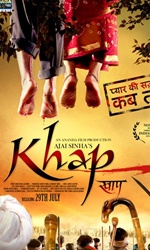 `Khap` a good attempt, but not engaging (IANS Movie Review)

Issue-based films tend to get themselves into trouble. And we don`t mean just the trouble caused by disgruntled parties, political or otherwise. The balance that needs to be struck between headlines and their cinematic interpretation often tends to get lost thereby defeating the noblest of purposes and the best intentions of conscientious filmmakers who look at the cinematic medium as more than just entertainment.

Ajai Sinha, who has his roots in meaningful television entertainment (serials like Astitva-Ek Prem Kahani and Hasratein), boldly takes on the theme of khap (community) justice in rural Haryana whereby any marriage between two individuals of the same gotra (clan) is punished by local village panchayats. It`s a powerful subject that needed a single-mindedly uncompromised treatment.

Sadly Sinha dilutes the theme with dollops of formula-baazi. There`s a teenybopper love-angle featuring two relative newcomers who need a crash-course in basic acting and grooming. The young lovebirds chat online with what they feel are sweet, cute and funny lines.

If only they knew! The entire treatment and development of their romance is redolent of amateurishness. Precious time is frittered away in gawkily composed and choreographed song and dances where the love birds coo sweet-nothings into one another`s ears.

You feel like pushing these two campus wannabes out of the way to watch the impending drama in a village of Haryana where the panchayat is a law unto itself.

The interweavement of characters into a dramatic circle embodying outdated customs and their clash with contemporary mores, could have acquired a greater validity if the narrative had focused more on hard-hitting rural prejudices rather than jejune urban affectations.

Om Puri as the village sarpanch is the pick of the plot. He gets the meatiest part with the best emotional graph. He doesn`t need to make much of an effort to make the part his own, and he doesn`t even try. Nowadays a kind of laziness has crept into distinguished actor`s repertoire.

It`s wonderful to see the talented Manoj Pahwa grab a pivotal role. Pahwa was hilarious as Ayesha Takiya`s delusional suitor in Wanted. Here he sinks into the role of a village elder who once watched his daughter being slaughtered for the village honour.

The film would have worked better with a more confident cast of younger players. The elders can only take the drama so far. Khap is finally betrayed by the wimpish and awkward portrayal of the urban young and by too many attempts to draw out a soap-opera-styled drama from situations that seem to plead for more finesse in presentation.

Nonetheless Khap should be commended for attempting a socially-relevant theme with some amount of detachment and equanimity.

Should love between cousins or people from within one family be sternly discouraged just because the village panchayat feels it is damaging to the social framework?

A contemporary tale of traditional massacre erupting in the heartland of central India where certain villages still follow cruel age-old customs. This is where a story of passion, dishonour and deceit unfolds; where the sweet innocence of youth is throttled by uncompromising beliefs.

The film opens in the capital where two youths Ria and Kush fall in love. Meanwhile, news channels highlight the death of Veer and Sureeli who are found dead in Omkar Chaudhary’s village. Ria has no idea that Omkar is her grandfather. Madhur, Ria’s father, had left his native village due to differences with Omkar over the ruthless pratha (tradition) of honour killings. Madhur is chosen to lead a commission to investigate the suspicious deaths of young Veer & Sureeli.

Veer’s father Daulat Singh is a staunch supporter of this pratha and is unmoved with his son’s death. However, Sukhiram, Sureeli’s father, is broken by his daughter’s demise. Will Sukhiram be weakened and reveal all to the Human Rights commission?

Torn between his love for his son and his strong belief in the pratha, Omkar promises Madhur that he would put an end to the ruthless killings in the village.

Ria and Kush are also pulled into the vortex of these inhuman customs.

How do the patriarchs of the pratha respond to these happenings? Does Omkar Chaudhary change for the sake of his granddaughter? These are the questions that the film attempts to raise.

Are we courageous enough to face the truth?