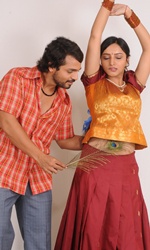 Something similar was tried in the Tamil film industry three years ago by a group of film enthusiasts who had no connection with the film industry and Subramanyapuram created waves and is still regarded as a trendsetter.

Subramanyapuram was made with unknown artists, but the film`s authentic presentation of lifestyle of people in Madurai in the 1980s and the performances of the artists were the high point of the movie.

Maharashtra`s Ganesha festival has become quite popular in Karnataka too and it is celebrated for three days in small localities, while big cities celebrations run for more than even a month.

It is interesting to see how celebration has become a competitive element for various organisers and how some times undesirable elements try to garner attention defeating the purpose. Nagendra Prasad has dug deep into this aspect to show how festivities unite people and bring some entertainment quotient to the poor and middle-class families.

Though Vinayaka Geleyara Balaga has borrowed the plot from a Tamil film, it is based on an incident that occurred in Prakash Nagar, a Bangalore suburb in the mid 1980s.

Lyricist-turned-director Nagendra Prasad has really done a great job in creating a right ambience for the film. He has also ensured a neat performances from artist, and good music and fantastic camera work to capture some fantastic visuals for the songs and fights for the film.

The film ends up as a total entertainer with pleasing visuals, music and catchy dialogues. VGB is certainly the best of Nagendra Prasad`s four directorial ventures so far.

But it is not a completely flawless film. The first half of the film surprises you with a refreshing and near authentic presentation, the director loses grip in the middle of second half where lot of unnecessary commercial elements have been given prominence.

But the film returns on the track in the end with a powerful climax and an excellent good devotional song about Lord Ganesha. The love element intertwined with the story starts off on an interesting note, but somehow it drags in the second half when the story takes several twists and turns.

Five friends, who live in Prakash Nagar, have been organising the Ganesha festival for past two years. Thier leader is Viji who is in love with a neighbourhood girl.

A dreaded don in the locality is advised by a local politician to organise a big Ganesha festival in the locality to earn some popularity, which would enable him to contest in the corporation election.

His goons warn Viji and his friends to stop making arrangements, but Viji and company convinces the don to let them go ahead with the preparations by telling him that if they won`t do it for the third time, it would invite the wrath of the god.

Vijaya Raghavendra sleep walks in his role. He is very good in both emotional and comedy sequences. Meghana Gaonkar is aptly cast for the role. She looks gorgeous in the songs.

Naveen Krishna has done a very good job, but it is veterans Rangayaan Raghu and Shobharaj who steal the show. Gurudatt shines as the don.

Safety Prakash`s steady camera work is a major attraction of the film. Hari Krishna composes three fantastic songs including the much popular Yaarivali Hudugi and the devotional number Vakrathunda.