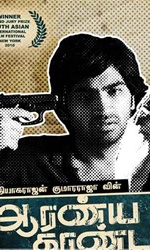 Debutant Thiagarajan Kumararaja`s Aaranya Kaandam, which won the Grand Jury Award for best film at the South Asian International Film Festival, gives a realistic account of the world of gangsters.

The film begins with a quote - Anything which is the need of the hour is dharma - supposedly by legendary Chanakya in 300 BC. As expected, the film is based on the same philosophy.

The movie opens with an old man trying to make love to his young wife in vain. His frustration finds an outlet in violence and the girl asks him, Why do you beat me for your inability? The scene shifts to outside the house where a set of goons are chatting. The man inside the house may be incapable of having sex, but he is a don.

Welcome to the darker side of Chennai, north Chennai to be precise. Producer S.P. Charan and director Kumararaja have tried to tread on a new path - the path of harsh realism.

The director has chosen to show us the cruel world of gangsters and the narrative does full justice to the theme. He has avoided cliches and any deviation in the name of comic relief or romantic flavour.

Pasupathy brings up a proposal to outsmart Gajendran by appropriating a narcotics parcel sent for the latter. His plan is perfect but Singam doesn`t want to take any risk. Pasupathy teases his master by citing his age as the reason for the cautious approach.

The don gets angry and decides to eliminate his lieutenant. After all, anything that is the need of the hour is dharma. Pasupathy somehow escapes from his clutches. Pasupathy is now being hunted by two gangs and he is running to save his life.

The side track involves Singam`s wife Subbu (Yasmeen Ponnappa) and Sappai (Ravikrishna), a weak man, the object of fun in the gang. Subbu uses Sappai to get out of her sexual frustration. She even tries to escape from the clutches of the old man. Anything which is the need of the hour is dharma.

Meanwhile, the narcotics parcel accidentally lands in the hands of a poor man. The man is full of pride but his son is quite pragmatic and clever. While the father is caught by Singam`s gang, the son escapes with the parcel and tries to save his father.

The paths of the boy and Pasupathy intersect and the latter grabs the chance to change his fortunes. He uses the boy`s plight to save his life. Anything which is the need of the hour is dharma.

The movie is made without much loopholes or cinematic liberties. The climax fight stands out while the scene showing the poor father and son weeping in the street touches your heart.

The lone drawback is that the theme fails to rise above the realm of the chosen backdrop.

In terms of acting, Jackie Shroff in the role of a rusty don steals the show with his matured and flawless performance. Sampath Raj is not far behind. Even Ravikrishna has rendered a decent performance in a different role while Yasmeen Ponnappa is quite impressive as a deprived girl turning to be a schemer.

The dialogues are realistic and philosophical. The background score by Yuvan Shankar Raja adds a new dimension to the narrative (the movie doesn`t have any song). The editing of Praveen K.L. and Shrikanth N.B is stylish and in sync with the genre. Cinematographer Vinod has added credibility to the script with his camera angles and colours.

Thiagarajan Kumararaja has given us a gangster movie which stands out with its realistic portrayal and no-nonsense treatment. Good performances, effective dialogues, slick editing and amazing camerawork help the movie stand out from the crowd.