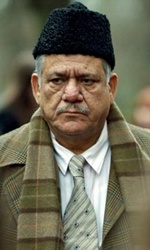 Twelve years have passed since East Is East, the cult film on the blithe angst of the Asian diaspora in England, was made. In the sequel, which, let me quickly add, is a decent engaging and warm follow-up to the original film, the time-passage is condensed into a far more manageable time frame.

The captivating device whereby we suspend our disbelief about the characters` ageing process and look at them 12 years hence as though just four years have passed, works gloriously to the narrative`s advantage.

So here we have the insufferably boorish, selfish and intolerant Pakistani-Britisher Jahangir alias George Khan (Om Puri). For those who came in late, George, who is married to an English woman, has sent his eldest son to get culturally accustomed in Pakistan. Now it`s the younger son Sajid`s (Aqib Khan) turn.

The younger Khan boy Sajid`s incredulity, bafflement, disgust, disbelief and slow acceptance of life in rural Pakistan -- the film was actually shot in rural Punjab in India -- comes across in scintillating spurts of cultural humour.

Admittedly Aqib as the young British-Pakistani boy Sajid brings oodles of unhampered naturalness into the picture. There`s no playing-for-effect here. Aqib plays Sajid as any culturally-challenged boy brought up in the West now faced with acres of unploughed Pakistani land and the ungainly sight of his eager-to-belong potbellied father trying to show skills with the bull.

It`s a terrific occasion for humour on the malady of cultural displacement. Director Andy deEmmony milks most of the situations in Ayub-Khan Din`s clever script for all that they are worth. Many situations, such as that quietly explosive `dialogue` between George`s British and Pakistani wives where neither seems to understand each other`s language and yet knows what the other is saying, are so empathetic and expressive in their undercurrents that you forgive the excessive zeal shown by the art-director in creating the bazaar-like bustle of the large joint family.

Often you feel the production design and the characters border on the touristic. The accents range from the strange (Vijay Raaz) to the strained (Om Puri). The actors playing Sajid`s rustic chum and the village seer seem straight out of Rudyard Kipling`s imagination. What redeems the awkward slices of storytelling is the overall warmth and sincerity of presentation.

Agreed some false notes are stuck. But the final tune of life strung in vibrant verses singing about a man trapped between two incompatible worlds rings true and melodic.

The dilemma of a man caught between two worlds, cultures and wives is caught in an arresting arc across the characters. The performances are uniformly compelling.

Om Puri takes up the role that he left behind 12 years ago without missing a beat. The Pakistani-British accent could have been a little less pronounced. But Puri plays the bigoted cultural anomaly with relish. His two screen wives Angela Bassett and Ila Arun confer a comforting credibility to the goings-on.

Ila has some brilliantly-written scenes which she digs into with carnivorous passion.

But it`s young Aqib Khan as the free spirited, rebellious but good-hearted British boy discovering the joys of rural Pakistan in the company of a local boy, who could do with lessons on how to avoid imbibing bravura from cheap Pakistani films, is the prized discovery of the show.

Some of the locational details are tenuous - Why is the Bollywood hit `Piya tu ab to aaja` from 1971 playing on the soundtrack of Pakistan in 1975? Why do the locals speak in English? And why does the village seer behave like Saeed Jaffrey in recession?

The overall sincerity of the storytelling doesn`t allow us to dwell on trivial incongruities.

West Is West provides an endearing slice-of-life entertainment even if you haven`t seen the other film.