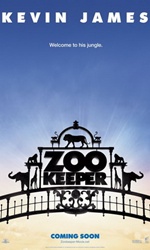 `Zookeeper` disappointing, go to the zoo instead

There`s something particularly charming about literally hearing animals talk to humans, a sub-genre pioneered by Hollywood. To thus see such a film fare so badly with its cliche, is indeed a real treat.

Griffin (Kevin James), a zookeeper, is great with his animals but miserable with girls. The animals, concerned about the love life of their beloved keeper, conspire amidst themselves to get him hooked. However, when their plan fails, they break the only code they have in the animal world: to never speak like humans with humans even though they can very well do so.

There`s not original bone in the body of our Zookeeper. And that is a shame considering that despite many such films previously, there was scope to be original, at least with the story. Instead the story spirals down the roller coaster at breakneck speed with a predictable plot, sub-plot, situations, humour and everything else that comes in between.

What comes out in the end hence, is a story that is too immature for adults, and with its crude jokes, unpalatable for young audiences. The film thus lands smack in no man`s land.

Yet, for those who like and love animals, it has its funny though forgettable moments - funny because animals syncing their lips to human dialogues is interesting to watch; forgettable because the lines and jokes that the five writers choose to put in their mouths is bad, crude and hackneyed from top to bottom.

What`s worse is that even the physical antics of the humans and animals aren`t funny or goofball enough to raise even a chuckle.

Instead all it raises is a been-there-done-that feeling. Why? Because you have indeed been there and done that in countless other films, much better than our poor and dull zookeeper starring in a poor and dull film.

Much of the problem of the film is in the second half. Though cliched, the first half is bearable but it is the rush of the second that does the film in.

Dr. Dolittle wasn`t great, but it was good. Don`t expect this film to even do little to humour you.

Yet if you love a giraffe screaming Mayday, mayday or a gorilla go on a city outing and fooling humans including a hot chick into dancing with him, or love to hear some star voice-over cameos (Sylvester Stallone, Cher, Adam Sandler and Jon Favreau among others), this is a film for you. If not, you`d be better off with a trip to the zoo.