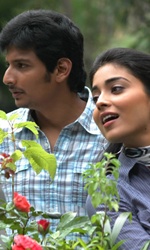 `Rowthiram` too long to be entertaining (IANS Movie Review)

Director Gokul`s Rowthiram, starring Jeeva and Shriya Saran (who is seen after a long time in a Tamil film) tells you the eternal fight between good and evil forces with the protagonist acting as an one man army, conforming to Tamil commercial films.

The film portrays an old yet gritty man (Prakash Raj in a cameo) training and motivating his eight-year-old grandson, Shiva, to fight against evil forces with fury and guts. The grandpa dies and the boy grows up. Shiva (Jeeva) becomes an one man army and takes on the rowdies who play havoc in the lives of hapless and helpless public.

Priya (Shriya Saran), daughter of an Assistant Commissionaire of Police, is awestruck seeing this young man taking on the goons who molested a girl. She loves his braveness and soon falls in love with the man himself.

In the film, Shiva`s family is a type cast of commercial films. It consists of two brothers and a sister, who is full of fun and love. The typical middle-class family fears about Shiva`s safety and discourages him from fighting for justice.

Some law college students, who were beaten up by Shiva, approach a gangster who promises to help them. But they want some time to swing into action as their leader Gowri is in jail.

There is another gangster Kittu (Ganesh Acharya) who is Gowri`s rival. He is waiting for the right time to eliminate Gowri.

Shiva accidentally bumps upon Gaowri, who conducts a kidnapping operation after his release. Shiva hurts him badly. Gowri`s face and his ego are hurt badly. He wants to take revenge. Predictably Kittu offers help to Shiva, but he is killed by Gowri.

Shiva is now left alone. Virtually. He has only one support - his ladylove. She forcibly marries him unmindful of the impending danger. Now her father uses his police force to save Shiva but Gowri`s network is so powerful that it could penetrate anything.

Gokul`s execution of scenes is commendable. He also tries to make the narrative different by mixing up many things within the script. But since the premise is old, the developments are quite predictable. This predictability mars the impact.

He has done meticulous homework to depict the functioning of the goons and paid killers, but he could have been a winner had he chosen a new story. He opts for a shocking end with a message but it turns out to be unwarranted. The film`s length (two hours and 45 minutes) is not justified by the turn of events.

The fun filled moments in the first half involving the family members and the events related to the marriage in the family are enjoyable.

We have seen Jeeva (and many more Tamil heroes) doing the same thing many times in the past. Practice makes one perfect and hence you can`t find any fault in Jeeva`s acting.

Shriya, who is also well experienced in handling the glam doll roles, gets a slightly different character of supporting the hero for his braveness and righteous anger. The character is even ready to die for the fight against the goons. Shriya is credible in such a role. She provides some romantic touch to the movie full of furious fists and blood soaked sickles.

The supporting actors including Jayaprakash, Lakshmi, Srinath, and Sathyan have done their respective jobs neatly. Sathyan and Srinath provide comical relief (thankfully) in the first half.

Among the group of baddies Ganesh Acharya impresses with his bulky figure and strange accent. The guy playing Gowri`s role is amazing.

Prakash Nikki`s music is just about okay with Maalai Mangum Neram standing out. The peppy song Golly Moro is appealing.