Red Riding Hood is a Hollywood - movie directed by . Starring . 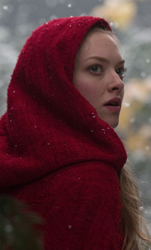 With the global popularity of "Twilight", director Catherine Hardwicke has become a hot commodity. Sadly, the franchise decided to go the "Harry Potter" way and have a new director direct each film. The result? Catherine returns, and attempts to create another "Twilight" with her next film, but only with partial success.

In simple terms, "Red Riding Hood" is the teenage adaptation of the children`s fable by the same name where a wolf impersonates a little girl`s grandmother to eat both up.

A medieval village has been plagued by a werewolf that rises during full moon night for generations. Peace has been maintained as the village offers the werewolf its best animals. However, when Valerie`s (Seyfried) sister is murdered, the villagers are terrified.

Valerie finds herself at the centre of the drama involving her two suitors Peter (Fernandez) and Henry (Irons) even as Father Solomon (Oldman), known for slaying werewolves, comes to the village to save them. Solomon explains that the wolf is amidst them in human form. As the search expands, Valerie finds herself suspecting everyone - from her family to her lovers and her friends. Who is the wolf and what does it want from Valerie?

Though predictable for discerning viewers, the film does manage to keep the suspense going and round it up convincingly in the end. The problem, however, is in its intention.

Director Catherine Hardwicke obviously wanted to recreate the "Twilight" magic. However, despite getting a good lead in Amanda Seyfried, her choice of male leads lets the film down. Neither do they have the cuteness factor of the two leads in "Twilight", nor is it a broody teenage-angst story to allow for this discrepancy. The story has to rely on the suspense, which does manage to hold attention.

The idea, as you will figure in the end, was to have a movie franchise. The problem with this is that unlike "Twilight", which is primarily a love story, this one`s a thriller which hinges on suspense. A sequel, if any, will have viewers expecting the same and to turn it into a love story now would perhaps be ill-advised.

Also unlike "Twilight", the film uses very crude and un-cinematic techniques to tell different stories, like the irritating way of using dialogues to do the same instead of showing or implying it. There is no time here for cinematic enunciations or creation of mood that jars an otherwise credible story.

For decades, the people of the village of Daggerhorn have maintained an uneasy truce with the werewolf, who prowls at every full moon, by offering the beast a monthly animal sacrifice to quench its appetite.  But under a blood red moon, the wolf changes the stakes by taking the life of one of their own.

The victim is the older sister of Valerie (Seyfried), a beautiful, young woman, who has just found out that her parents (Burke and Madsen) have arranged for her to marry Henry (Irons), the scion of the town’s wealthiest family.  But Valerie wants only Peter (Fernandez), the poor woodcutter she has loved all her life.  Unwilling to be parted, the couple was planning to run away

As the townspeople hunger for revenge, famed werewolf hunter Father Solomon (Oldman) is summoned to Daggerhorn to kill the beast once and for all.  But Solomon’s arrival brings only more turmoil as he warns everyone that the werewolf takes human form by day and could be any one of them.  No one is above suspicion.  Panic grips the town as the death toll rises with each red moon, tearing apart the once close-knit village.  But it is Valerie who discovers she has a unique connection to the wolf that inexorably draws them together, making her both suspect…and bait.