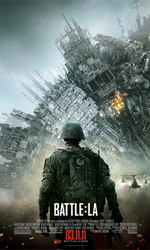 There is nothing original about World Invasion: Battle Los Angeles. In brief, it is Independence Day meets Cloverfield meets Black Hawk Down meets Saving Private Ryan with state-of-art special effects thrown in. And this, as you would have guessed, makes it a fun film, a total value-for-your-money movie.

Gulf War veteran Marine Staff Sergeant Michael (Aaron Eckhart) has put in his papers. But when the world is under attack from an alien race, he unwillingly becomes part of a platoon with zero combat experience to fight an enemy with superior power.

As things escalate and most of the air power of the United States is wiped out, it is up to the Staff Sergeant to command the inexperienced group of soldiers and a few civilians to safety.

Along the way, he discovers he could be the key to defeating the undefeatable aliens and as the world is retreating to a defence, he and his motley band of soldiers, decide to go on the offensive.

World Invasion takes itself less seriously than even the fun-film Independence Day. If you consider the patriotic rhetoric of that film, this is a good thing. And there`s no politics of Saving Private Ryan either. Though there is a hint of politics when the reason for the invasion is believed to be the one resource that the earth has an abundance of - water - and an expert claims on TV, Rule of colonisation states that you wipe out the indigenous population. Right now we are being colonised.

There was a scope to throw in more of how dominant nations have been doing to their colonies what the aliens are doing to earth - decimating them. That would have made the film much more exciting.

World Invasion has almost every conceivable cliche of the alien/monster/war movie genre. This would have made the film boring had it not been for the gritty ground zero view of a war zone, a la Black Hawk Down and Saving Private Ryan, some breathtaking cinematography and some of the best and most believable special effects in Hollywood.

Thus you have the usual sacrifices just at the right time, the fight over who`s in command, an unresolved enmity, an unsure commanding officer, a band of brothers unwilling to leave the wounded behind, the usual teasing where you are not shown the full view of the alien for long, a civilian with just the information needed at crucial times, the expected twist in the tale a little after centre point, the usual last crucial missile shot that can save the planet etc.

Yet, despite its slightly longish take at over two hours, the film does not get boring or lose momentum at any point.

Director Jonathan Liebesman who has given some forgettable films, finally makes one that would be remembered. Writer Christopher Bertolini, who seemed to have disappeared after his delightful screenplay of The General`s Daughter, over a decade back, resurfaces with this film that is just the beginning of a franchise.

At the Camp Pendleton Marine Corps Base outside of Los Angeles, CA, a group of marines, lead by Sergeant Michael Nantz (Aaron Eckhart), are called to respond immediately to one of many coastlines under attack across the globe. Sergeant Nantz and his corps go into fierce battle against ocean born aliens that are determined to overtake the water supply and destroy everything in their path.