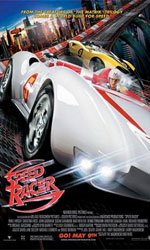 Ratings: ***
The enduring quality of action/adventure classics like the Lord of the Rings and Matrix trilogies is that they infused high-powered action with a soul. They thrilled us visually but also made us feel and think. Speed Racer, the new summer action flick by the Wachowski brothers, is loaded with eye candy but sadly is too disconnected to make any sort of lasting impact.

The Wachowski brothers, of Matrix fame, skilfully blend visual, camera and computer generated styles. But this comes at the cost of character development and the movie ends up being hollow. Each scene is splashed with colour and the constant need to wow and impress permeates throughout.

There are some nifty new techniques like a wipe across the screen as events relating to the character unfold. It is impressive initially but becomes a drag when it gets repeated countless times.

The plot revolves around Speed Racer (Emile Hirsch), who is part of a proud car racing family. His brother, a champion racer, leaves home one day and dies in a race. As Speed`s winning ways continue, he is approached by a greedy corporate honcho with an offer. But when Speed turns it down, the boss vows to destroy the family.

Speed now enters into the underbelly of the sport where he finds out that races are fixed and he sets out to save his family.

The story never slows down enough to require jumpstarts. The movie is fast paced with just the right number of races inserted in to keep energy levels pumping. But the single greatest tragedy of the race scenes are that they completely fail to take us in. We see cars whizzing by and crashes and eye-popping effects, but it all seems too distant. We never once feel we are in the driver`s seat experiencing his thrill.

Like most action movies focused on merely wowing us with visuals and sounds, the actors here suffer as casualties. Oscar winner Susan Sarandon plays the mother but she is a far too intelligent actress to be stuffed into such a caricature.

John Goodman plays the father but he too suffers having to serve a weak script. Hirsch, after having impressed in the independent film Into the Wild, displays almost no emotions and is expressionless most of the time. This movie may not quite catapult him into stardom.

Young boys might respond positively to the film but girls and adults might be disappointed that even the love story subplot is flimsy. Christina Ricci too does not impress playing the girlfriend Trixie.

The warmest scenes are of the family at home. These scenes work largely because just for a while the directors stop trying to impress and let the scenes play out.

Speed Racer will just satisfy those looking for pure entertainment and money`s worth of colour, sound and speed.

Born to race cars, Speed Racer- (Emile Hirsch) is aggressive, instinctive and most of all, fearless. His only real competition is the memory of the brother he idolized, the legendary Rex Racer, whose death in a race has left behind a legacy that Speed `s is driven to fulfill. Speed is loyal to the family racing business, led by his father, Pops Racer (John Goodman), the designer of Speed`s thundering March 5. When Speed turns down a lucrative and tempting-offer from Royalton Industries, he is not only infuriates the company`s maniacal owner (Roger Allam) but uncovers a terrible secret - some of the biggest races are being fixed by a handful of ruthless moguls who manipulate the top drivers to boost profits. If speed won`t drive for Royalton, Royalton will see to it that the March 5 never crosses another finish line. The only way for speed to save his family`s business and the sport he loves is to beat Royalton at his own game. With the support of his - family`s and his loyal girlfriend, Trixie (Christina Ricci), Speed teams with his one-time rival the mysterious Racer X (Mathew Fox) - to win the race that had taken his brother`s life: the death-defying, cross-country rally known as The Cruciable.