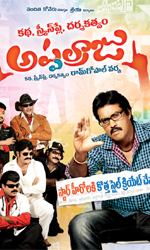 After a long gap, maverick director Ram Gopal Varma has returned to Telugu films with KSD Appalraju. After making Raktha Charitra in three languages using artists from Bollywood and the southern film industry, he is out with KSD Appalraju, which he has written as well as directed.

Varma has always been considered a trendsetter in the Telugu film industry for making films like Shiva and Kshana Kshanam . It is Varma who influenced many young talents like Krishna Vamshi, Puri Jagannadh and Harish Shankar to try out innovative things in movies.

With such a fantastic background, Varma`s Telugu fans expected something fresh from him in KSD Appalraju, which the director described as a comedy. But in a note at the beginning of the film, he had said he lied about the film`s gnere.

This honesty should have been clear in narrative as well, but sadly what the viewer is made to see is Varma`s bias about some known superstars, critics and a couple of bigwigs of Telugu filmdom.

Varma even makes fun of his own films and it brings few laughs, but that does not enhance the quality of the film. Varma`s poor screenplay and ordinary dialogues are the major drawbacks.

He has assembled an array of well-known talented comedy artists in the film. There is no cheap comedy in the film, it is a spoof on the way Tollywood works. And the ruthlessness of the industry representatives, their self-indulgent attitude and selfish motives are portrayed well. His honesty in presenting the nexus between producers, underworld bosses and not-so-popular actresses is to be commended.

Varma`s protege Ravi Teja, superstar of the Telugu film industry, also makes an appearance in the film. Despite all the high points, KSD Appalraju is a let down because it does not sound like an intelligent and delightful satire, rather ends up as some incoherent rumbling of a frustrated film personality.

Viewers are sure to miss the Varma magic that mesmerised them 12 years ago. More or less KSD Appalraju is the garbed version of many of his films like Rangeela.

Varma has also ruined the film by overemphasizing key factors.

Brahmanandam`s character starts off well but as the film moves towards an end he becomes irritating. It is also evident that some of the sequences are irrelevant. Varma seems to be confused about the ending and this is evident from the way pre-climax is handled.

His experience during his journey to be a director as well as during the making of the film forms the main content in the story.

Technically, the film is not brilliant and doesn`t match up the standards that Varma has set in many films like Sarkar, Company and Rann.

Varma is certainly inconsistent and KSD Appalraju proves it.