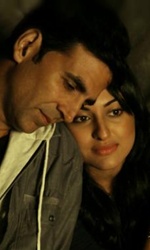 `Joker`: A fun original village tale of aliens (IANS Hindi Film Review)
Rating: ***
Imagine if Shah Rukh Khan left his posh job at NASA in "Swades" and returned to a village filled with escapees from a lunatic asylum and you have the basic plot structure of Shirish Kunder`s "Joker", a film as crazy in intent as its characters make the proceeedings appear to be.

The film is fun to watch when it isn`t trying to be too clever for words, or when it isn`t tripping over with its tongue-in-cheek smart-ass humour. The characters are uniformly self-deprecating. Some of the material connected to an outsider helping set a scrambled village in order through mirthful masquerade echoes Farah Khan`s "Tees Maar Khan", though this time Akshay Kumar plays a far more `serious` character.

He doesn`t even have a romantic duet with his co-star Sonakshi!

I wonder why Akshay Kumar chose to distance himself from this film! He has done much worse comedies in his career. Crass, loud, inane, repetitive and unfunny ones. "Joker" is none of these. The humour is never below-the-belt.

Its big USP is its audacious originality. A village named Pagalpur that has been wiped off the Indian map during the British Raj, a scientist-hero who is trying to make contact with aliens, a heroine who has nothing to do except stand attentively listening to her live-in partner`s crazy schemes to bring aliens down to earth, and a village filled with crazy maladjusted anachronistic oddballs for whom the clock stopped ticking 50 years ago - these populate Kunder`s kookie kingdom.

There is an arresting sense of frozen farce in the proceedings. The characters are so silly they end up being distant avatars of the zonked-out villagers in Farah Khan`s "Tees Maar Khan". The spoofy ambience is painted in believable shades. The film is shot an interesting shades of iodized sepia which creates a sense of fading flamboyance in a location where the characters have lost their sense of time.

Beneath the veneer of joviality the film has a serious message on the malnourished state of rural India. Politicians are shown to be so conniving and caricatural, they seem real! Likewise the `aliens`, actually villagers dressed in pumpkins and other fruits to attract outside attention, are so clumsy they look more aliens than real aliens.

"Peepli Live" gone berserk, "Joker" is funnier and less vulgar than a lot of the over-the-top situational comedies that rely on double meanings, cleavages and gay-bashing to tease titters out of a comatose script.

Not everything in "Joker" works. Some of the material echoes the calibrated linear movements of a televidio serial with our hero Agastya aka Sattoo moving from one place to another with the villagers in tow.

Yet setting aside the aimlessness the film gradually builds to a moderate momentum where we don`t need to feel cheated by a film that splits the comedy genre wide open without fracturing the farce. The jokes hold up.

And so do some of the performances. Shreyas Talpade as a gibberish-mouthing villager who gets all weak kneed in front of journalist Minissha Lamba, steals every scene from Akshay Kumay whenever they are together.

Could this be the real reason why our Rowdy Kumar decided to distance himself from this film? Like it or not "Joker" is a masterpiece compared with Akshay Kumar Blue or Thank You.

Flawed? Yes. Seriously so, specially in its failure to pin the aliens` theme down to a manageable streamlined structure. That apart, "Joker" is an utterly original parable on rural development, done with lots of colour, vibrancy, attitude, gusto and giggles.

Actors Amitabh Bachchan and Aamir Khan, who are working together for the first time in "Thugs Of Hindostan", are among the nominees for the Best Actor - Male category at the Indian Film Festival of Melbourne 2017.Read More

'Joker' trailer to release with 'Cocktail'

The first trailer of Shirish Kunder's "Joker", which is reportedly Akshay Kumar's 100th film, will release along with Homi Adjania'sRead More

Ever wondered if aliens were to visit a village that is not on the map of our country, what hell would break loose?! Joker is the story of Agastya (Akshay Kumar), a researcher probing the existence of aliens in the universe, who returns to his small little native village. The out of luck Agastya takes it upon himself to put his crazy village on the global map and continues with his alien exploration from there. While his plan gets the village attention from across the world, it also comes with a great deal of risk. Will aliens save the day for Akshay? Or will his plans fall like a pack of cards? Get set for India?s first ever extra-terrestrial drama-comedy - Joker! 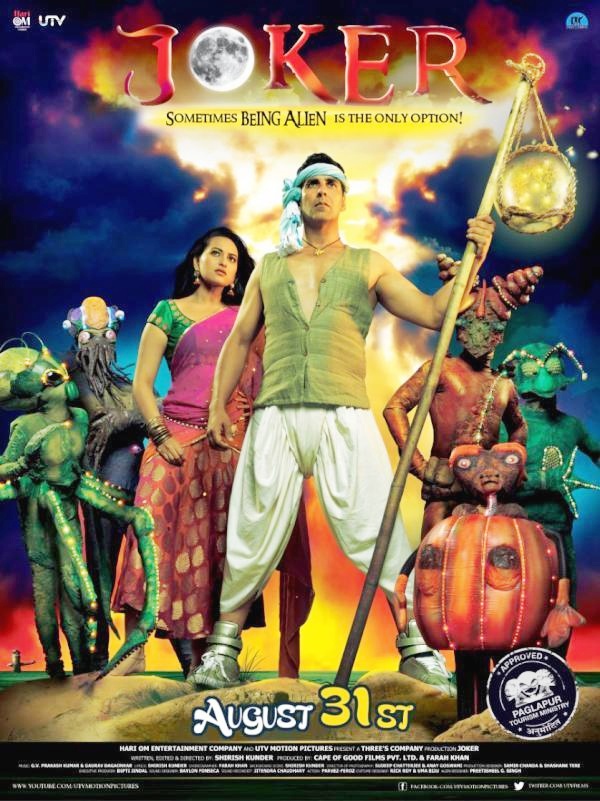 Promotion of Joker on the sets of Dance Ke Superkids