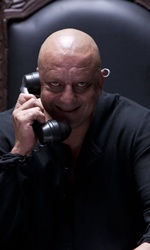 `Agneepath` is brilliant in its brutality (IANS Review)

Long before the damsel in the den Katrina Kaif signs her writhe petition `junta ke naam`, the film`s imposing villain and by extension the film, have written their destiny. In bold bloodied letters. E-mail didn`t exist in the 1990s.

Sanjay Dutt as Kancha lording over a no-man`s-land called Mandwa where the only law that exists is lawlessness is so formidable in his vile antics, you fear for the hero, a decent bloke with eyes that tell a million untold stories.

Hrithik Roshan opts for a perfectly-tuned low-pitched performance to offset Sanjay Dutt`s larger-than-life diabolism. The combination of the flamboyant and the understated works.

This is Agneepath Retold or Agneepath Deconstructed. Either way, the revenge formula never seemed more rousing in its invocation of Good and Evil in their most elementary avatars.

Debutant writer-director Karan Malhotra has chosen to restructure one of the most complex but unsuccessful Amitabh Bachchan starrer. The plot leaps at you through its sanguinary design, building brick by brick an edifice of low-life and high-drama.

This new-rage Agneepath retains the core of Mukul Anand`s failed drama. And yes, it retains Harivnansh Rai`s Agneepath poem, though, alas, we don`t get to hear Amitabh Bachchan recite the lines.

Karan Malhotra`s script alters many of the original`s dramatic moments, adds new characters (most notable among them, Rishi Kapoor`s Rauf Lala), and finally fine-tunes and assimilates the plot`s subliminal statement on crime and retribution to a pitch where we often hear the screaming protests of social inequality through the protagonist`s pain-lashed expressions of angst, disgust and rebellion rather than his words.

Hrithik Roshan opts for a subdued interpretation of his vengeful character where he could`ve easily been larger-than-life. He lets Sanjay Dutt take charge of the blizzard of the bravura.

Sanjay Dutt is delightfully in form. During the Chikni chameli song when he quizzes the newly-arrived Mandwa-resident Vijay on why he`s where he is, Sanjay`s eyes go from the molten to the melting...His best in years.

But the finest performance comes from Rishi Kapoor. Playing a loathsome flesh trader and drug dealer who takes Vijay under his wings, he delivers a bludgeoning homage to skin-crawling villainy. A glorious departure from his lover-boy image.

The prolonged sequence where Hrithik Roshan takes on Rishi Kapoor is the single-most riveting episode of filmed violence in Indian cinema since Gabbar Singh`s mayhem over the Thakur`s family in Sholay.

Agneepath works so wonderfully within its high-voltage `masala maad-dhaad` genre because of the actors who instinctively grasp the street-level gut-wrenching grammar of Malhotra`s storytelling.

Barring Priyanka Chopra who seems strangely cosmetic in a land of looming credibility, every character shines through the crime-drama maze.

The action sequences by Abbas Ali Mogul convey rawness. Every blow that Hrithik Roshan so manfully receives on his chin makes you flinch. You wait for him to give back as good as he gets.

This is not a film for the faint-hearted. Its basic structure and the leitmotif of the `tree of death` (where Vijay Chauhan`s father was hanged and where his wrongdoer will finally meet his nemesis) draw audiences into a vortex of viciousness and sadism.

This is a dark brooding world; this is a world where the laws of retribution and redemption are re-written according to who rules the underworld. This is Agneepath where the poet gets hanged and the pervert gets promoted.

Karan Malhotra revels in the language of commercial Hindi cinema. The characters in Vijay`s chawl are all good-hearted. Every character in Kancha`s kingdom is a creep or a coward. The battle lines are tightly drawn. The pace is breakneck.

The mob scenes of violence and religion often merge on the streets of Mumbai and in the lawless backwaters of the imaginary Mandwa. The narrative features a Gokul Ashthami matki-breaking sequence at the start and a Ganesh visarjan sequence towards the end, both shot spectacularly on Mumbai streets.

The background music is a suitable banshee of memories and pain. Since Hrithik Roshan has chosen the language of understatement to portray the wronged wounded social outcast Vijay Dinanath Chauhan, it is up to the eloquence-level of the soundtrack to supplement the hero`s stunning silences.

Every component of the film falls into place, with a resounding thump. Agneepath is brilliant in its brutality. It`s a riveting and hectic homage to the spirit of the cinema when revenge reigned supreme. And content was King. This new Agneepath takes us back to the era when there was no computer or cellphones. And communication with the audience was immediate and electrifying.

Relive that tingling sensation of watching the hero get his groove back. In gory detail.

I try to bring positivity even to negative roles: Pankaj Tripathi

Seasoned actor Pankaj Tripathi, who will be seen as Kehri Singh in noir thriller "Gurgaon", says his attempt is always to lend a positive streak even to a negative character that he plays.Read More

In a small Indian village Mandwa, Vijay Dinanath Chauhan (Hrithik Roshan) is taught by his principled father about the path of fire - AGNEEPATH. His life is completely shattered when the evil drug dealer Kancha (Sanjay Dutt) hangs his father to death. Vijay leaves for Bombay with his pregnant mother and has only one mission in life - to come back to Mandwa and bring back the glory to his father`s name.

In Bombay, 12-yr-old Vijay is taken under the wings of the city gang lord Rauf Lala (Rishi Kapoor). From then on it is a journey of revenge where he makes and breaks many relationships only to get closer to his aim. Vijay finds support only in his best friend Kaali (Priyanka Chopra), who stands by him at every moment in his life. Fifteen years later his hatred for Kancha takes him back to Mandwa where life comes full circle. 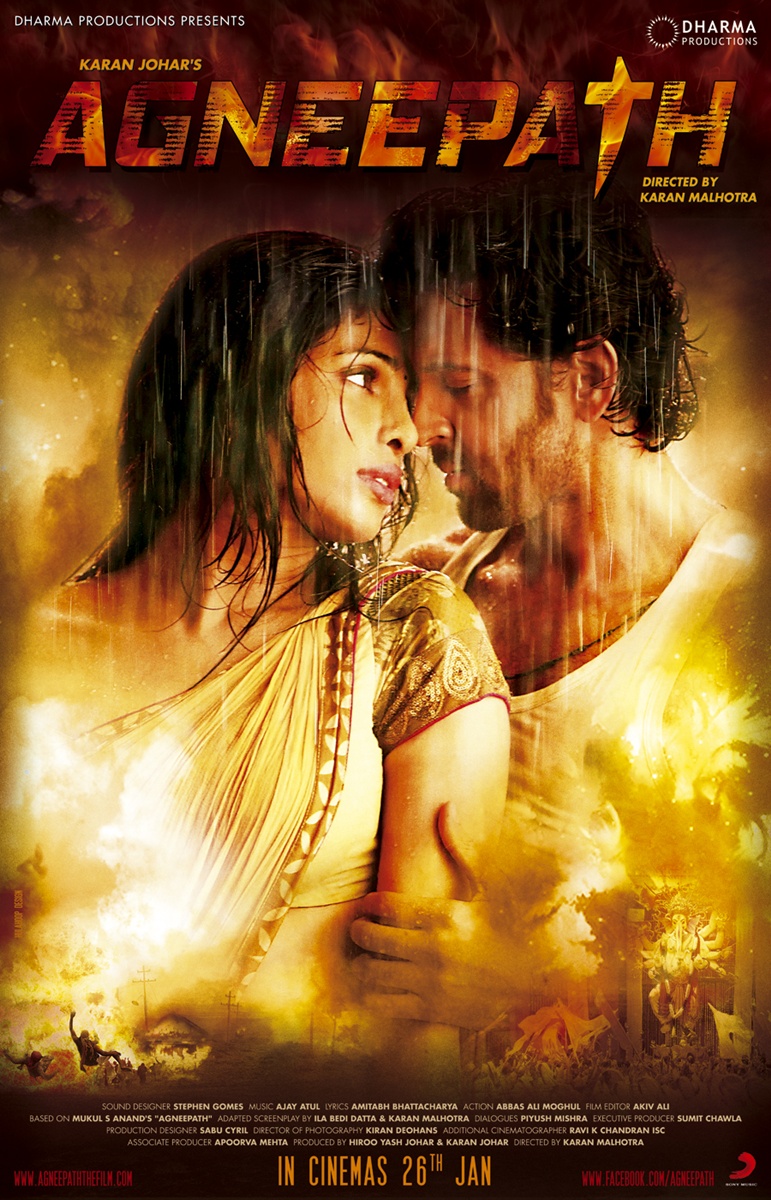 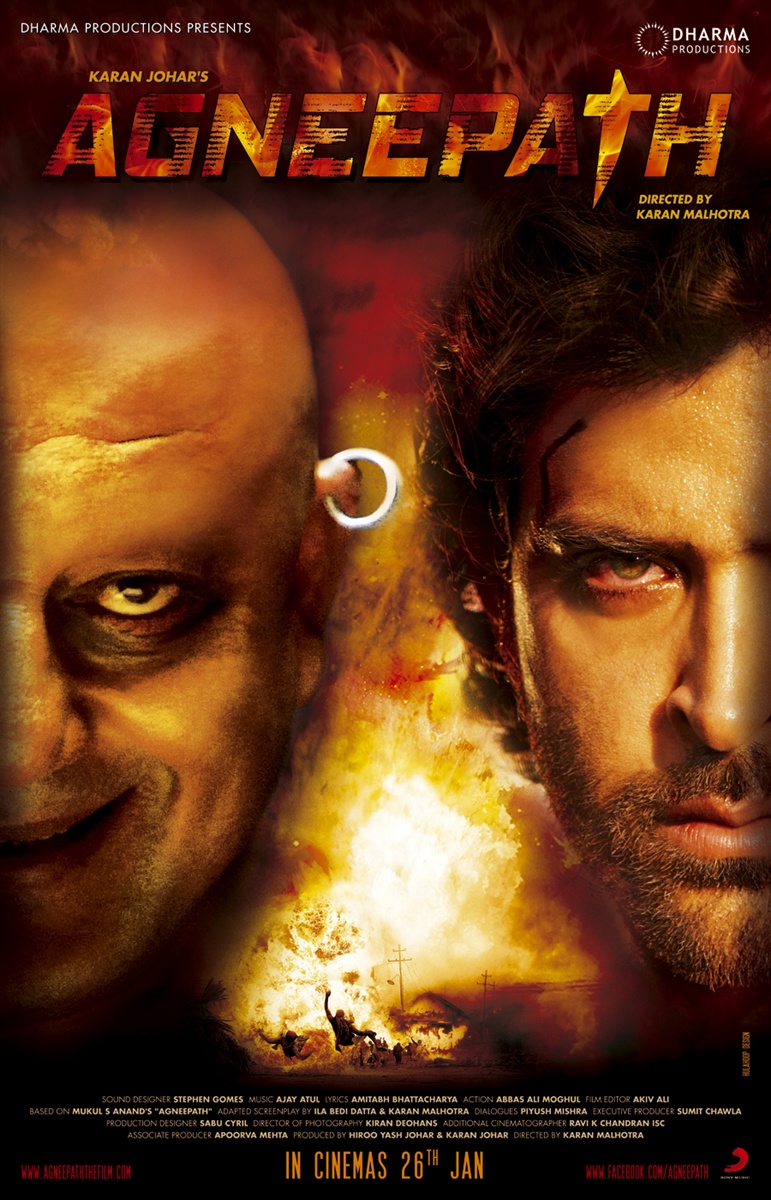 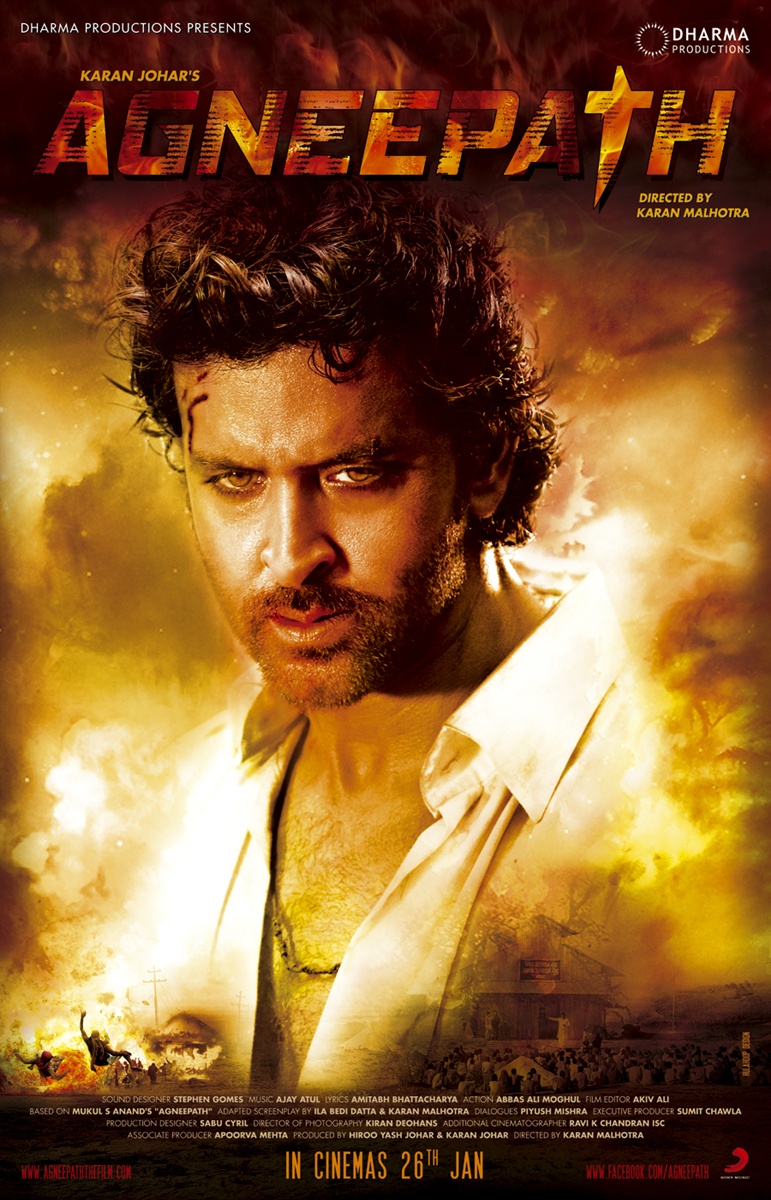 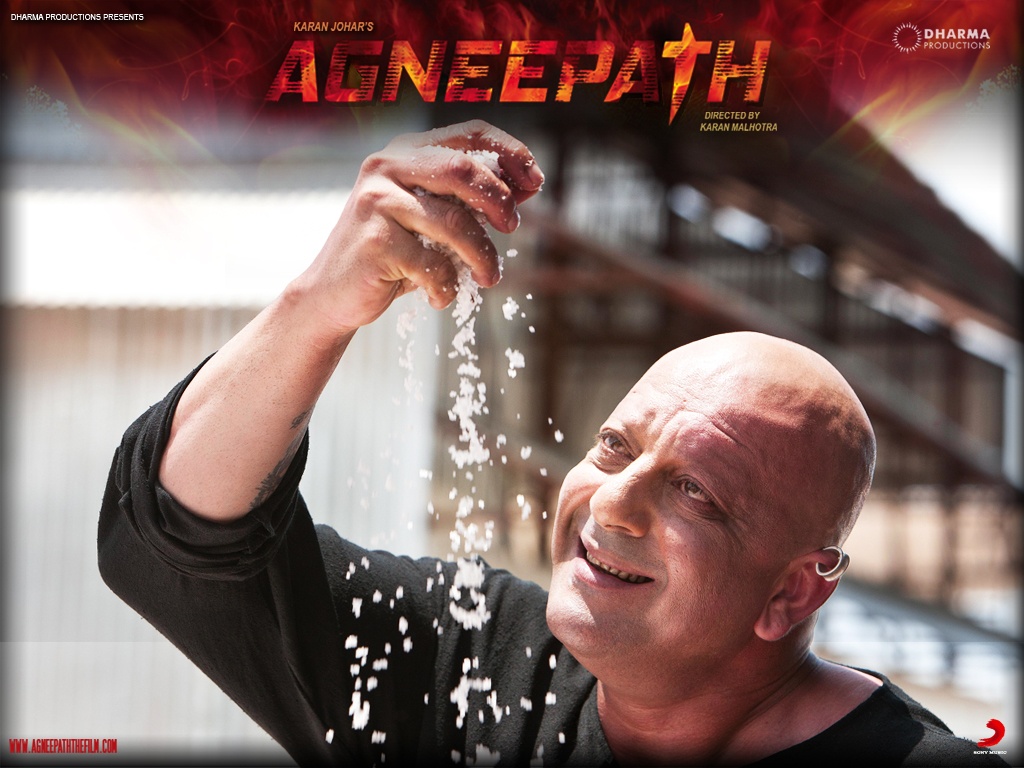 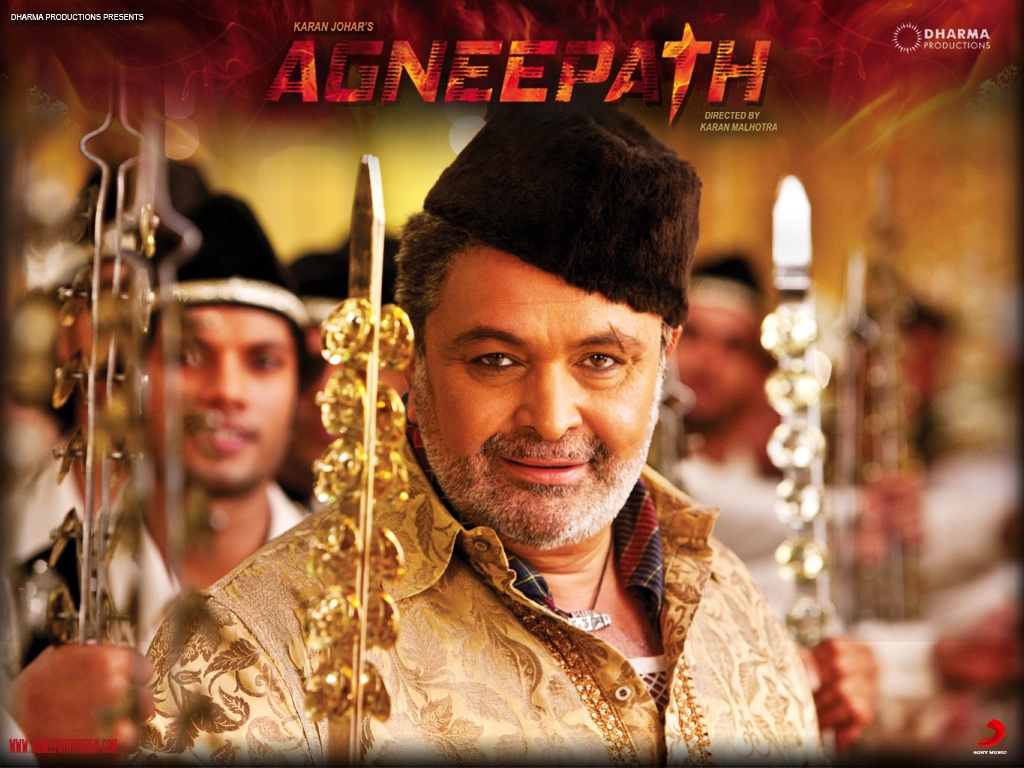 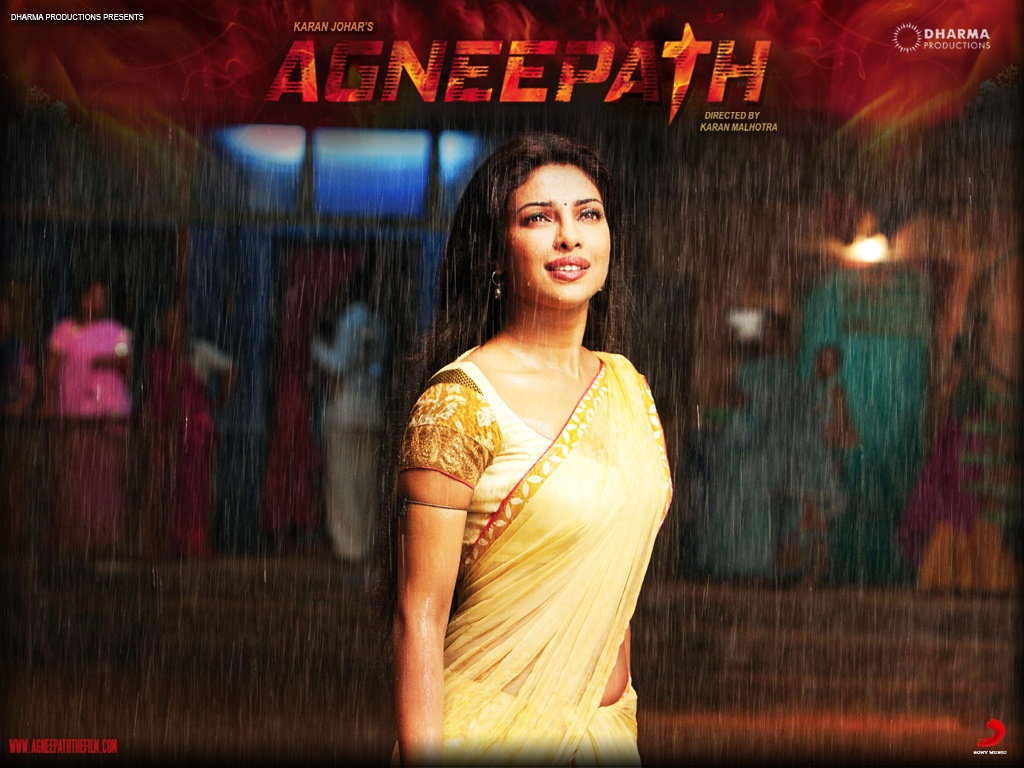