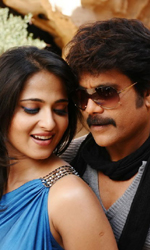 Nagarjuna, one of the superstars of the Telugu film industry, might be nearing his 50s but he doesn`t look that age. The good-looking star can still cary off roles opposite young actresses.

But one feels sad that Nagarjuna is acting in an out-and-out commercial potboilers like Ragada after having shown his brilliance as an actor in trend-setting films like Shiva, Nine Pelladutha and Geethanjali several years ago.

Two years ago, Nagarjuna said that he would be acting only in mass based entertainers and will not experiment henceforth. The result is that he is now seen in films like Kedi, which did not cut ice even with his ardent fans, and now Ragada, which is just another masala film.

Veeru Potla, who had earlier directed a hit like Bindaas with Manchu Manoj Kumar, has written a story that does not have an iota of fresh thought. The outdated script is not only a mix of rehashed sequences, but is also illogical. And there are many meaningless dialogues and songs that look like forced additions to add some commercial elements.

Ragada has many twists and turns, creating a little bit of interest in the proceedings. Coming to the film`s plus points, it is certainly Nagarjuna incredible personality that remains in your memory even after you come out of the theatre.

His dialogue delivery, which has a slight slang of the Rayalaseema area, may be liked by the audience.

Brahmanandam`s comedy sequences are good. The film`s narration is high on style but is common these days.

In Ragada, Nagarjuna plays Sathya, who migrates to Hyderabad from Kadapa. He has come to Hyderabad on a mission and beats up goons who are part of a gang war headed by two dons in the city.

He joins the gang headed by G.K., who is at loggerheads with another don, Peddanna.

Sathya then meets Sireesha, who is quite a rowdy herself. He also comes across Ashtalakshmi, who has faced some problems in her life earlier. Sathya protects Ashtalakshmi and her family.

So in the process he romances and dances with the two beauties. Sathya later declares war on Peddanna.

Nagarjuna carries off his role with ease and entertains audiences with his dance sequences with the two actresses. Anushka and Priyamani add a lot of glamour to the film.

While Brahmanandam has viewers in splits with his comic antics, Pradeeap Rawat yells and shouts a little too much. Veteran actor Kota is as usual brilliant in his role.

Ragada does not have a competent story or an imaginative script, but it certainly engages the audience with its commercial masala content.