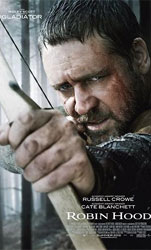 Once there was a man who challenged law in the name of true justice. The man died, but his legend that stands for justice against the oppression of the rich but unjust survives. And everyone, from crusaders of the medieval era to Maoists today have laid claim to the idea behind the name of Robin Hood.

Yet, the fuzzy history behind the legend was waiting to be written. That no one before has attempted it on screen is lamentable, that Ridley Scott does it with panache and political intrigue thrown in, an achievement.

At the turn of the 12th century, Robin is a common soldier in King Richard`s army. Upon the king`s death, fate leads him to Nottingham whose blind patron asks him to masquerade as his dead son and the husband of Lady Marion to save his estate. Having nowhere else to go, he agrees.

The new King John, meanwhile, gives free reign to Sir Godfrey who is actually working in collusion with the enemy of England - King Philip of France. Sir Godfrey unleashes a reign of terror in England. By the time John realises his mistake, it is too late as French soldiers reach England`s shore and his own lords are ready to fight their tyrant king.

Robin, meanwhile, learns of his philosopher father with `dangerous` ideas of democracy. He rallies the angry lords together and wins the battle against the French. However, King John, jealous of Robin`s popularity, goes back on his words and declares Robin an outlaw.

Robin, and his `merry men` retreat to the Nottingham forest where the true to life legend of Robin of Hood is born, but the film ends.

Despite a commendable job in most departments, expecting another "Gladiator" will disappoint you. So will the expectation of watching "Robin Hood" steal from the rich to give to the poor. This is not the story of Robin Hood the legend, but the making of it and what pushed a man to become what he became. The sequel, if there is one, could delve into what he did. Or you could watch the scores of films made on the legend.

"Robin Hood", however, comes at an apt time. In focusing on the political conspiracy that went into turning a good soldier of the realm into an outlaw, it paints a picture of politics where justice and law rarely go together. When laws are commanded by the rich and powerful to drive their selfish motives, justice is the casualty.

And throughout history, men and women like Robin Hood have taken the law in their own hands, to correct the wrongs perpetrated by an unjust regime to "rise and rise again, until lambs become lions".

Indian freedom fighters did the same. So did revolutionaries in South America, in France during the French revolution, in Russia during its revolution etc. In India, the poorest of the poor in the tribal belt, are fighting a similar battle against laws of the land that treats them with the worst inhumanities possible, either through neglect, or brutal state force. There are many Robin Hood stories there as well.

On the flipside though, audiences might find "Robin Hood" a tad too long. Enough time is spent on building characters, but not enough to have them execute their idiosyncrasies.

Yet this fifth collaboration of Ridley Scott and Russell Crowe, despite its few failings will leave you wanting for more, starting perhaps, with a sequel.

Actor Taron Egerton has promised that his "Robin Hood" movie will be "rock 'n' roll" and has vowed not to wear tights.Read More