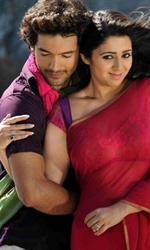 Journalist-turned-director Indrajit Lankesh`s ninth venture Dev, Son of Mudde Gowda sees him experimenting with acting. He features as an egoist star and even does a glamorous song. Indrajit`s attempts to spoof southern star Sudeep may not go well with his fans, but it works for the film.

Coming to the film, the director has certainly made a fun-filled popcorn film with a bit of message thrown in the end. He consciously avoids serious overtones. Nothing is overdone in the film, except the confrontation between a hardworking father and his wayward son.

As usual the film has less story, more style of and glitz that entertain the audiences. To answer the critics, who always blame him that his films lack a credible story line, in one of the scenes Indrajit says, If you want a story, read a novel, don`t look at the story in a film.

Indrajit has taken the basic story line from Hindi film Wake Up Sid, but does not over emphasise on this aspect in his presentation. Like all his previous films, he focuses more on the visual presentation of songs and the glamour quotient.

By opting for Charmee Kaur, known as Andhra Mirchi, and Brazilian actress of Indian origin Nathalia Kaur, he makes it clear that he targets younger crowd. The comedy sequences are part of the main story and they are enjoyable.

Mudde Gowda has made it to top of the business world through his hard work and dedication, but his son Dev has a laid back attitude. This leads to confrontation between the father and son. However, Dev`s meeting with film choreographer Kavya changes his life. His new girlfriend infuses confidence in him and tries to bring him to the senses.

Dev works as a waiter in a hotel and tries his luck in films too. When he earns his first pay cheque from a film producer, he shows it to his father and impresses him.

Diganth has given a lively performance as Dev. He looks absolutely good in Dil se song with his shirt off. His style of dialogue delivery is surely enjoyable.

Charmee has done a very good job as choreographer Kavya. Veteran actor Anant Nag once again proves that his performance in any given role will be the brightest part of a film.

The film`s cast has many comedy actors and delivered impressive performances. In fact, the comical dialogues and sequences involving Raju Thalikote, Sharan, Tabala Nani, Swayamvara Chandru and Mithra are quite entertaining.

Jessie Gift`s music is the highlight of the film. Dil se song is well picturised also.

Santhosh Kumar Pathaaje`s camera work adds up to the richness of the film. The editing work is also perfect.