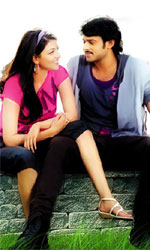 Right from his first film "Tholi Prema" which ran successfully for over 250 days, director Karunakaran has been making feel good love stories.

Karunakaran has stuck to the same formula in his new film "Darling" starring Prabhas and Kajol, but has not been able to get the right results in this film primarily because of a cliched storyline.

However, the film does have some plus points. Prabhas and Kajol have been presented well and they look good.

Though the first half of the film drags a bit the story picks up in the second half.

On the flip side, the screenplay and weak narration mar the film. The song picturization are done well, but G.V. Prakash`s music is ordinary.

Karunakaran has focused on the characterisation of the hero while other characters suffer because of patchy screenplay work.

The story revolves around Prabhas, who is adored by his father. A girl is in love with Prabhas. However, Prabhas declines her proposal and the devastated girl tries to commit suicide.

It enrages her elder brother who is an underworld don. The don kidnaps some friends of Prabhas and forces him to marry his sister. Prabhas spins an imaginary story about his childhood friend Nandini and the don takes pity on him.

Later Prabhas finds most of the incidents that he had narrated to the don coming true. He meets his childhood friend Nandini and tries to win her heart.

Prabhas charms the audience with his personality and acting in comic sequences. Kajol as usual is extremely bubbly and likeable.

Sivaji Prabhu performs the role of the hero`s father with ease and dignity. Mukesh Rishi shines in his role as the don.