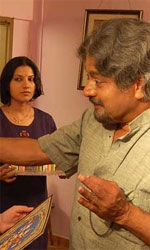 National Award winning film Vimukthi, which has released now in a few theatres in Bangalore, is certainly one of the best by director P. Sheshadri, who takes up stories revolving around contemporary social and political issues.

Vimukthi, written by Sheshadri himself, is based on a Kannada newspaper article published a couple of years ago.

It relates to the sick inmates of Mukthi Bhavan in Varanasi who are waiting for their death and their last rites are performed by volunteers there. All these inmates are either deserted by their own relatives or have come to Varanasi on their own to die in the holy temple town.

The filmmaker has narrated the story in an engaging manner unlike the narrative seen in some of his previous films. There is no confusion and all the sequences are linked perfectly. The film has been shot in Varanasi and Bangalore.

Sheshadri`s characterization is apt though the editing could have been a little sharper. The climax of the film is another highlight when the daughter searches for her own identity and decides to unite with her husband in the process of finding her father.

The music by Praveen Godkindi complements the narration. He has used background music only when necessary.

The film revolves around Keshava Rao, a well-known painter and artist who is very attached to his daughter Madhavi. But Madhavi is so possessive about her father that she doesn`t like him interacting closely with even his own female students.

A troubled childhood leads Madhavi to think about her father all the time at the cost of her personal life - she distances herself from her husband and lives as a single mother. Keshava Rao then moves away from Madhavi and then her search begins.

After nearly eight years, she finds an article in a newspaper with a Varanasi dateline that has a copy of a painting of her father. She then goes in search of her father but finds him moving away from her again. Madhavi finally is happy to know that her father is not dead and decides to make up with her estranged husband.

Vimukthi is a well enacted film with Bhavana and Ramakrishna coming out with flying colours. Veteran artistes like Venkatarao and Eknath Agarkal really shine despite the limited opportunity.

The camera work of S. Ramachandra is outstanding.

Vimukthi, which won the National Award for best regional film, is certainly one of the best parallel movies to hit screens in Karnataka in recent times.