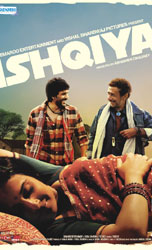 Love it, hate it but you can`t ignore `Ishqiya` (IANS Film Review)

"Ishqiya" is a very strange film. Strange, not so much in terms of content, unless you really believe there are sleepy dusty towns in north India where boys learn to use a gun before they learn to wash their own bottoms. But in terms of the way the three main characters are thrown against each other in combustions that suggest a brutal bonding between the libido and the landscape.

To cinematographer Mohana Krishna`s credit, he creates in the suburbs of Mumbai(masquerading as Gorakhpur) a kind of sweeping lazy ambience of leisurely self-indulgence.

"Ishqiya" is the kind of cinema that you can love or hate, but cannot be indifferent to. The dusty, parched, sexually and spiritually arid hinterland renders itself effectively to the characters. The uncle-nephew pair of Naseeruddin Shah and Arshad Warsi provide the kind of sweaty, grimy male bonding that we saw in Quentin Tarantino`s "Inglourious Basterds".

Vidya Balan`s Krishna is a conniving victim. And if that sounds like a contradiction in terms, it is purposefully projected into a plot that pulsates with a seedy tension and a freewheeling virile humour.

"Ishqiya" is the aesthetic version of toilet graffiti. The writing on the wall is very clear - hate these characters who live by the gun.

How the film finds a central core of gentleness in this milieu of murky machinations is another story. Or maybe it isn`t.

Debutant director Abhishek Choubey tries to create two different worlds, one of criminality and the other of compassion, within one range of vision. It`s a tall order.

Some of the sex and power play among Vidya, Arshad and Naseer`s characters are intriguing and arresting in its swift shifts of dramatic tension from one to the other.

Towards the second overture of this untried symphony of antipathy, the writer and director conspire to create a bizarre climactic spiral involving a shady business tycoon of the area whom our trio of protagonists decide to kidnap.

By the time the kidnapping plan goes horribly awry, the narrative too loses its bearings.

If the film holds you until the end it`s because of the principal performances. Naseeruddin Shah confers a rock-solid tenderness to his ageing criminal-lover`s role.

Arshad Warsi, one of the most underrated actors of our cinema, gets a rare opportunity to sink his skills into a part of a raunchy, randy rogue, out to get the neighbourhood widow to hit the sack.

But the film belongs to Vidya Balan. With a face and eyes that convey a determination to make her way through a rough patriarchal order, Vidya is tender, brittle, cunning and cool - all rolled into a bundle of bewildering emotions that unfold more through her body language than the script. She rises above the self-indulgent realism of the narrative.

A triumph for the actress. But what of the film? How do we evaluate "Ishqiya" beyond its politically-charged, verbally-lurid lunge at realism? Is the film to be applauded for forging a new language of expression? Or should that language have been used with more restrain and tact?

Frankly there are no clear and simple value judgements to be applied to "Ishqiya". It`s partly a homage to the rugged Westerns from Hollywood, and partly an attempt to penetrate the north Indian small-town hinterland where people don`t just live with violence, they even enjoy it.

Actress Vidya Balan was praised for her role in "Ishqiya", but the actress had walked out when she was narrated the script, says filmmaker Vishal Bhardwaj.Read More

Steamy visuals, colourful expletives, Gulzar`s lyrics, impressive star cast - Ishqiya promises all this and much more. Coming from Vishal Bhardwaj` stable, the film, which is releasing Friday, will give a rustic feel to the audiences just like Omkara did.

Distributed in India by Boney and Sridevi Kapoor`s film and television entertainment company BSK Network and Entertainment Pvt Ltd, it has been co-produced by Shemaroo Entertainment and Bharadwaj.

The directorial debut of Abhishek Chaubey, the movie has actors like Naseeruddin Shah, Vidya Balan and Arshad Warsi. It has already become an awaited venture courtesy its songs and promos.

The film is a blend of romance and suspense. It deals with various aspects of love, lust, complete submission and false love. It is not just about the three central characters; other characters in the film are also connected to it, Chaubey had told IANS.

I have borrowed my backdrop and settings from reality and I used them to tell the story. It`s basically about the emotional journey of these three people, he added.

The story involves two thieves - Khalujan (Naseer) and Babban (Arshad) - who are on the run from their boss. They seek refuge with an old friend and instead meet his widow Krishna. As they plan their escape, their time spent together draws the duo to her.

Khalu with his tinted vision of old-fashioned love and Babban with his lustful eye - both are attracted to her.

The threat of imminent death forces them on a path of violence and betrayal. Set in a rural landscape, Ishqiya explores basic human emotions influenced by desire, greed and revenge.

Vidya had to mouth expletives for the movie, which made her apprehensive.

I was very apprehensive while using those slangs. I have never used them in my real life but I had to because the script demanded. The movie belongs to a certain terrain where slangs are part of their lingo, Vidya had told IANS.

Abhishek Choubey had to constantly keep giving me a pep talk. Quite often I was stuck because of the language and content, she added.

With only four songs on the soundtrack, the music of the film has already become a favourite among listeners.

Because of its content, the movie has been passed without any cuts with an `A` certificate.

I never claimed the film was for children. The content is adult. So I`ve no problem with the `A` certificate, he added.

Ishqiya is releasing Jan 29, alongside Amitabh Bachchan starrer Rann and Road To Sangam.