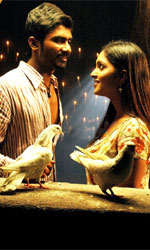 "Raavana" is a remake of director Selvaraghavan`s Tamil film "Kaadal Kondein" that became a huge hit and catapulted actor Dhanush into the top star league.

The original Tamil film, which was released five years ago, not only suited the tastes of Tamil audiences but also had some daring, dark sequences.

But Yogish Hunasuru has tried to present this film as a pure family entertainer. As a result, the thrill found in the Tamil film is absent here. "Raavana" is certainly not a patch on the original.

The sequences where the obsessive hero makes diabolic plans to get his lover were well conceived and narrated in the original. Unfortunately, the same sequences lack the impact in the Kannada film. Even the hero`s characterisation in the Tamil film was influenced by Shah Rukh Khan`s role in "Darr", but Yogish has tried to be more sympathetic to his character.

The positive aspect of "Raavana" is that it has been able to retain the same level of curiosity and interest in the tense moments seen in the climax as in the original. Yogi has come out with flying colours in the last few sequences of the film.

Even the original music compositions of Abhiman Roy stand out with songs like "Ninna Maneyolage", "Thampu Thampu Gaali" and "Chakli Nippattu" becoming hugely popular. But on the whole, "Raavana" does not create an impact.

In the film, Vinod becomes a target of ridicule in his college because of his introvert nature and negative attitude. He doesn`t dress well and wants to remain aloof, but a young girl, Divya, takes an interest in him and counsels him to be more confident.

Vinod gains confidence, but Divya`s interest and sympathy for him is mistaken for love. When Vinod comes to know that Divya is attracted towards another student, Aadi, he loses his mental balance and becomes a psychopathic schemer.

He makes Divya believe that he is helping her, but actually hatches a diabolical plot to kill Aadi and others who come in the way of his plans.

Yogish has put in efforts to show the duality of his role and he partly succeeds in his efforts. His performance in the climax is really good. Sanchitha Padukone is expressive through her eyes, but can learn a lot more in acting.

Santhosh appears more confident in his role. But some artists like Dwarakish and Sreenivasa Murthy do not fit into the roles they essay.

A lot of money seems to have been spent on some songs, which are well choreographed. Giri`s camera work is sure to impress the audiences.

"Raavana" is nowehere near its Tamil original, but it can be watched once for its thrilling moments.