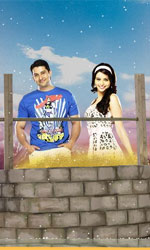 "Aao Wish Karein" is a sweet and simple film with its heart in place. For a fantasy film set in contemporary times, producer Aftab Shivdasani and director Glen Baretto concentrate on keeping the narrative simple rather than relying upon visual effects (VFX).

Loosely inspired by Tom Hanks starrer "Big" (1988), "Aao Wish Karein" is set in Simla and is about a 12 year-old-boy who wishes to grow up fast as he is tired of being considered a kid by his crush (Aamna Shariff).

Urged by his friend and philosopher (Johny Lever), he makes a wish and it comes true -- he turns into a 20 something young man (Aftab Shivdasani) the next morning.

There is no over the top act, no vulgarity or any mandatory jokes around manhood in the film. Instead, it focuses on the quest of this boy who wishes to woo his lady love.

This is where Aftab throws a pleasant surprise. While being good in comedy is a given for him, "Aao Wish Karein" gives him ample opportunity to showcase his emotional side as well.

He does well on all aspects in a role that required him to walk a thin rope. The character requires him to have the innocence and purity of a 12 year old boy even when he has turned 22. Aftab keeps his facial ex-pressions, mannerisms and body language in check.

Aamna, in her second film after "Aloo Chaat", looks very pretty and is extremely likeable. While the first hour mainly requires her to give beautiful smiles, it`s the second half where she is required to emote as well.

Watch out for the pre-climax scene where she is shocked at the marriage altar. Or the one where she realises that she is in love with Aftab.

There are heart-warming scenes like these which give a consistent feel to "Aao Wish Karein". The one where the young kid is witness to his dream getting shattered and the song that goes along with it is very well done.

Not that the film is devoid of comic moments. The ones where Aftab reveals his real identity to his friend, his encounter with a call girl, the first time when he proposes to Aamna and later when he takes her to his bedroom do bring in a smile, if not make you fall off the seat.

Any shortcomings? Well, once Aftab-Aamna love story is sealed, there isn`t much movement. The movie starts going off tangent with Aftab looking at solving his family problems. Thankfully, the movie does come back on track, hence arriving at a convincing end.

The only `wish` one makes as a viewer? If only the makers had promoted this film a little better at least, `Aao Wish Karein` would have been more visible than it is today.

12 year old Mickeya`ss life was almost like a fairy tale, a beautiful family, best buddy  `Bonnie` and his angel on earth - Mitika . But one beautiful day Mickey`s fairy tale shattered into million pieces. It was the day he realized he was an adopted child and his 23 year old angel Mitika called him a `˜Kid`. He ran aimlessly from the harsh reality. Tired and drained of all emotions he sat all by himself until Hitchcock read his sad story from the dried up patterns of his tears.

Bad things happen to good people, but my dear Mickey good things always follow. Hitchcock philosophized. Mickey was feeling so low that he wished for a Miracle. He wished to become big. That night he walked into his house feeling almost like a stranger, tired and drained he dozed off to sleep only to the wake up next morning and his whole life changed. He woke up to a Miracle but was this, a blessing or a curse?

Will Mickey become part of his beautiful family portrait?
Will he find his true love - Mitika?
Will this fairy-tale have a happy ending?

If you believe in fairy-tales, you become a part of it