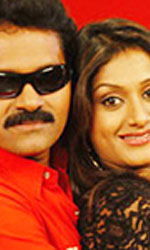 The beauty of Yaaradhu is that you go to see it with least expectations, but come back with lot of satisfaction. The film is certainly a surprise packet for the Kannada film audience.

Vinod Raj and his mother M. Leelavathi have been making films for many years, but they never offered anything interesting like this.

Their last movie Shukra was a total washout. But Yaaradhu is refreshing mainly because of its neat presentation, right mix of suspense and horror and excellent performance by M. Leelavathi.

Those who doubt Vinod Raj and Leelavathi`s sincerity will be pleasantly surprised after watching the film.

Yaaradhu has all the cliched elements seen in a horror film - from screechy sound of moving doors to scary noise made by winds to eerie silence to flying objects. But the faster pace and the nail biting climax makes it a good watch.

This is dialogue writer Srinivasa Kaushik`s directorial debut and it raises hope that budding talents like him have the potential to bring desired changes in the industry.

Leelavathi, who has played positive roles in over 600 movies, should be complimented for accepting such a role. The 70-year-old not only performed exceptionally well but overshadowed her son Vinod Raj.

Kaushik has really worked hard on screenplay, which has many tense moments.

Yaaradhu has been complemented by good technical work. The graphics have enhanced the impact of the climax sequence. Camera work and music also compliment the narrative.

The film revolves around a group of college students - Viji, Ganesh, Anand Raj, Satish and Raju who go to Bheemana Kuppe, a tourist spot near Sirsi in Uttara district, on a college trip. They stay in a guest house owned by Mary.

The fun trip turns into a nightmare when three students disappear. Viji seeks help from his influential father who puts political pressure on the authorities to find out the missing students.

Police Inspector Prathap is assigned the job. He lands up in Bheemana Kuppe and unravels the mystery of missing people.

Suman Jadugar as Viji has given a creditable performance. All other artists are good too.

Yaaradhu is a treat for those who love watching horror films.