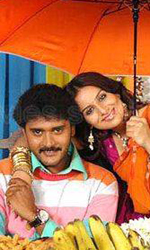 "Iniya" is a not-so-good film by promising director Mussanje Mahesh who impressed with his debut movie "Mussanje Maathu". Described as a family oriented love story, the film fails to click mainly because the script isn`t handled well. But it is salvaged by a fantastic performance by lead actor Balaji who has made a comeback after a long gap.

"Iniya" starts off well with some humorous situations, but as the film progresses it becomes slow because of some forced situations added in the story for twists. A couple of fight sequences are also added in the middle of the drama.

The director has ensured that comedy and sentimental sequences go hand in hand along with songs and fights, but nothing looks convincing on the screen because of weak script.

To be fair to Mahesh, one can say that dialogues are well received by the audience.

But is it wise to project an anti-feminist angle in a love saga? The film sends the message that a woman in love loses her right to move on in life after her lover goes to jail. Is it fair to propound such theories in this modern day?

The story revolves around Balu who belongs to a big joint family headed by a patriarch. Janaki comes as a guest to Balu`s house to attend his cousin`s wedding. She is a chatter box and always fights with Balu and eventually Balu and Janaki fall in love.

Balu gets into trouble when he saves Janaki from rowdies during his visit to the city. He is sent to jail for a year. After Balu`s imprisonment, his mother is thrown out of the house. When she tries to meet Balu in jail, she doesn`t succeed.

Finally Balu is released and is devastated to learn that Janaki is married. He decides to teach her a lesson, but his mother dies.

Balaji shows that he has great potential as an actor. He also shines in the fight sequences. But Pooja Gandhi looks atrocious without make up in the first half. She looks good in just songs. Except for Oorvashi and Sanketh Kashi, all the other veteran artists are over-dramatic.

Sreedhar`s music is good. The title song and "Muddaada Ee Naguvige" have been shot well. The background score gels with the narrative. Veteran Sundaranath Suvarna shows his competence in handling the camera.

"Iniya" is good in parts. It shines because of a very strong performance from Balaji.