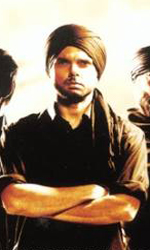 Sohail Khan is the most underrated Khan in the film industry. But Sohail knows his craft and he uses it with transparency in comic roles and in this intense melodrama called Kisaan.

Sohail had earlier done a fairly watchable take on the question of Indianness in I... Proud To Be An Indian with the same director. In Kisaan, Sohail champions the cause of rural life with a plot that nudges Manoj Kumar`s Upkar. It`s a nudge that doesn`t topple the patriotism over.

Set in Punjab, the story of a wizened father (Jackie Shroff, sufficiently wise in look and makeup) and his two sons. The elder Aman Singh (Arbaaz) goes to the city and eventually marries Priya (Dia Mirza) who`s blessedly not the urban predator-vamp. The other son is a quiet faithful Jiggar Singh (Sohail) who stays with his father ploughing not just the land but also goons who dare to cross their path.

The authentic Punjabi locales replete with lush stretches of `sarson ke khet` (mustard fields), handpumps and sugarcane juice give the film a rugged and credible climate. However, many of the peripheral characters, specially the corrupt villainous caucus, are purely caricatural. If subtlety is your big cinematic turn-on, then Kisaan may not be your cup of tea... or should that be glass of `lassi`?

Kisaan is like a tall spiced-up glass of `lassi`, without cream. It`s an unabashed celebration of old-fashioned melodrama with dollops of bone-crunching action in the last 30 minutes that leaves us wondering if Manoj Kumar ever imagined that the fight to hold on to the land could ever get so violent and bloody.

The principal characters seem to inhabit rural Punjab with comforting familiarity. The ambience is conducive to a demonstration of flamboyant emotions. The direction is often ramrod straight and literal. The film`s charm lies in its ability to be an old-fashioned cliche without getting wobbly.

However, the Punjabi songs and the hideous remix of Mahendra Kapoor`s Mere Desh ki Dharti get on the nerves. But Sanjoy Chowdhary`s background music is first-rate in its ability to replicate the characters` emotional graph.

Among the actors Sohail stands tall, quite often taller than the material given to him.