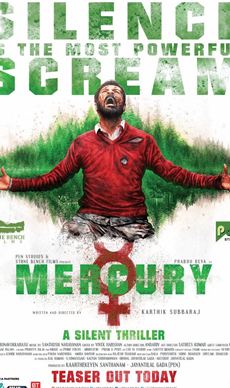 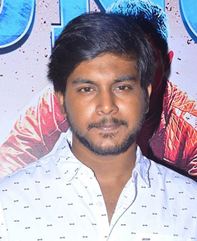 Designed to speak about the horrors of corporate exploitation, industrial wastes and accidents, director Karthik Subbaraj's latest gambit "Mercury" is a silent thriller which begins with a slate that pays homage to all the silent films right from, "Raja Harishchandra" to "Pushpak". It then claims, "Silence is the most powerful scream". Obviously, expectations rise.

Set in a rural ghost town affected by mercury poisoning due to a corporate blunder, the story revolves around five mute friends (four male and one female) who on a night out celebrating the birthday of the female friend, stumble upon a dead body, essayed by the ace dancer Prabhudheva. Horrified and despite disposing off the corpse, how the dead man haunts the five friends, forms the crux of the tale.

The performances like in all silent films are exaggerated and over-the-top. But what actually keeps you glued to your seat is the cat-and-mouse chase between the mute protagonists and the blind antagonist.

While the premise elevates the expectations, the blaring background score from the first frame itself, deflates the whole purpose of the silent aspect. What further muddles the film is the cross-breeding of the genres - social drama with horror.

Though the film has a social message, the plot, treated like a horror film is one dimensional and weak. It fluctuates with strong intensity. What starts off on an intriguing note only gets convoluted and corny as the film progresses. The entire proceedings take place over one night, but the night seems stretched beyond the usual, with fatigue setting in. Also, some of the scenes seem to be stereotyped and amateurishly mounted with a few thrilling moments that lack the fear factor.

The first half meanders aimlessly and the second half though compact and packed with action, seems ridiculous with all absurdities. But the wrinkles do get ironed out during the denouement.

The cinematography by S. Tirru keeps you engaged with all the dramatic lighting and angles. On the other hand, the background score unlike the silent films of yore, is too loud. It overkills you with the noise.

Overall, to appreciate any good piece of art, one needs to ruminate to find a meaning in its composition. Despite not breaking any barriers, "Mercury" offers a lot to ruminate about, not in an organic manner but a forced one.

Sometimes the message is not enough. Not when you have to wade through acres of lush -- in this film, quite literally -- to get to the point.

"Mercury" has a message about ecological devastation and chemical plunder. To drive in the point the director, wearing his commitment on his sleeve like a renegade revolutionary rapidly running out of tricks,flashes statistics of chemical carnage across the globe during the end-titles.

This attempt to yoke horror-thrills with a social statement left me cold. It is as unconvincing as the mighty Prabhudheva going through a role that requires no dancing.

A bit like Agra without the Taj Mahal, no?

But wait,here comes the redeeming stroke. In the elaborately-staged scenes where the blind nameless ghoul follows sound signals to track down his victims in a dilapidated ramshackle chemical factory reeking of death and plunder, Prabhudheva uses the dancer's body language as an action machine to show his characters sniffing out his prey.

The chases in the environmentally challenged setting are interestingly staged, parts of it being heart-in-the-mouth, thanks to the cinematography and artwork which aid the ambience of shivery shindigs.

Prabhudheva gives his ghoulish character a life of its own. He fills the air with anguished shrieks that sends a chill up our spine. As long as he is on the 'scream' we are game. But the rest of the film is so awfully loud messy and theatrical I cringed on behalf of the multi-talented Prabhudheva.

He deserves a lot better than this phoney salespitch at promoting cheap seat-jolting horror in the guise of a social message. The story of four young men and one young woman who are hounded by a zinced-out zombie who tracks them down with the help of sound is clearly inspired by Fede Alvarez's 2016 horror-thriller "Don't Breathe".

"Mercury" doesn't allow you to breathe either. It suffocates you with the over-elaborate background score and amateur actors who gesticulate like circus artistes in lieu of genuine sign language.

Silent film? "Mercury" is as silent as goat whose throat is being slit.

When life is at war, the most powerful scream is SILENCE! Mercury - the first-of-its-kind Silent Thriller is all set to release worldwide on Friday the 13th of April, 2018. 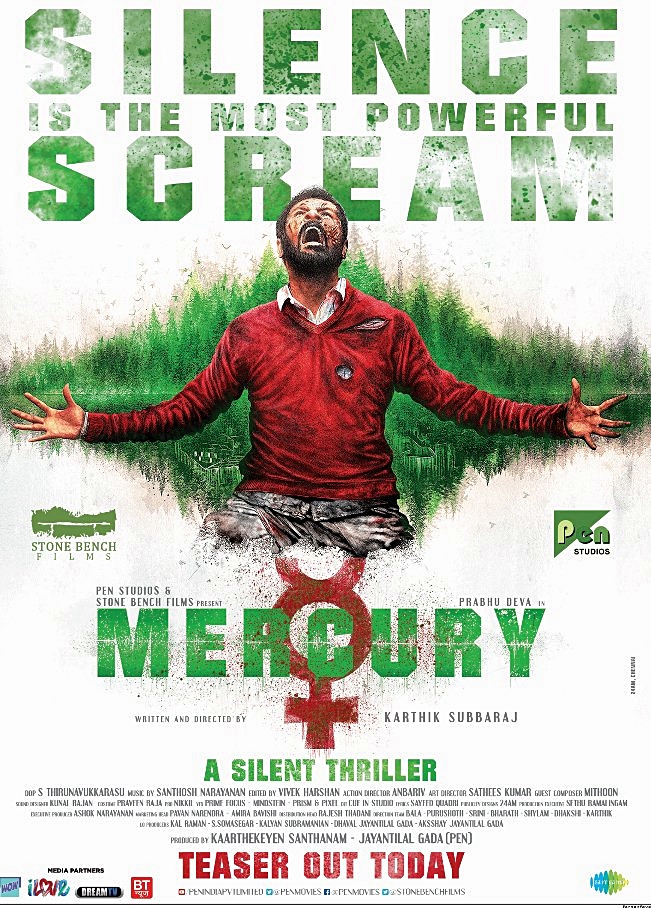