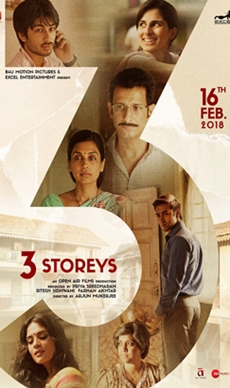 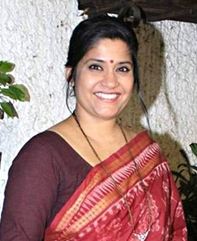 Debutant director Arjun Mukherjee's "3 Storeys", with a misleading title, is a craftily narrated tale of characters living in a three-storey chawl in Mumbai.

Set in a middle-class dwelling in the heart of Mumbai, the setting plays a significant part in portraying the social fabric and astutely intertwines the lives of the people living there.

The first act starts on an intriguing note but soon crumbles. The narrative, with its twists and turns, is on-the-nose and proceeds with reckless abandon. And the characters really need to "get it" if the story is to have its triumphant third-act liberation, which they do. Their tales are exciting, absorbing yet cliched.

Renuka Shahane, with prosthetics and gaudy make-up as the Goan, Flory Mendonca is a tad over the top. Though she performs to the best of her ability, she seems to be a misfit in her role. She plays a pampering mother who spares the rod and spoils her son Anthon.

Masumeh Makhija and Sharman Joshi pair as star-crossed lovers; Varsha Joshi a Brahmin girl and Shankar Verma the ace embroider, who land up living in the same building. Their on-screen chemistry is palpable.

Similarly, debut actors Aisha Ahmed and Ankit Rathi as Malini and Sohail make a cute pair caught in an inter-religion love story. Their romance, though underplayed, creates a ripple and you root for the two.

Among the others in significant roles are Himanshu Malik as the bachelor police officer Ganpat, who lives alone and Richa Chadha, the seductress-cum-narrator. Though wasted in miniscule parts, they have their moments of on-screen glory.

The film, mounted on a moderate scale, is technically sound. Will Humphris' camera work is good in parts. His frames capture the locales and emotions sharply, but some of his frames are shaky and the lighting a tad poor.

Clinton Cerejo's music blends well with the narrative and elevates the viewing experience.

Overall, an intelligent viewer would initially dismiss the film as a lazily penned plot with banalities and plot-holes galore, but then the writers cheekily and astutely wrap up the film... At some points, it makes you say, "Ah, I did not see that coming."

And, if you are in a good mood, you will leave the film on a positive note or else you will feel cheated for investing in the characters that were just a figment of one's imagination.

Nonetheless, climb the "3 Storeys" and find out for yourself.

At one point in this three-storeyed plot we see a kindly Muslim patriarchal shopkeeper offering verbal comfort to an abused wife. Before we get a chance to suspect his motives the storytelling moves on in search of other manifestations of suppressed pain in an environment that breeds a stagnant disingenuity in anyone who cares to partake of the life on offer in this haven of hopelessness.

That moment comes back to bite the very hand that feeds the plot, when we recognize that comforting look in the patriarchal shopkeeper's eyes as the beginning of lust. Yup, no one is what he or she initially promises to be.

3 Storeys tucks away little surprises like notes pinned on the refrigerator, to be pulled out at a later time when we least expect it. This is a film with a strangely unfinished look. Many of the chawl scenes are shot on the studio floor giving the character's resonant wretchedness a precariously stagey look.

But we really don't mind the leeway given to artifice. Even in the most contrived moments the characters have a wayA of rising above the artificiality.

There are three stories here,interwoven into a plot by a seductive wet-dream queen of a narrator, played by Richa Chadha with smoking-hot mischief. Early in the narrative I realized we can't trust Chadha to tell the truth. Just how much of the wool she pulls over our eyes is a surprise that the plot saves up for the last. By then we are beyond caring about the veracity of the goings-on. All we want is to know what happens to the characters.

Every character, big or small, is written into the plot as a vivid entity. This is not to say that they are all satisfying in their dramatic thrusts. Often the people who populate Althrea Delmas Kaushal's chawl are a chimeric deceptions. They flatter to deceive, as the brutalized wife (Masumeh Makhija trying hard, and succeeding, in fitting into the battered mould) finds her lost beloved (Sharma Josh, characteristically reliable) in the chawl next door.

It is a wildly improbable coincidence, and one that could have destroyed our precious belief in the story's power to heal. Miraculously the film tiptoes across the landmines that it suicidally lays out in the plot, like a night-time reveler walking across sleeping figures in his chawl after a night of partying.

This is a film that makes us forget it steep trespasses, and that one shocker which the narrative saves for the last when a Hindu-Muslim alliance must be called off for reasons that have nothing to do with love-jihad, is so sickeningly incriminating it makes our blood boil.

Again we don't abandon the plot for crossing limits. This is one audacious game plan to embrace lives in a chaal in a sweeping sighing clutch last seen in Mahesh Manjrekar's Pran Jaye Pal Chawl Na Jaye. Almost every character is tangible and tactile. My favourite is Renuka Shahane's Goan matriarch Mrs Mendonca.

Her coffee conversation with Pulkit Samrat is the filma's most lively talk point, brimming over with significances that both the actors savour like pieces of raisin in a fluffy plumcake. Shahane seen after a long time, portrays the Goan Catholic woman as mixture of Jennifer Kapoor's solitary spinsterhood in 36 Chowringhee Lane and Nadira's boisterous rum-swigging iconoclast in Julie. Pulkit Sanrat provides Shahane with fine cues. This is one interesting actor waiting for the Big Bang in his career.

There is tenderness and brutality, sometimes in the same frame, as director Arjun Mukherjee tightens the screw on our perceptions of how unhappy people generate their moments of joy. 3 Storeys with its languorous pace doesn't quite have the grip of other segmented films like Crash and Bombay Talkies. But it has something far more valuable than grip. It possesses the wisdom to know what goes down need not necessarily come up. Sometimes we just need to let sleeping dogs lie.

Richa Chadha on life after love

Actress Richa Chadha who starred as a chawl's resident femme fatale in "3 Storeys", was seen earlier this month with her boyfriend Ali Fazal at Oscar parties in Los Angeles.Explaining her presence by Ali's side Richa says: "I had some work in LA and Ali had to attend these pre-Oscar events, so we decided to make a mini-vacation out of it. It was a lot of fun.Read More

Actress Renuka Shahane -- gearing up for her Bollywood comeback with "3 Storeys" -- has been trying to break free of the image of "Pooja bhabhi" of "Hum Aapke Hain Koun..!" and says the changing age representation of women in Indian cinema is a progressive sign. Read More

"3 Storeys", set in a chawl, explores intertwined lives where secrets are revealed and life in this small community is not as it seems. 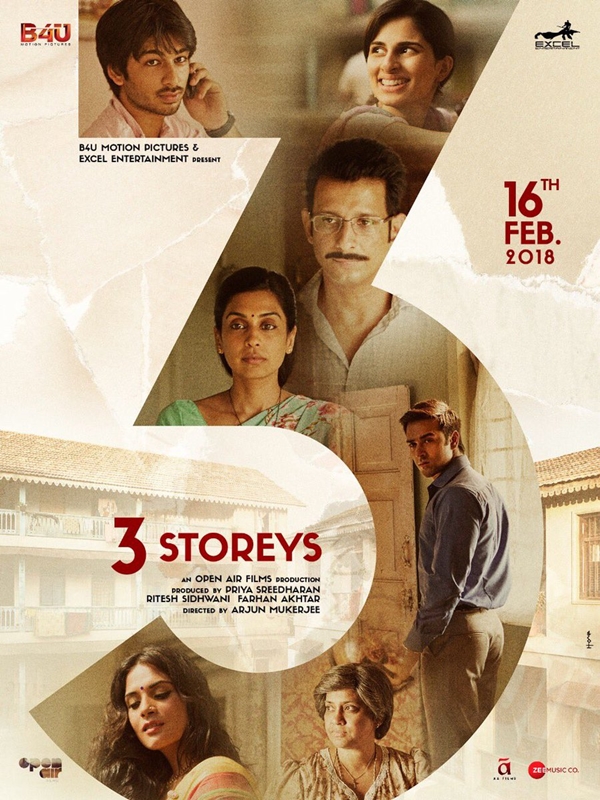