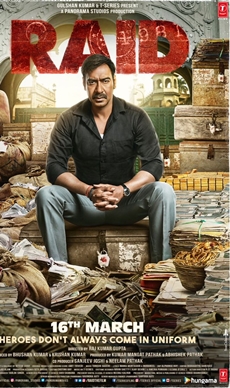 Of late, there has been a string of films inspired by true events. The latest to join the list is Director Raj Kumar Gupta's "Raid".

Designed to glorify the unsung heroes namely the Income Tax officers who work to make the Indian economy run smoothly, the film portrays one such officer Amay Patnaik (Ajay Devgn). How he relentlessly and honestly goes about his duty ensuring that the government gets its due from defaulting tax-payers, forms the crux of the tale.

The story written by Ritesh Shah is set in the early 1980s. It is a laboured, one dimensional tale which involves the incorruptible and fearless Amay who after getting tipped by a secret source, raids the premises of the well-connected business tycoon and the most powerful man in Lucknow - Rameshwar Singh aka Tauji (Saurabh Shukla).

The raid spans over a couple of days with Rameshwar trying to use all his clout to put a spanner into the proceedings.

While the message against corruption is strong, the plot pivoting around just one case, seems stretched with verbal deliberations and one-upmanship between the hero and the antagonists and overtones of romance and concern between the hero and his wife Malini (Ileana D'Cruz).

Also, the Raid, which is a battle against evil - read corruption, seems to have a diluted effect, not because mythology is dragged into the dialogues, but because Tauji was actually ignorant of how, "so much black money was stacked in his own house". This is definitely a sore point in the plot. It diminishes the aura of the antagonist and thereby plummets the film notches down the relatability grade.

While the first half of the film is engrossing, the second half turns into a comic exposure of serious events.

Ajay Devgn with his intense look and no-nonsense demeanour slips into IT officer Amay Patnaik's boots effortlessly. He displays his righteousness and sincerity with equal ease, but does nothing to elevate his performance. He is his usual self and we have seen him perform such roles in numerable films earlier. He is aptly paired with Ileana as his concerned and courageous wife. She hardly has anything to offer in terms of histrionics.

Saurabh Shukla as the chief antagonist is in top form. He delivers with all sincerity. But what elevates his performance is the support he gets from the cast who plays his extended family. Each character has their moment of on-screen glory, but the best is his octogenarian mother who is charming with her bluntness. She steals the show from all of them.

On the production front, the film is well-mounted except that in certain scenes, the lighting seems to be an issue. The frames were too dark to enjoy the visuals. While Amish Trivedi and Tanishk Bagchi's background score has the right timbre for the drama, the songs in the film are an aberration in the narrative. They break the momentum of its intensity.

Overall, with a tinge of patriotism, Raid is a film that gives an insight into how corrupt our country is.

Just when you think the Bollywood thriller is running out of steam there comes "Raid", a film so taut and clenched, so caustic and brimming with political sarcasm that you wonder where was director Raj Kumar Gupta hiding himself for so many years?

So yes he made "Ghanchakkar". We all make mistakes, okay? Not that I minded Gupta's unexpected swing into zany comedy. But smartly-spun, tautly-narrated political thrillers are his forte. "Aamir" and "No One Killed Jessica" had proved it. "Raid" proves it again.

So welcome back, Mr Gupta. Here's your deal. An honest-to-goodness income tax officer, played with incorruptible smoothness by Ajay Devgn, who gives away nothing (at least, nothing that we can see on his face) is pitched against a burly swarmy corrupt seedy politician in the hotbed of Lucknow's politics.

What happens when Amay Patnaik (Devgn) takes on Rameshwar Singh (Saurabh Shukla) on the latter's home turf? Strongly imbued in the spirit of social reform, the Idealistic Bureaucrat as revisited in this film, is a bit of an anomaly. Devgn's Amay fights that very system which has created him. Idealistic heroes tend to come across as single-minded implacable determined bullies. Devgan is all of this. It is remarkable how willingly he lets Saurabh Shukla chew up every scene in which they're together.

Editor Bodhaditya Banerjee slicesA across the large canvas of characters to capture people in their most anxious moments. It's a narrative of tremendous tension and nervous anxieties but never surrendering to a frenzied cutting-away of the material to play on the urgency of the moment.

It's done in the spirit of a pre-determined moral battle, a raider's Ramayan so to speak, that the plot so doggedly takes on in the pursuit of a Good versus Bad morality tale where the winner often appears to be a loser because he is so one-note in his determined idealism.

Saurabh Shukla has all the fun. And Devgan lets him. It is this spirit of passive resistance that the narrative so virilely assumes that makes "Raid" a riveting watch. The more Devgan's goodness shines down on the plot, the more Shukla's decadent corruption showers its reeking beneficence down on the plot that ironically gets its sustenance not from Devgan's Rama-like heroism but Shukla's Ravan-esqe rhetorics.

While Devgan and his raiders of the lost assets pool their talents to create a moribund army of wealth retrievers, the film's fuel surcharge comes from the heated exchanges between the bureaucratic hero and the political renegade. The two actors play against one other with brilliant brio.

The supporting cast is largely credible and sometimes remarkably engaging (Shukla's antiquated yet alert mother is a howl). But Ileana D'Cruz brought in for the sake of romantic glamour sticks out like a sore thumb with her patently Lakhnavi chikan-attired performance. Not her fault, though. What can she do when the plot is almost uniformly focused on its frenetic fight against wealth stealth with loads of savage humour and unexpected pauses to consider what makes corruption such a thriving industry in our country.

By the time the raid on Rajaji's ill-gotten wealth is over, the director has made a darkly humorous telling point on what it takes to call a dishonest politician dishonest.

Your job, perhaps. But hell, someone has to do the dirty job before another Jessica is killed randomly by a wealthy wayward reveler in a bar. Don't miss "Raid". One of its many pleasures is to watch the two principal actors in full control of their characters, even as the director guiding their exchanges, stands back to let the plot grow hot without burning itself out.

It takes a lot of will-power to stand back and let the corrupt steal the thunder from the incorruptible. "Raid" tells us virtuosity may be boring. But it is still a rare bird worth capturing in the palm of your hand.

Set in the 80s, raid is based on one of the most high profile raids the country has ever known and is the India's first film on income tax raids.

A fearless Income Tax officer Amay Patnaik carries out a non-stop raid at the mansion of Tauji the most powerful man in Lucknow.

Will Tauji manage to stop the raid or will the Amay Patnaik bring him down? Find out on 16th March 2018. 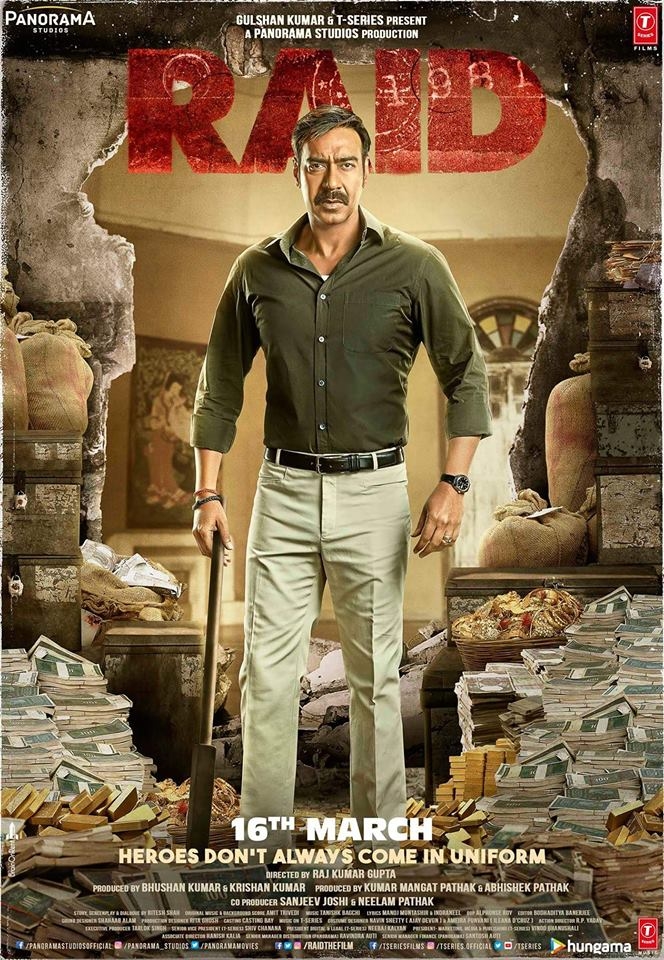 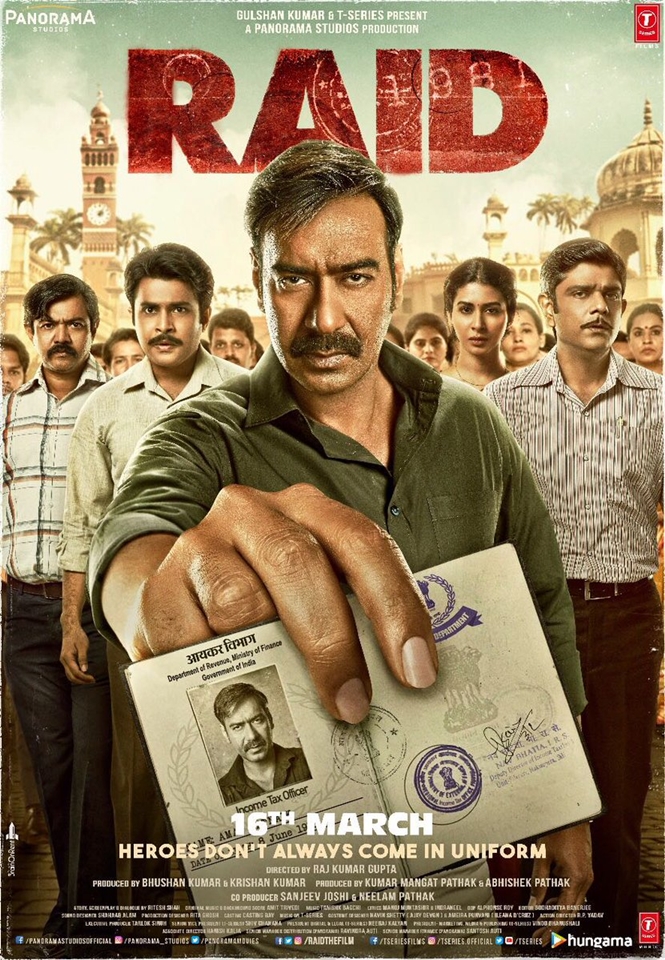 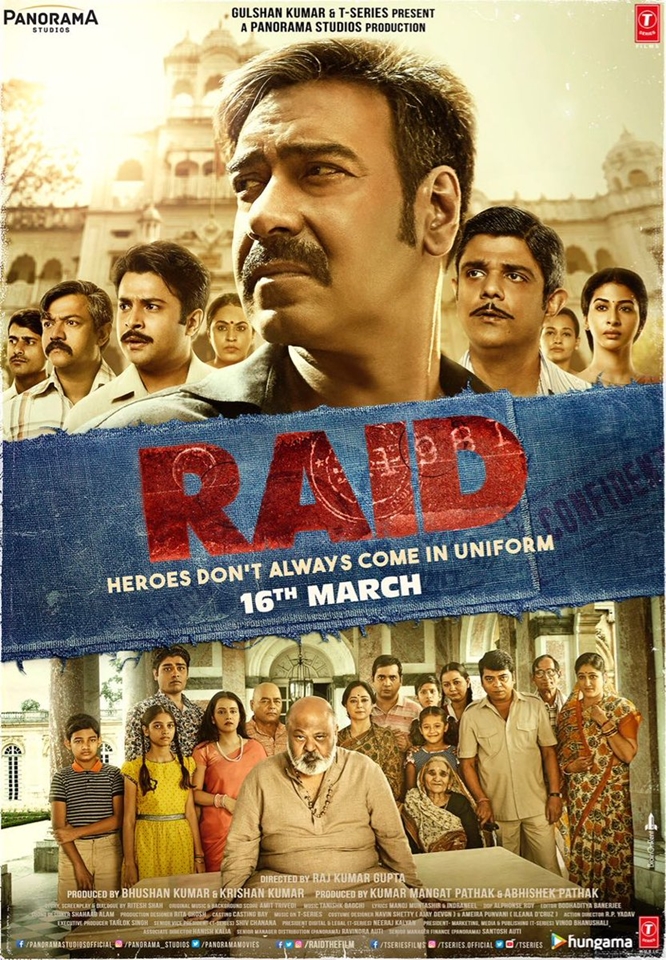 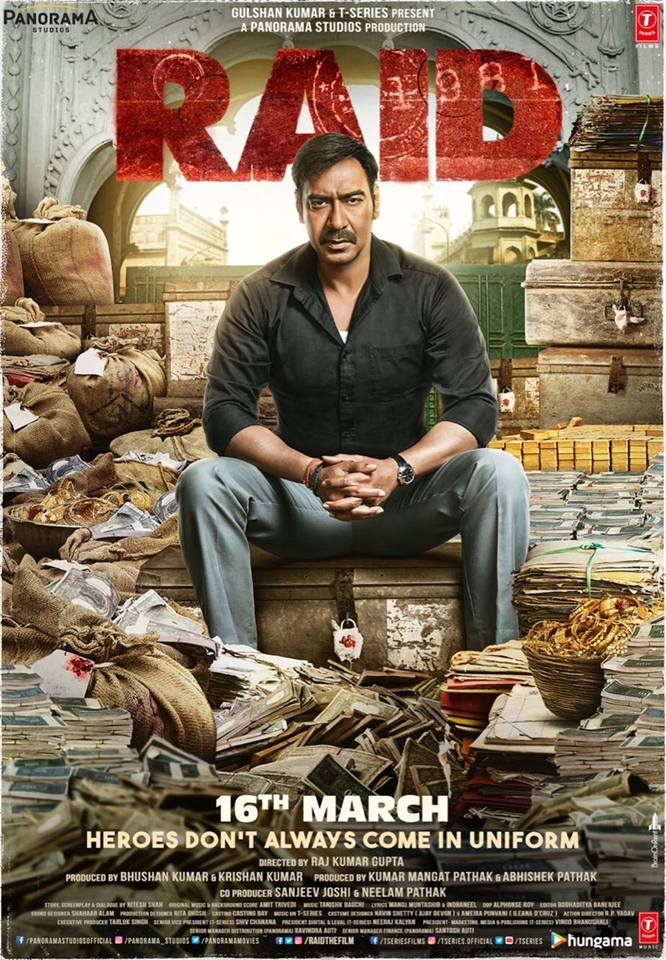