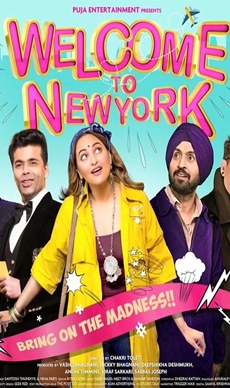 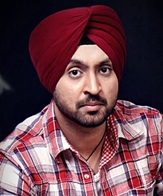 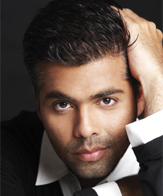 First things first. This is not a proper feature film but more of a promotional pitch for the IFFA awards. The main thrust of the narrative -- if we may call it that -- is to spotlight the awards through a fictional plot about two losers who get a chance to go on stage.

The initial sparring between Diljit Dosanjh and Sonakshi Sinha as they descend from their home town into the sophisticated bustle of NY, is steeped in an acid tongue.

Writer Dhiraj Rattan and director Chakri Toleti have a thankless job of weaving a story around the staged event. And to that extent they do a competent job of threading the off-stage manoeuvrings at New York into the antics of the wannabe star from Punjab and the dress designer from Gujarat.

Diljit Dosanjh plays his Punjabi-bumpkin card with a infectious gusto. He is the life and breath of the proceedings injecting every scene, no matter how mundanely written with an effusive warmth. Dosanjh reveals a rare ability to laugh at himself. It comes in handy in a film that is really short of intellectual discourse and high on thoughtless laughs.

"Welcome To New York" revels in corny contrivances. Lara Dutta looking smoking-hit in her colourful businesses dresses, plays the villain with relish. Her scenes with Boman Irani who plays the IFFA organiser, could have been more elaborately written. We get a sense of their hostility only through the two actors' propensity to transcend the trail of trivia that follows the protagonists to the last.

It's Karan Johar's double act as Karan and Arjun which brings the house down. As Karan, he plays himself. Camp and fashion conscious sneering at everyone around for their lack of familiarity with high-end snobbery. The other part of a vengeful mobster is played with a tongue-in-cheek solemnity that dares us to laugh .

By the time the thin plot closes in on its ersatz climax the narrative is a messy game of mistaken identities, with the two Karan Johar huffing and puffing , bringing the house down. If the truth be told, a lot of the writing here is purely puerile, meant to prop up the comings and goings of stars at the IIFA. The stars glide across the film's skyline with the intention of providing star value .

Some of the cameos, like the one featuring Aditya Roy Kapoor, are cute. Others, like Salman Khan's half-baked interpolatory hurrah, just seems to be thrust into the glamour-driven event-oriented plot for the sake of conmpensating for the absence of true inspiration.

This film is fun as long as Dosanjh and Johar get to innovate and explore the 'dork' side of comedy about two losers who come together to prove that 2 can do it better than 1.

I wish the screenplay was better written. And that the narrative didn't try so hard to convince us that the film has not been made to justify the presence of the entire Bollywood fraternity under one roof.

Director Chakri Toleti's "Welcome to New York" is not merely a bad, popcorn entertainer, but a waste of an opportunity. An agonising experience in every category one can think of.

Touted as India's first comedy in 3D, this makes this film the dimmest, one has seen in years. The comedy here is not humour, but absurdity.

The narrative takes us directly into the planning stages of the International Indian Film Academy (IIFA) awards.

The awards are to be held in New York, and in order to lure sponsors and to promote the awards, the marketing strategist, Sophie (Lara Dutta) hits upon the idea of a talent hunt contest where the winners would be invited to New York to display their skill and get their moment of fame at the awards.

The sponsors lap up the idea. Sophie, who has been working hard over the years for the event management company tries negotiating a raise for herself. But her shrewd boss Garry (Boman Irani) refuses to budge. So Sophie hatches a plan to ruin him. And she thinks she would achieve this my messing up the big event.

So instead of inviting the actual winners for the big day in New York, she invites two losers instead. The duo are Tajinder Singh (Diljit Dosanjh) aka Teji from Punjab -- a recovery agent who aspires to become an actor -- and Jinal Patel (Sonakshi Sinha) a dress designer from Gujarat. How they snatch their moment of glory on the stage forms the crux of the tale.

From the unintelligent and unengaging plot to the poorly written characters to flat dialogues, to clumsy screenplay with major plot-holes, the writing definitely is trashy, tacky and unimpressive.

The gags that revolve around the awards are not funny in the least. They seem to be hackneyed and not remotely comic.

Though packed with ace stars playing themselves, the performance of every actor is perfunctory, satirical, dull and uninspiring.

Lara Dutta and Boman Irani seem burnt out. Diljit Dosanjh and Sonakshi Sinha, though good actors, appear juvenile in most of their scenes. With Diljit addressing Sonakshi as "Darji Madam", their on-screen chemistry appears forced.

Karan Johar in a double role as Karan and Arjun, is impressive in certain scenes, but on the whole, he delivers his part in his inimitable style and hams most of the time.

Riteish Deskmukh offers nothing exceptional. Stereocast, his histrionics now seem jaded. He along with Karan, does manage to juggle a few laughs by playing off the rules of comedy which seemed forced most of the time.

The 3D effects are unwarranted. As for the special graphic effects, the visual element that stands out is the scene which is designed like a stylized, comic book narrative, giving us a brief insight into Arjun's (Karan Johar) backstory.

The film has decent production values and actual IIFA Awards shots are seamlessly meshed into the narrative.

The background score is loud and ear-deafening. Overall, the film is aimless and joyless.

Director Chakri Toleti, who has helmed the forthcoming film "Welcome To New York", says the makers are yet to decide whether to accept the suggestion of singer-turned-Union minister Babul Supriyo's demand to remove Pakistani singer Rahat Fateh Ali Khan's voice from the film's song "Ishtehaar" or keep it.Read More

Actor Diljit Dosanjh, who will be seen with filmmaker Karan Johar, Sonakshi Sinha, Boman Irani and Riteish Deshmukh, among many others, in "Welcome To New York", says he never felt he would be overshadowed.

Being a part of an ensemble cast movie can make some artistes insecure.

Asked if he felt overshadowed working in "Welcome To New York", Diljit told IANS over phone from Mumbai: "No. When you are working with big stars, the new artiste feels really safe... I didn't feel overshadowed. I am new in the industry. How can someone overshadow me?

Welcome To New York’ is a heartfelt, rib-tickling comedy that tells the story of two unlikely youngsters living in India in search of a better life for themselves. An unexpected trip to New York City sets them off on a comedic adventure that changes their lives forever. 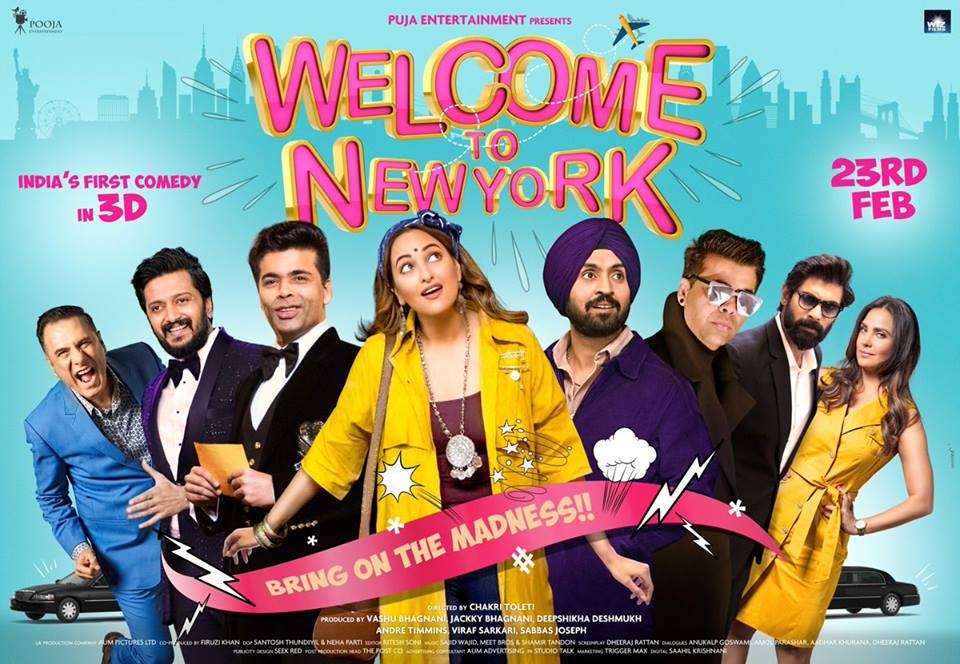