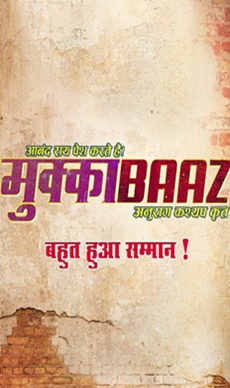 Really, we couldn't hope for a better start to our movie-going spree in 2018. Mukkabaaz is many things at the same time. To begin with it isano, it not just an ode to pugilism. It is an ode to that thing called love.

Mukkabaaz is Anurag Kashyap's most romantic film to date. It's about, believe it or not, love at first sight when Bareilly's self-proclaimed Mike Tyson, aka Shravan Singh (Vineet Singh, startling in his transformation into a ferocious fighter) happens to see Sunaina (newcomer Zoya Hussain, expressive in her silences).

The sequence where Shravan falls in love brilliantly yokes violence and tenderness, and sets the pace for what is to follow. This is a film steeped in the ethos of ethnicity, immersed in the culture of caste and gender prejudices.

But it's not as bereft of hope and humour as one would think Kashyap's milieu of mofussil mayhem would be. This is a mellower more sensitive world, a world of love and compassion in a universe of corruption and debauchery.

The smalltown setting is chilling in its bold undertones of violence. Kashyap's Bareilly (as we come to know the setting to be) is run by a glorified goon Bhagwan Das Mishra (Jimmy Sheirgill) a sadistic patron-saint, who early in the narrative asks the local Tyson to drink his urine from a bottle, "like holy water".

We never know whether Shravan actually performs the offensive act of subservience. The film's anxious editors (Arati Bajaj, Ankit Bidyadhar) cut away from the sordid sequence of subjugation.

But knowing Shravan we can easily conclude he would never eat shit, or drink pee. This is a boy-man on a mission to prove to the world and his disapproving father, that boxing is not a soft option but a hard career decision.

In the film's most powerfully acted episode Shravan hits back hard at his father's contemptuous reading of his son's ambitions, taunting the older man for achieving so little in life. It's a scene of abject filial cruelty performed with such guilt and hurt by Vineet Kumar, that a potentially stereotypical father-son confrontation scene acquires a towering personality denoting the entire gamut of conflicts that go into the aspirations of one generation as they are passed on to another.

Son says, father has no respect for his passion. Father thins son is talking about 'fashion'. It's a silly confusion, that hides the larger growing tensions simmering in small towns where youngsters want to make something of their lives. But what????

Linguistic confusion plays a major part in driving the plot forward. The actor Shree Dhar Dubey who plays the hero's buddy insists on using smatterings of angrezi in his conversations. A conceit that infuriates our Shravan.

Elsewhere cow vigilantes are busy, for no particular reason, thrashing a suspect while someone films the brutality on a phone. In the smalltown fables of Kashyap and his ilk of directors mofussil directors, video recordings on phone are indicative of how roughly hewn technology is into every day life.

Our hero roughs up his casteist senior at his workplace. When the man wets himself in fear Shravan gleefully films the man's humiliation. It's not just villains who expose their dirty subconscious.

The dialogues and situations are pronouncedly scatological, as they are wont to be in a Kashyap film. But the tone changes oh-so-delicately when Shravan is around the love of his life. Balancing between bouts of boxing brutality and episodes of unfettered tenderness Mukkabaaz is Anurag Kashyap's most vividly written and fluidly executed film since the underrated Dev D.

The performances are so powerful you fear they would outdistance the director's mastery over the patois of mayhem, and none more powerful than Vineet Kumar in a career-making role and performance that compares favourably with Robert de Niro's boxer's shots in Martin Scorcese's Raging Bull.

Not that Kashyap is Scorcese. Heavens, no! Kashyap is on a trip of his own, tripping cheekily over the live wires that are thrown all over the bleak brutal and wounded landscape of his films. And it's not just Vineet Kumar who comes forward with a performance that defines the director's quenchless thirst for searching out the violence that underlines life lived on the fringes. Ravi Kissan and Jimmy Sheirgill are rqually superb in their roles as the coach and the ganglord. These are actors who know the culture of caste and gender politics. They feel the throbbing veins of violence.

As the narrative progresses it acquires the personality of a tightly-wound entity coiling and recoiling into shapes of tenderness and venom. Mukkabaaz is a different more balanced and less unsettled beast than any film Kashyap has made. While all his recent films portrayed the dark ugly sinister underbelly of mofussil existence this time, just this once, the Director has allowed himself to explore the tricky relationship between love and violence with gentle care.

This is the Director's most sensitive film to date. It hits a hard punch. And not just in the boxing ring.

Italian actress roped in for Nawazuddin's next flick

Bollywood star Nawazuddin Siddiqui is all set to star opposite Italian actress Valentina Corti in Tannishtha Chatterjee's directorial debut. The 'Manjhi' star had everyone wondering after posting a picture with the Italian star on social media. He also added an intriguing caption to the image, "Ye ladki mere Rome Rome me hai."Read More

In the city of Bareilly (UP), aspiring boxer Shravan (Vineeth) slogs day and night to achieve his dream of being a recognised boxer. Things go awry when he falls in love with a high caste, mute girl who happens to be the niece of his arch nemesis, the head of the state boxing federation, Bhagwandas Mishra.