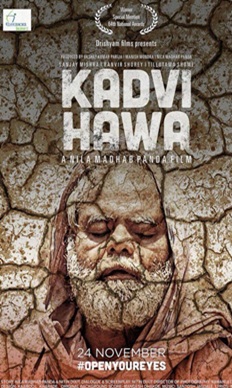 Look at what we've done to Mother Earth. She is no longer Mother, she is Muddle Earth heading towards Murder Earth. In director Nila Madhab Panda's new work aptly entitled "Kadwi Hawa", the bitter truth of ecological plunder, is wrapped in a parable about a blind restless patriarch played by Sanjay Mishra who wanders the merciless hinterland of Mahua.

Mahua and its parched dry energy-sapping water-less landscape could be in any part of the world where the water-level has fallen to almost zero, so much so that at school a little boy says there are only two seasons in his village -- hot and cold.

Panda's cameraperson Ramanuj Dutta captures the dry wasteland of a civilisation on the brink of extinction. There is a feeling of parched dread in the way the landscape is captured. And the skilfully selfeffacing Sanjay Mishra blends into the arid milieu as though born into it.

Mishra's performance, as well as the milieu captured on camera, strike not a single false note.

The same level of commitment is evident in Ranvir Shorey's performance. He is a loan collector, the laconic family man from Orissa who is given the dirty job of recouping loan money from impoverished farmers.

The bond that grows between Mishra and Shorey is based on inequality. They both are seen as victims in a society that shames its lowest denominator only because they've nothing to lose.

Shorey playing Gunu Babu brings bouts of good natured smiles to a milieu that ekes out its existence from the innards of misery.

But the film and its moistureless milieu is owned by Mishra. Watch him caress the parched ground in a gesture of unmitigated grief towards the end of the film.

"Kadvi Hawa" is a timely relevant warning for mankind to stop being unkind to Earth.

Mishra in his skimpy dhoti epitomizes the grievous isolation of an individual who is way too proud to take help, financial or otherwise, from any institution or individual.

Standing stooped in his pride, Mishra proves himself quite the calendar boy for abject poverty. This film must not be missed by any global citizen.

If you insist on watching "Justice League" this week you mustn't regret having missed out one of the most thought-provoking and exhausting and yet finally exceedingly rewarding film.

Based on true stories, "Kadvi Hawa" is the bitter pill that reminds you about the dark winds of change.

Global warming and climate change are real and are caused by human activity. Despite not showing any such activity that is destroying the civilization, the film makes a heartfelt point in a straightforward way.

It speaks about the state of the environment, the destruction of our civilization, the plight of the farmers and of the people living in coastal areas.

The narrative begins with close-up shots alternating between a pair of weary feet trudging a beaten path and a head shot moving with a staff till the old man comes preciously close to a cliff in the barren ravines of Mahua in Bundelkand.

The man is blind and this dramatic start sets the ball rolling to the personal story of Hedu, the father of Mukund, a debt-ridden farmer.

Hedu lives with his son Mukund and his family comprising of his wife and two daughters - Kuhu and Pihu. They live a hand-to-mouth existence. His companion is Anapurna - the Buffalo who he tends during the day.

Hedu lives in constant fear that his son Mukund might commit suicide because of his inability to pay back his loan.

As a concerned father he also heads to a micro-finance bank in a nearest town to check the amount his son, Mukund owes the bank.

When he realises that the debt has doubled due to accumulating interest, he is flabbergasted and frightened as he is aware that his son has no means to repay back the loan.

In his endeavour to clear Mukund's debt and unbeknownst to him, Hedu befriends Gunu Babu, the loan recovery officer, who hails from Odisha.

Gunu is also referred to as Yamdut, the God of death, as there have been cases of farmers committing suicide after being pursued by him.

Hedu guides Gunu in recovering the loans from other debt-ridden farmers. But soon realisation dawns on him, when Mukund goes missing.

Guilt-ridden Hedu then laments, that the winds of change have already engulfed them.

The plot unfolds in a simply witty and satirical manner especially when Hedu interacts with his curious granddaughter Kuhu. This is simply evident in practically every scene with her.

Watching them interact is really amusing, especially when he attributes his source of information to the wind. And when the little girl reports to him that a classmate, contrary to the text books, says that there are only two seasons -- he responds, "There used to be four seasons, but not now. It feels like the winds have an illness."

That's when you realise the plot is stirring towards matters regarding climate change. And with Gunu's predicament, the director deftly ropes in the Odisha cyclone issue.

Sanjay Mishra is the Sun around which the talented supporting cast orbit. He shines brilliantly, with his down-to-earth, natural performance. You experience his anxiety and pain as Hedu. He is aptly supported by: Ranvir Shorey as the frustrated Gunu, Bhupesh Singh as his reticent son, Mukund, Tillotama Shome as his concerned daughter-in-law and Ekta Sawant as his chirpy granddaughter Kuhu. They all add a distinct flavour to their characters.

The background score by Santosh Jagdale is inspiring and hits the right notes. The only song "Main Banjar" which comes in far end of the narrative suitably conveys the essence of the film.

Cinematography by Ramanuj Dutta captures the terrain and the finer nuances of every actor with detailed accuracy.

Overall, sans any entertainment, this slice-of-life film gives us so little to focus on that it wins by default.

'Kadvi Hawa' to be screened at Beijing film gala

National Award-winning filmmaker Nila Madhab Panda is looking forward to the Chinese premier of his drama film "Kadvi Hawa" at the Beijing International Film Festival (BJIFF)."Looking forward to the Chinese Premier of 'Kadvi Hawa' at BJIFF, honoured to Be shortlisted among the top 15 films competing for the 'Tiantan Award' from 659 entries from 71 countries, Congrats all Sanjay Mishra, Ranvir Shorey, Tillotama Shome and Manish Mundra," Panda tweeted on Sunday.Read More

"Kadvi Hawa" director Nila Madhab Panda hopes a positive word of mouth brings in more footfalls in theatres to watch the movie, which makes a point about climate change.Read More

Climate change is here and we cannot turn a blind eye to it anymore. Kadvi Hawa is a story about how climate change affects us all. 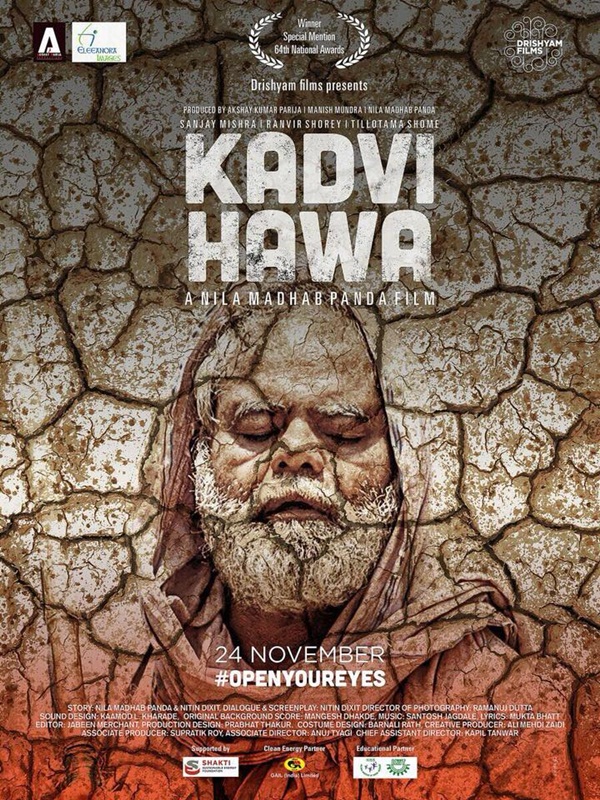