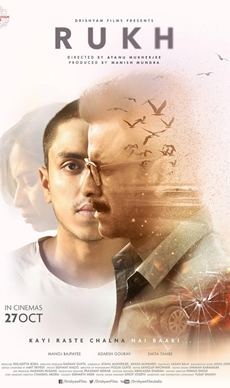 Rukh, which means direction, has been astutely used as a metaphor in debutant director Atanu Mukherjee's film.

But, on the face of it, the film is about a son's quest to know the truth about his father's death. It is his internal journey.

Three years after being rusticated from his school for ruthlessly injuring his classmate, Dhruv Mathur finds himself at a loose end when he hears of his father's accident and subsequent death. Not that he has a strong bond with his father, but then how the death and accident is hushed up by everyone, including his mother is what makes him and the audience curious.

Following his own instincts, Dhruv tries to investigate his father Diwakar's accident and in the process, he comes across some home truths; that his father was "a good man, a man of his word," and that he was under pressure for want of funds because his best friend and business partner Robin (Kumud Mishra) had betrayed him.

Now that Robin is trying to frame his dead father in a money laundering scam, makes him assume that his father's accident was staged and that he was actually murdered. With this preconceived notion, he sets out on a journey of redemption and self-reconciliation.

Set in a melancholic tone, "Rukh" excels as a fine example of a neo-realism film. It subtly captures the time and the current political scenario with flourish. But the screenplay by Akash Mohimen and Atanu Mukherjee, falls short in its endeavour as it pursues to convert the drama into a mystery thriller. The wrinkles in the mystery quotient seem forced and is probably what sets in the irritant factor.

But what makes the film fulfilling are the performances. Manoj Bajpayee is too passive a character to leave much of an impression. But he leaves his mark in a scene opposite Kumud Mishra, who plays Robin, where both of them accuse each other of extracting their pound of flesh.

Kumud is a charismatic actor, but as the slimy Robin, he is deadpan, yet effective. Smita Tambe as Nandini, Dhruv's mother, is realistic and relatable.

Adarsh Gourav is a compelling actor. He portrays Dhruv's anguish and anger with flourish, while being obsessed with unearthing the mystery shrouding his father's death. Those are the only two emotions the script allows him to display. His backstory seems forced, just inserted in a formulaic fashion to build his character.

The others in the supporting cast like Jayant - Diwakar's accountant, Hassan and Shinde - Diwakar's labourers and Amit - Dhruv's friend, have their moments of on screen glory. Each one of them is natural and they standout for their soulful delivery.

On the technical front, the production design is simply realistic and awe-inspiring. Pooja Gupte's camera work seems to be non-intrusive making the entire viewing experience natural.

The two songs, "Hai Baaki" and "Khidki", along with the background score by Anjo John, merge well with the narrative elevating the viewing experience.

Overall, despite a few blemishes, "Rukh" is a film that keeps you riveted.

It is very difficult, if not altogether impossible, to get to the core of the suffering so resolutely trapped in the hearts of the characters in "Rukh". No one, least of all the 18-year-old protagonist, is willing to reveal more of their emotions than they feel like. You won't find Dhruv shedding too many tears over his father's sudden death.

There is too much to be done, too many unanswered questions to be addressed, before the day is over. Don't hang around if Dhruv's undramatic trust with grief leaves you impatient. Unlike "Masaan" (from the same producers as "Rukh"), "Rukh" doesn't wallow in its grief-stricken predicament.

Ironically, for a film steeped in and impressed by its own ability to stay secure in its silences, "Rukh" is remarkably active at its core. We don't see much of that activity on the surface where the people in "Rukh" see themselves as neither victims nor aggressors.

A feeling of imminent danger hovers over the narrative. There are characters plotting the downfall of others, and their own. The characters have dark secrets that they don't want revealed. But nothing really happens. Not while we watch. In rapt attention, I might add.

This is a film that magnetizes our attention, not through its action but by its absence. This partiality for inaction, the deprivation of live energy as though everything that has to happen has already happened or will happen while we are not watching, is a refreshing departure from what cinema has come to mean in present times.

As Dhruv sets out to unfold the truth behind his father's death, the narrative suffers no anxiety pangs. There are no concerted attempts to hold our attention. The pace of storytelling often slackens, bringing in characters who don't always add up the way they are meant to in cinema about real situations,heaving and groaning to a near-halt as the rites of serendipity envelope the characters in a shroud of doubt and unexpressed fear.

Dhruv's journey is never saddled with aggravated poignancy. There is a basic bereavement in the theme which the debutant director and his co-writers (Akash Mohimen, Vasan Bala) don't touch. Atanu Mukherjee enjoys the slackening of tension as the protagonist pieces together the broken fragments of his father's life. The editor (Sanglap Bhowmick) takes his time seeking the quintessence of hurt and healing.

There is a frustrating scarcity of shared time between father Manoj Bajpai and son Adarsh Gourav. We always HEAR of their affinity, their differences and their mutual tension, never experience it first-hand. Suffice it to feel, the two actors bring a wealth of empathy between them, in spite of little shared screen space. Bajpai as the crashed-out patriarch conveys the burden of a man felled by his humanism. And Smita Tambe playing a grieving widow and a tight-lipped mother is well, grieving and tight-lipped.

Kumud Mishra as Bajpai's business partner shows how much history a competent actor brings to bear on his character even when his part is sketchily-written. His colleagues at his workplace are played by equally competent actors.

This is an endemic problem in "Rukh". It is so deeply inured in enigma that it leaves the characters emotions largely unexpressed. Unshed tears are fine. But sometimes you just need them to moisten the spirit of sorrow that envelopes the narrative. And goodness, why is everyone so sullen in the film? Young Adarsh Gourav doesn't get to smile even once, working his way around his character's insecurities offering us a peep into Dhruv's soul even when he is bogged down by his inability to connect with the outside world.

Though "Rukh" is finally felled by its characters' frustrations, it is a brave effort to dispel with the belief that all cinema about sudden deaths must be loud and dramatic. "Rukh" takes the opposite route, happily allowing us to strain to hear the sound of the young protagonist's broken heart.

Composer Amit Trivedi, whose new track "Hai baaki" for the film "Rukh", is dedicated to the father-son bond, says he was thinking about his relationship with his father while composing the track.Read More 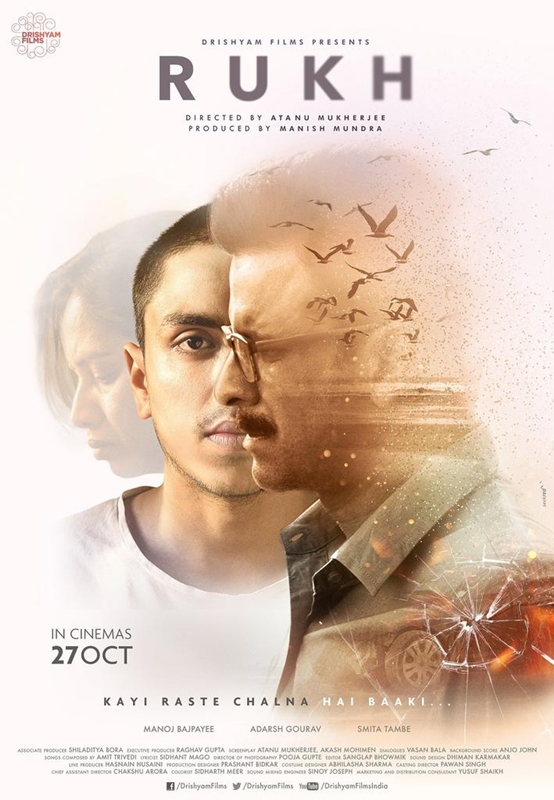