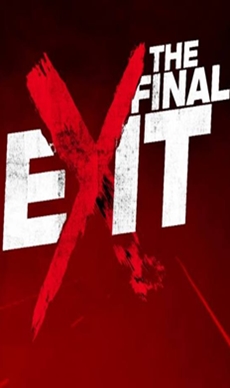 You'd either love "The Final Exit" or hate it, but you can't definitely ignore it. This film, directed by Dhwanil Mehta, designed as a mystical, road film with horror tropes, is rather quirky as it edges on being abstract and philosophical.

On the face of it, the film is absurd. The absurdity lies in its narrative. There are layers that unfurl that do not make sense either to the protagonist or to the audience.

Nevertheless, it speaks of souls caught "in between" after death. Also, in between these layers is hidden a romance story that is devoid of a soul and a lesson that spells, "desire can kill".

Often quoting, "the lines between dreams and reality are blurred", the narrative reveals how Vidyut Sehgal, a fashion photographer is haunted by his dreams.

Unsure if it is his recreational drugs that are playing tricks with him or is it reality, he is forced to visit a doctor who while giving him some medication tells him to abstain from drugs.

Though this film is based on absurdities, you simply invest in the character wanting to know how he will complete his journey, or where will his journey lead him to, especially when he is often warned by these supernatural entities; "If you don't reach your destiny before the eclipse is over, you too will die. Also, don't get out of your car, or you will be killed."

While the premise of this film seems simple and the tale easy to read, the director's treatment of the film is very non-figurative sans drama. The absurdity with a tinge of horror tropes would either leave an impact on you or throw you off guard, either ways the narrative is tedious for viewing.

Apart from this, what keeps you glued to the screen are the production design and cinematography.

The tone of cinematographer Ajay Pandey's frames is dark with all shades of grey and sepia. His wide angle lenses capture the landscapes - the wilderness, the lofty mountains and the vast expanse in all its glory. He also captures the interiors astutely. Each frame is picturesque as well as haunting.

The interiors of Vidyut's house and the hotel he puts up at lends a spooky aura. Also the dagger, the camera and the red stilettoes add to the mysterious narrative.

While the film belongs to Kunal Roy Kapur, there is nothing much to speak about his histrionics here. He is stoic with a stoned, dead pan look. He is aptly supported by a bevy of pretty young girls who are perfunctory in their approach.

Overall, if you are an enthusiast of experimental films, this one will surely not disappoint.

Is death horrifying or is it beautiful?
Is sex an act of sin or an act of salvation?
What if life is merely a dream and death an alarm clock to wake up?
Find answers to these questions in this Supernatural Thriller!