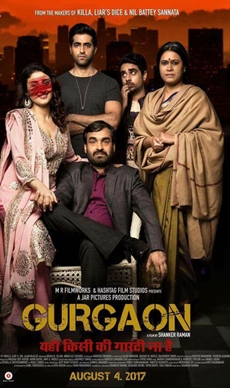 Gurgaon': Dark but not compelling enough (Review By Troy Ribeiro, **1/2

The film opens with a promising, serious sequence that preaches how nature is violated by man and warns us about its repercussions. But the story that follows is too feeble to substantiate this initial claim.

Mounted as a noir thriller and embedded with artificial flourish, Shanker Raman's maiden directorial venture "Gurgaon" is a moody, heinous family drama based on true incidents.

With female infanticide, greed and sibling jealousy as vile motives, the story reveals the psychotic behaviour of an estate developer's clan who is based in one of the most economically developing regions of northern India - Gurgaon.

Property magnet Kehri Singh (Pankaj Tripathi) has an ominous past. In his endeavour to be prosperous, he visits a soothsayer, who tells him that his daughter will bring him all the luck he needs. So he adopts an orphan, Preet (Ragini Khanna) and showers all his attention on her. This has an adverse effect on his biological son Nikki (Akshay Oberoi), who resorts to vices and substance abuse.

To prove himself worthy, Nikki proposes various business projects, the latest being a gym in an upcoming locality. When his proposals fail to impress his father and he realises that Kehri plans to hand over the development project of the land to his sister, who has just returned home from the US after studying architecture, he resorts to illegal methods of raising money for his pet project.

But luck evades him and he lands up owing a bookie Rs 1 crore. Desperate to ease his financial woes and raise funds to pay back the bookie and for his dream project, he hits upon a plan to kidnap his sister Preet, fully aware that his father will cough-up the ransom amount.

But predictably, his plan goes awry and the chain of events only get murkier.

The plot, with cardboard thin, one-dimensional characters and a sub-standard screenplay the narrative seems forced to ensure mystery and drama. But, the real fascination in the film lies in the subtle, under-stated performances of its cast who speak in a fluent Haryanvi accent.

Akshay Oberoi plays the handsome yet deprived bad boy, Nikki with natural ease. It is his cold gaze and his coterie of friends that add to his aura.

With her tomboyish demeanour, Ragini Khanna packs quite a punch as Preet.

Pankaj Tripathy as the ever-sozzled Kehri Singh with passive, impenetrable expression is perfunctorily disturbing but not menacing. He is aptly supported by Shalini Vatsa as his wife Karma Devi, who exudes a strong screen presence. She leaves an indelible mark in the minds of the audience.

Aamir Bashir as Kehri's friend and police investigator Bhupinder Hooda has nothing much to offer and is wasted.

On the technical front, with moderate production values, the film is astutely crafted. The violence though deadly is not so graphic or stylized as to be voyeuristic, but the climax is definitely shocking.

While the sound effects and music by Naren Chandavarkar and Benedict Taylor are used to great effect to pump up the mood that accompany the stylishly designed frames captured by Vivek Shah's lensing, the jerky edits mar the viewing experience.

The last number that accompanies the end-credits is soulful and worth the wait for the credits to wind up.

The gleaming, glittering surfaces of Gurgaon which stands between the violent hinterland of Haryana and the capital politics of Delhi, renders itself with ironic radiance to the themes of entrepreneurial greed and violence in cinema. Atul Sabharwal's "Aurangzeb" was an underrated attempt at understanding the strife that controls the monstrous affluence of the constantly-evolving region.

Director Shanker Raman's "Gurgaon" gets it right immediately and ineradicably. There is a sense of immediacy and doom in the storytelling, which coil themselves around the viewer from the first frame in such a persuasive manner that we are sucked into the tale, although some of what happens here is done more for effect than out of an inner conviction.

But the absence of credibility never comes in the way of the storytelling that achieves an unconditional littoral of pounding impact even when we see the bullet coming. "Gurgaon" reaches into the darkest interiors of its character's yearnings and is not afraid to come up with unsavoury home-truths.

Tripathy, who has so far played only economically challenged desperados with a touch of humour and irony, plunges into his first truly dark role (from the dhoti to the dressing gown, so to speak), with a vengeful intensity bringing to the patriarch's part a Hamletian ambition guilt and destruction that never overwhelm the narrative.

Tripathy's Kehri Singh is a study in unscrupulous self-advancement. He doesn't hesitate to brutally kill his brother. But is a doting fussing father to his foreign-returned daughter Preet (played with relative effeteness by Ragini Khanna).

But it's Akshay oberoi playing the outcast son who steals the thunder lighting and what-not. It's a big-bang performance, implosive and bursting at the seams with unspoken bitterness. Oberoi plays the truant son (a cliche in the crime genre) with much empathy and little compassion. In one sequence, we see him brutally violate a prostitute in a bath tub. We know what levels of violence Nikki is cabable of.

While Tripathy and Oberoi tower above the rest of the cast in the skyscraping crime drama, there is no dearth of engrossing performances throughout the simmering stunning span of the tense storytelling. In fact, one of this remarkably tactile thriller's USPs is its progressive tumble of interesting characters.

About 35 to 40 minutes into the film, we meet a young mild-mannered South Indian rock musician Anand Murthy (Srinivas Sunderrajan).

We don't know at that point of time how intimately Anand will get connected to the awful crimes that mankind often commits against his own blood. A little later, we meet a small-time hired killer Jonty (played with brilliant brio by Yogi Singha). Jonty joins the jamboree of violence like a stranger thumbing a ride to Hell. Midway in the heaving overtures to create an organic heft in the narrative, a close relative of the family Bhupi (played with grit and rigour by Aamir Bashir) shows up in what is known among commercial filmmakers as "interval-point dhamaka".

Do your business and come back quickly.

Where do these desperate specimens of crime-committing renegades come from? "Gurgaon" trails the bloodied path with diligent persuasiveness. It doesn't flinch from uncomfortable family secrets. And when these secrets tumble out in an unstoppered flow, the narrative sighs in deep languor while the characters make a mess that they can never hope to clean up.

Till the very end of this violent saga of internecine devastation, we are given clues and glimpses into minds and hearts that are governed by greed and felled by opportunism. The editing (Shan Mohamed) gives the narrative the appearance of a wound-up clenched crisis. The cinematographer Vivek Shah captures the city of ambition, greed and destruction with a flamboyance that secretes a deep hurt and wound.

These are characters born to doom. God bless them.

Shanker Raman, whose directorial debut "Gurgaon" opened earlier this month to rave reviews, says there is always a fear of being judged and misunderstood.Read More 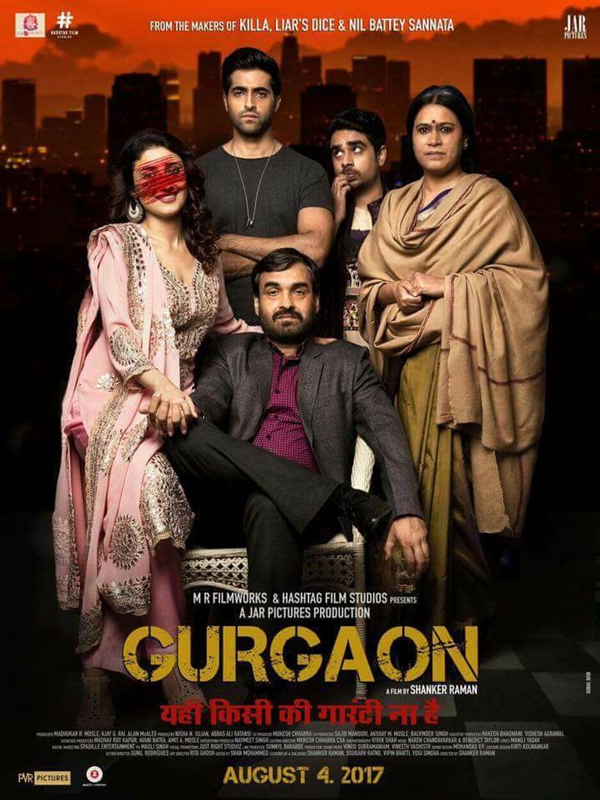