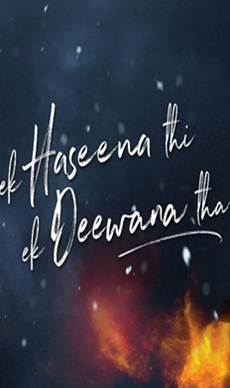 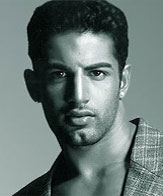 Designed as a mystery thriller with doses of re-incarnation and supernatural fantasy, "Ek Haseena Thi Ek Deewana Tha" is a convoluted tale not worth your ticket money.

At the very outset, you realise that this film is a waste of resources, when the caretakers of the castle react in a very dramatic manner while discussing the recent history of the castle.

From there, the narrative graph just slides downhill, with unintentional bloomers after bloomers.

Packed with fuzzy logic, we are given to understand, Natasha (Natasha Fernandez) desires to get married at her ancestral castle in a remote English countryside. So a month before her marriage, she travels all the way there along with her fiance Sunny (Upen Patel).

En route, she accidentally tumbles into a large water-body and is rescued by the enigmatic Devdhar (Shiv Darshan). Sunny senses that he will soon lose Natasha, and is convinced by the caretakers of the castle that Devdhar is an "aatma" -- a wandering soul who is trying to claim Natasha as she resembled her grandmother or mother, the Rajkumari Asha.

So while Sunny tries to keep Devdhar at bay, Natasha falls hook, line and sinker for Devdhar and is willing to kill herself. But she is stopped in time by Devdhar, only to reveal that he is no "aatma" but an assassin who has been offered 10,000 pounds to pretend to be a ghost and would get an additional 5,000 pounds to ensure that Natasha kills herself.

And now that Devdhar is in love with Natasha, he vows to unveil the mysterious person who wants Natasha killed. This forms the crux of the tale.

While the actors are committed albeit with their limited scale, they play their parts earnestly but in a perfunctory manner. Shiv Darshan as Devdhar, Natasha Fernandez as Natasha, Upen Patel as Sunny, Rumi Khan as Natasha's father Ramnesh Singh along with Soni Kaur as Rita and Lalit Mohan Tiwari as the caretakers of the castle, they are all effective.

But unfortunately, for the actors, it is the script that is their waterloo. With four writers credited, the plot and the characters are cardboard thin and a quick-fix. No time is spent on developing the characters and their motivation. Instead, it directly plunges into the action which makes the entire tale seem forced.

What's more, the dialogues seem heavy duty and poetic. If you follow the words seriously, you would crack up for the idiosyncratic expositions. At times lyrical, they make the entire narrative seem like an unintentional comedy.

On the production front, the film is technically well-mounted with ace production quality. The frames captured by cinematographer Amarjeet Singh are artistic and noteworthy and astutely layered by editor Archit Rastogi.

The music rendered by Nadeem Saifi of Nadeem-Shravan fame offers tunes that are so reminiscent of his 1990s hits. But, they by no chance elevate the viewing experience.

Overall, it is unbelievable that this film is mounted by the seasoned filmmaker Suneel Darshan, who had earlier delivered films like "Jaanwar" and "Andaaz".

Ek Haseena Thi, Ek Haseena Tha is an exhilerating journey of romance, passion, intrigue and thrill told in the classic world, where the chain of consequences were brought about by the dilemma of the young and naive Natasha, who set off for her destination wedding with finance Sunny to her ancestral property Mt. Unique Estate, only to fall helplessly in love with its stud farm keeper Devdhar. Consumed by his robust yet poetic, aggressive yet persistent advances, she realized that his arms were the ultimate destination of her dreams. But who really was Devdhar? A conman hired to destroy her bliss, a supernatural being or just a figment of her imagination...Torn between her lover and the one she dared to love, Natasha learnt that love is the deadliest deception when she engulfed herself into a vortex of devastating upheavals that left all those touched by it’s intensity heart broken and in a state of bewilderment.

Will Natasha be yet another sacrificial lamb before the societal decrees or will she fall prey to the greed and lust of her unknown enemies...will she rise from the embers of destruction like a phoenix and emerge the ultimate achiever of her dreams and ultimate destinations.