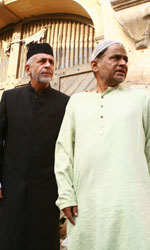 Nearly flawless, almost pitched perfectly to show the trauma of those who lose limbs, lives, love and faith in a communal carnage, Nandita Das` directorial debut leaves you speechless.

This is what cinema was always meant to be. But somewhere in its chequered course from information to entertainment, our movies began to feel like vaudeville entertainment meant more for diversion than intellectual stimulation.

Non-judgemental and utterly bereft of stylistic affections, "Firaaq" is a graceful and glorious homage to the human spirit. Much of its visual power comes from Ravi Chandran`s articulate but restrained camera work, Sreekar Prasad`s seamless but trenchant editing that leaves nothing (not even destiny) to chance, and Gautam Sen`s artwork which makes the city`s riot-torn colours emblematic of the red anger and the blue despair felt by the characters.

Set in those turbulent tension-filled days right after the Godhra incident in Gujarat, "Firaaq" depicts the loss of human faith and the complete absence of the rules of civilised conduct in the day-to-day working of the administration vis-୶is civilians.

Language, in fact, is an amazing tool of unhampered eloquence in "Firaaq". The characters in the riot-torn city speak in three languages Hindi, English and Gujarati. They do so without design or selfconscious purpose.

The outstanding words do not stand outside the characters` ambit of everyday expression (sometimes colloquial, otherwise poetic). Even when the narrative pauses to debate the polemics of communal politics among the characters, we the audience are one with the pause. This is excellence without the silent sound of applause. The spoken words are not designed for the camera. They are said because they have to be expressed.

"Firaaq" first and foremost deserves the highest praise for the remarkably even-pitched writing by Nandita Das and Shuchi Kothari. No character jumps out of the screen in trying to make its presence felt. The people who live in Nandita`s film are the people we know in one way or another.

And yet they are here, special in a very unobtrusive way. The narrative episodes, written with finesse and passion, are constructed to accentuate the post-communal friction among people who till the other day were neighbours. There is a mixed-married Hindu-Muslim couple. Before the day is done the husband (played with silent sincerity by Sanjay Suri) has made peace with his environment and the fact that his name is Sameer Sheikh, not Sameer Desai.

Sameer in the context of the film`s volatile communal statement becomes a metaphor for the Hindu-Muslim divide which is now a looming reality in middle class lives. The tact and grace with which "Firaaq" weaves through the communal tensions of unrelated characters all joined by their collective fear of a communal backlash are signs of a time when cinema and society at large need to do a serious rethink on their responsibilities.

"Firaaq" throws forward an assortment of unrelated characters zigzagging across a domain of doomed conscientiousness. Nandita Das`s narrative doesn`t attempt to unravel the enigma of a disaster-borne civilisation. It looks at the people, even the lowest and scummiest of them (including Paresh Rawal who bravely plays a middle class businessman who happily looted a Muslim shop and shared in his brother`s participative glee in a gang rape) with a kind of reined-in empathy that makes even the seeming perpetrators look like victims.

The villains, if any, are the administrative personnel shown to be running around abetting the violence. If this is a simplification in storytelling then it can`t be helped. Celluloid depictions of troubled times have to somewhere find tangible figures to blame for the injustice. Otherwise we would come away from a certifiable masterpiece like "Firaaq" wondering if there`s any sense of justice left in this chaotic world of self-serving brutality.

Das` narrative is propelled forward by powerful characters played by actors who not only know their job but also know how to make their jobs look like anything but professional hazard.

It would be criminal to pick performances. Deepti Naval (looking like a ravaged guilt-ridden avatar of the nurturing foster-mom Sharmila Tagore in Shakti Samanta`s "Amar Prem"), Paresh Rawal (as a trashy unscrupulous bourgeois broker) and of course the redoubtable Naseeruddin Shah (as an aged classical singer caught in a sublime time-warp) deliver performances that glisten with glory and sensitivity.

But there are dozens of other known and unknown actors furnishing Das` gripping drama with an inner voice that screams in protest without overstatement. The interactive drama bringing together people during crises never lapses into hysteria and homilies. The beauty of the drama of the disinherited is never diluted by clinging on to the inherent drama of any given situation.

Like life, Nandita Das` narrative moves on with confident steps creating for itself a kind of compelling circumstance when crises are a given, compromise a compulsion and surrender to fate the only means of survival.

Haunting and powerful in its depiction of a time when humanity is frozen in anguish and terror, "Firaaq" draws its tremendous strength from the screenplay and characters which seem to observe life`s keenest and meanest blows without flinching.

Here`s a film that must be seen not because it tells a story that touches every life. But because it touches our lives with such persuasiveness without resorting to overstatement.

Actor-director Nandita Das says the society will not move forward if the kind of policing done by a body like the Central Board of Film Certification (CBFC) continues.Read More

It's not necessary to adapt every book into film: Nandita Das

Acclaimed actor-director Nandita Das who is currently preparing for her new directorial venture "Manto" said that a book and a film are two different mediums and both have their own charm, so it is not necessary to adapt every book into a film.Read More

The story is set over 24- hour period, one month after a carnage that took place in Gujarat, India, in 2002. It traces the emotional journeys of ordinary people- some who were victims, some perpetrators and some who chose to watch silently. As an ensemble film, it follows multiple narratives that are at times interconnected and at times discreet, yet all are united by their spatial and emotional context.

A middle- class housewife closes the door on a woman desperately seeking refuge, and then struggles to overcome her guilt. The loyalty of two friends is challenged in times rife with fear and suspicion. A group of victimized young men seek revenge as a way out of their helplessness and anger. A modern day Hindu-Muslim couple struggle between the survival instinct to hide their true identities and the desire to assert them. A boy, having lost most of his family in the riots, wanders through the streets searching for his missing father. A saintly musician clings on to his idealism until an evidence of civil strife shakes his faith.

Though these character we trace the ways in which violence impacts both inner and outer lives. Violence spares nobody. Yet in the midst of the madness, some find it in their hearts to sing hopeful songs for better times.