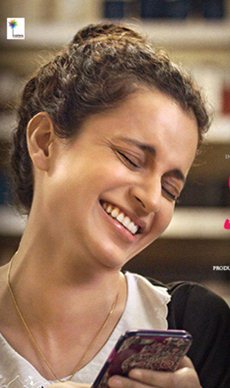 "Simran" is a film about an unconventional, 30-plus Guajarati divorcee Praful Patel who lives with her parents in Atlanta, works in the housekeeping department of a plush hotel and lives life on her terms.

Keen on buying her own property in the minority quota as it is affordable, Praful saves every dollar painstakingly, but one day in Las Vegas where she goes for her cousin Ambar's (Aneesha Joshi) bachelorette, she blows it all up in a casino. She is in heavy debt, owing $50,000 to a money-lender who means business. One thing leads to another and soon, she is sucked into the world of crime.

Overnight, the independent Gujju girl with chutzpah, becomes a bank robber with convivial ease. While Kangana Ranaut as Praful Patel, slips into this avatar effortlessly, the writing belies credibility. It seems far-fetched and amateurish to digest.

Director Hansal Mehta has taken oodles of cinematic liberty to create situations and trying to pass them as existent. Praful's character, however, is a well-etched one. He manages to make the lives of the Indian diaspora - their values, struggles, fears look real.

The film is racy and although the second half seems a tad long, it never really lets you stifle a yawn. Laced with abundance of humour, some straight- faced and witty dialogues, Kangana essays Praful Patel with her characteristic panache.

The film is Kangana's canvas all the way and she makes it come alive with her joie de vivre and histrionics, which seem natural coming from her. And that is what makes you overlook the flaws and keep you riveted to the screen.

The scenes where she is at the casino in Las Vegas and when she breaks down after her money is stolen, are a pure treat to watch.

Of course the other actors -- her father, Sameer (Sohum Shah), her prospective husband, the black money lender, all support her ably with their honest portrayal of their characters.

Cinematographer Anuj Dhawan, captures Atlanta in all its hues and the pulsating Vegas in all its glory. The music by Sachin-Jigar is apt and adds charm to the situations. "Meet" by Arijit Singh and "Pinjra tod ke" by Sunidhi Chauhan are melodious and soulful.

Overall, this frothy entertainer "Simran" is a film Kangana carries squarely on her shoulders and makes the most slipshod scenes look endearing. Watch it only for Kangana Ranaut.

Imagine if your child turns out to be a sociopath. This, in one line, summarizes the whimsical plot of Hansal Mehta's film.

Simran or Praful Patel, is no ordinary celluloid creation. She gambles all her savings away in Las Vegas and spends the rest of her time back home in Atlanta robbing banks to pay back her dangerous creditors (played by a mock-mafia of amateurish American actors).

It's hard to imagine anyone but Kangana playing a Gujarati bandit queen, shooting her way through a series of hilariously-staged heists where Praful alias Simran gets to try out several wigs that wouldn't fool a 5-year old, let alone the American law enforcers who take awfully long to cotton on to Praful's get-rich-quick scheme.

As written by Apurva Asrani, the script is a craggy mine-field of mind games, the script's surly skyline is filled with explosive devices threatening to detonate . Fearlessly Kangana walks that extra mile to play Praful/Simran as a muddled, utterly despicable daughter and selfish prospective bride. She is so conceited in her belief in her own right to survival at any cost that we wonder what her suitor Sameer (played with likeable ethnicity by Sohum Shah) sees in her.

In one tender sequence done by a serene lakeside Sameer expresses envy at how complete Praful is as a human being. The irony is completely lost on Sameer. Because Praful is anything but complete. A damaged derailed disjointed piece of bad news, Praful Patel must be the most disconnected heroine we've had in a Hindi movie.

She steals, she lies, she cheats and she makes her parents so helpless and embarrassed, you just want to slap this churlish delusional girl on the face for being such a nuisance.

Hansal Mehta doesn't try to build case for his heroine's sociopathic behaviour. What he does is, put Praful/Simran in situations that make her look progressively compromised and cornered. The narrative has an impressive build-up from a normal bickering Gujju family to all of Atlanta's police force looking for the 'lipstick bandit'. You see, Praful writes warning notes with lipstick before robbing banks.

One doesn't know how much of all this is actually true. The writing is deliberately ambivalent. The narrative takes us just deep enough in the dare-you-to-believe zone to suspend our disbelief. But a bedrock of sincerity and conviction runs through the film. In the way Praful interacts with her father (effectively played by Hiten Kumar) and with her unconditionally devoted and sincere suitor, shows Kangana's character in an utterly flattering light.

Kangana plays the part with a ferocious sense of ownership. There is not moment of Praful Patel's self-destructive hedonism that the character doesn't participate in. Kangana never stands aside. She dives deep into Praful, not afraid of encountering ugly home truths to the unbecoming personality.

That this morally reprehensible divorced child-woman (divorced not only from her marriage but also from a socially acceptable reality because what Praful wants, Praful must get) is shot amidst some of America's most beautiful suburbs, is a bonus. Anuj Rakesh Dhawan's camera lenses lavish much affection on the protagonist's idiotic crime plans.

Kangana looks so much at home in her character we feel she must have been Praful Patel in an earlier life. This of course is an illusion. No human being so flawed and fractured can ever be a role model, even to an actress as giving as Ranaut.

But that's the magic of a film which dares to deal with the ugliness of its protagonist without flinching and with much warmth and compassion. Hansal Mehta never sentimentalizes Simran's anti-social behaviour. He lets the Gujju girl grapple with her demons. Just how disturbed this girl is, comes through in the shocking way she attacks a man twice her age whom she suspects of stealing her money.

She will fight back when cornered, or when she feels cornered.

AMore than anything else, this girl needs a shrink. I am talking about Praful Patel. Not Kangana Ranaut.

Filmmaker Hansal Mehta, who had deleted his Twitter account, has returned to the social networking platform and thanked viewers for loving as well as panning his latest movie "Simran". Read More

After writing an open letter to Kangana Ranaut, playback singer Sona Mohapatra has slammed celebrities and their paid PR armies on Tuesday.Read More 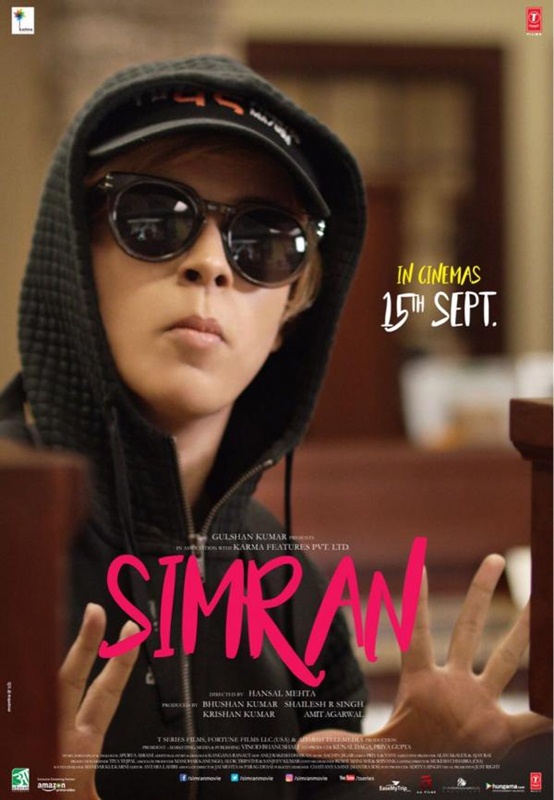 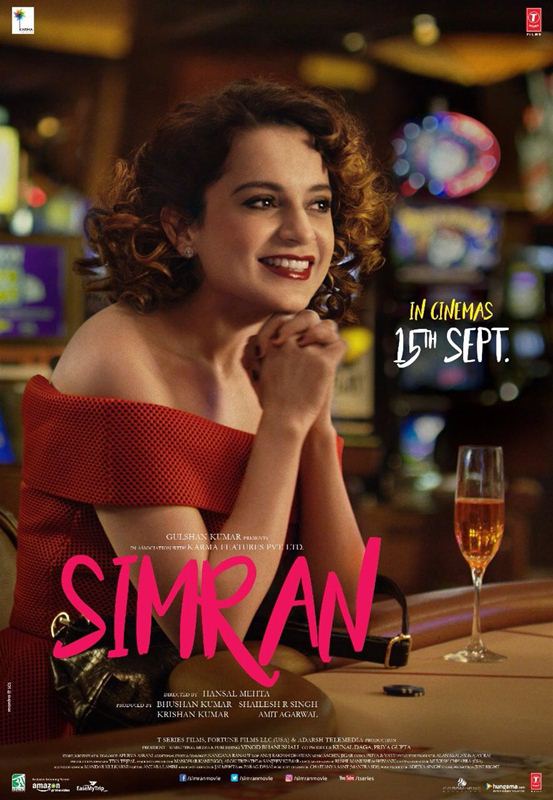 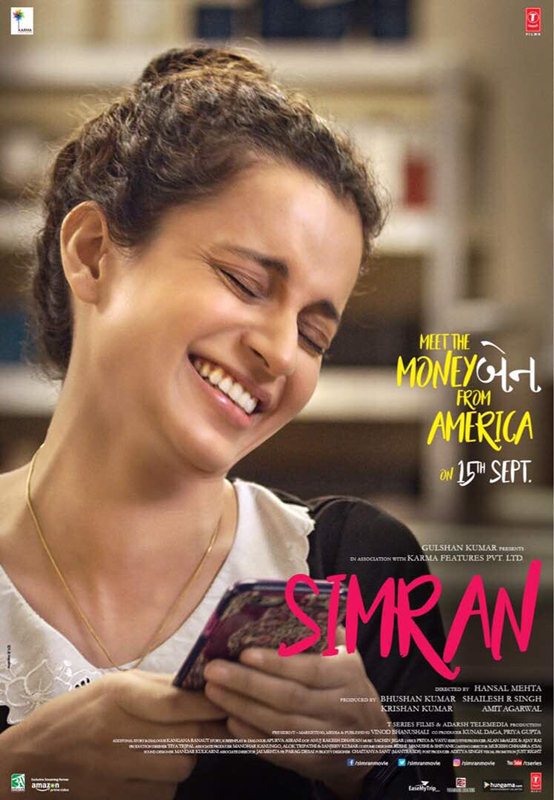