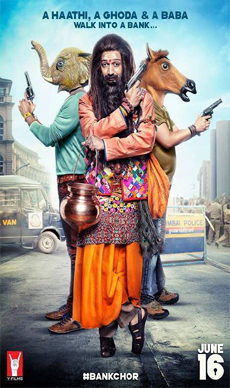 God promise, I tried hard to laugh at this silly concoction about three bumbling bank robbers, or "Bank Chors" (pronounced to rhyme with an ugly cussword in Hindi) who willy-nilly end up as heroes.

As the film closed with footage of Aamir Khan in "Dhoom 3", and Rs 2,000 notes began to rain down from the sky, I willy-nilly ended up cursing myself for being such a diligent movie buff, always, there, faithfully watching evaluating. Is this kind of faith one should have in our cinema when a reputed production house spews such garbage in the hope of raising a few laughs?

Indeed the first 20 minutes of "Bank Chor" is so inept clumsy and mis-directed, with the camera moving through the trapped characters like a lost Alsatian which can't find its way back to its owners, I wondered if it was a delayed April Fools's joke where producer Aditya Chopra would suddenly show up on screen and announce: "Fooled you, my dear viewers. Here's the real film now."

Alas, this IS the real film. What you see is what you get. Run out of the theatre, don't bother about the ticket money(though admittedly, the money could've been used to feed the starving children I saw outside the theatre), just run while you still have time. This is not only the worst film ever produced by Yash Raj, it wears its stupidity proudly on its sleeve, parading its grotesque sense of humour as though the joke was on us.

It probably is. Considering the audiences' complicity in the absurd plot is taken for granted. But let's be fair. The second-half of this ramshackle tongue-in-shriek tribute to the "Dhoom" series is a marked improvement on the first-half. Why and how? Well, without giving away the ingenious plot(as one of the minor character said "ismein itni sarcastic hone ki kya zaroorat hai?"), let's just say the first-half has Ritesh Deshmukh fooling around with his two outcaste colleagues played by Vikram Thapa and Sahil Vaid (interesting, this Vaid chap).

Curiously, a lot of the intended humour in the bloated unkempt banter is targeted at the Delhi-Mumbai divide. Characters trapped in the bank where heist makes for cinematic waste, take great pride in pointing out their place of origin, as though the place where they came from justified their level of heightened idiocy.

Even the villain, an interesting bloke as played by theatre actor Bhuvan Arora, sprouting Urdu diatribe lets us know he is from Faizabad.

Having figured put where all the characters come from, I am still wondering where this film's plot originates from. It tries so hard to be smart and sassy, it trips over itself in trying to be extra-clever. If you succeed in sticking it out to the end you will witness the finale's grand twist, so ridiculous and unconvincing it feels like a last-ditch effort to get our attention.

Too exhausted to feel sorry for the actors, I can only feel a sense of unmitigated annoyance at Riteish's self-deprecatory humour. During the end-credits we see him tell his two co-stars that they don't have the 'auqat' of even a Riteish Deshmukh. Ha ha.

"Bank Chor" reveals its 'auqa't early in its narration when the talented Vivek Oberoi playing a scowling CBI officer barges into the bank held up by the three clumsy chors and comes out without hurting a hair on their body. The unforgivably brainless goings-on could be stopped any time. But they goes on and on, skipping and hopping from one painfully contrived smart-ass episode to another.

This is film that THINKS itself incredibly clever and cocky. In actuality it is just a woefully tacky "Dhoom" ripoff with characters who seem to have watched the dubbed Bhojpuri version of "Oceans 11" at least 11 times.

Deshmukh's character believes in Vaastu. He should point us to the nearest exit door before catastrophe strikes us down.

It will take me a long time to get over "Bank Chor".

Imagine you are at a grand banquet and throughout you have been nibbling on tit-bits. At the end, though you are full, you realise that you are not satiated by the supposedly perfect festive spread that was laid out. That is exactly the feeling one gets after watching "Bank Chor". Though the film entertains you, you still feel unsatisfied.

On the face of it, "Bank Chor" is a perfect robbery-cum-hostage drama, but the plot unravels in a convoluted manner, "taking the stupidity to the next level" and this makes the entire viewing process a tedious affair.

The film begins on a promising note. Acting like the dumb and the dumber and a very nice guy who follows 'Vastu Shastra' at every step, Riteish Deshmukh masquerades as Champak, a monk in disguise. He along with his two accomplices Gulab (Bhuvan Arora) who adorns the mask of an elephant, and Genda (Vikram Thapa) who wears the mask of a horse, attempt to rob a bank. How they succeed in their plan, forms the crux of the tale.

Narrated in a non-linear manner, the writing is clever, but strained in an attempt to sound intelligent. The sub-plots are half-baked and underdeveloped, making the entire chronicle seem complexed and forced.

During the proceedings, the quirky characters seem shallow and unconvincing, so you refuse to invest in them. The performance by every actor is undoubtedly sincere. The three bank robbers are loud and over-the-top, befitting the characters they play. Riteish is a brilliant comedian, but he does not add any new nuance to his character. He is ably supported by Bhuvan Arora and Vikram Thapa, in their buffoonish act as partners-in-crime.

Vivek Oberoi in an underwritten role as the CBI officer in-charge of the hostage rescue operation is understated. Rhea Chakraborty as the news reporter Gayatri is perfunctory and Sahil Vaid as Jugnu the antagonist has his moments of on screen glory.

The humour is derived from self-deprecation along with Bollywood and comic-book character references, making the film a time-limited, fragile product.

The first half of the film meanders aimlessly with no seriousness whatsoever. The second half gets interesting and by the third act, though it may seem convoluted and exaggerated, the denouement perfectly wraps up the narrative, but goes overboard which ends up confusing the audience further.

The production quality of the film befits the Yash Raj Films label, and the background score, in parts, creates the adrenaline charged atmosphere, befitting a thriller.

Drop in career did not affect me, says Vivek Oberoi

Vivek Oberoi ventured into Hindi filmdom with "Company" and featured in films like "Saathiya", "Omkara" and "Yuva", followed by a dull period in his career with movies like "Kyun...! Ho Gaya Na" and " Kisna". The actor says it did not bog him down as he treated the moment as part of a roller-coaster ride.Read More

Introducing the worst bank Chor EVER: Champak Chandrakant Chiplunkar, a simple Marathi manoos played by Riteish Deshmukh who picks the worst day possible to rob a bank. To make matters worse, he recruits 2 idiots from Delhi who’ve never even picked a pocket in their lives. Now top that off with the craziest bunch of hostages including a high-strung housewife, a hyper chef, a possibly undercover cop… and Baba Sehgal. How could it be worse, right?

Wrong! Enter tough as nails supercop, CBI officer Amjad Khan played by Vivek Anand Oberoi, who shoots first and interrogates later. And a mad media circus outside led by fashion journo turned crime reporter Gayatri Ganguly aka Gaga played by Rhea Chakraborty. And you know the Bankchors are up for the worst day of their lives. Yet. The film promises to be a crazy roller-coaster ride with thrills, chills and certainly lots of spills.

Self-confessedly India’s STUPIDEST comic thriller, Bank Chor, directed by Bumpy and produced by Ashish Patil, is all set to embarrass its makers when it releases in theatres on June 16. 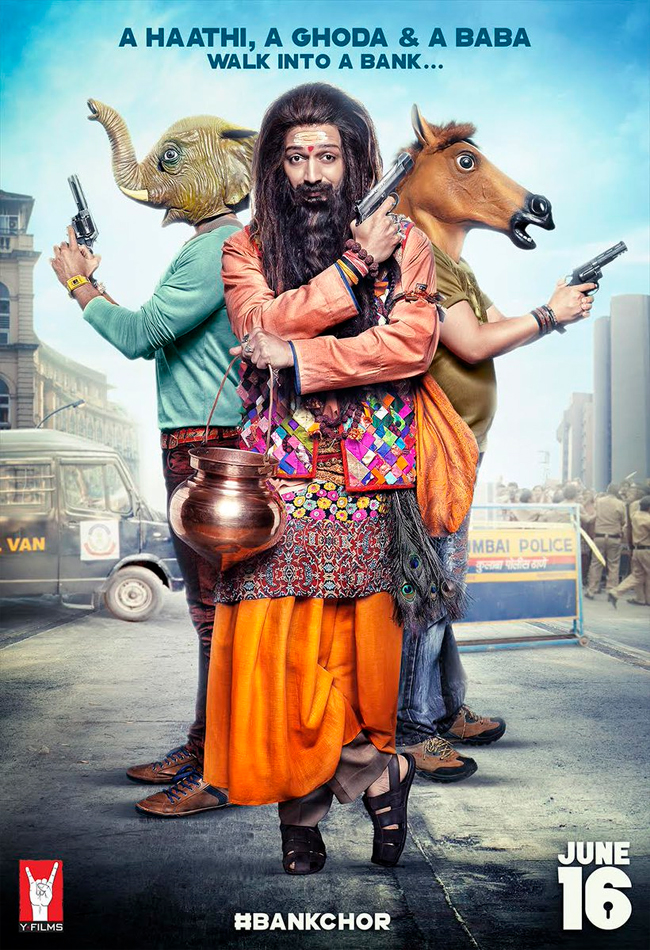 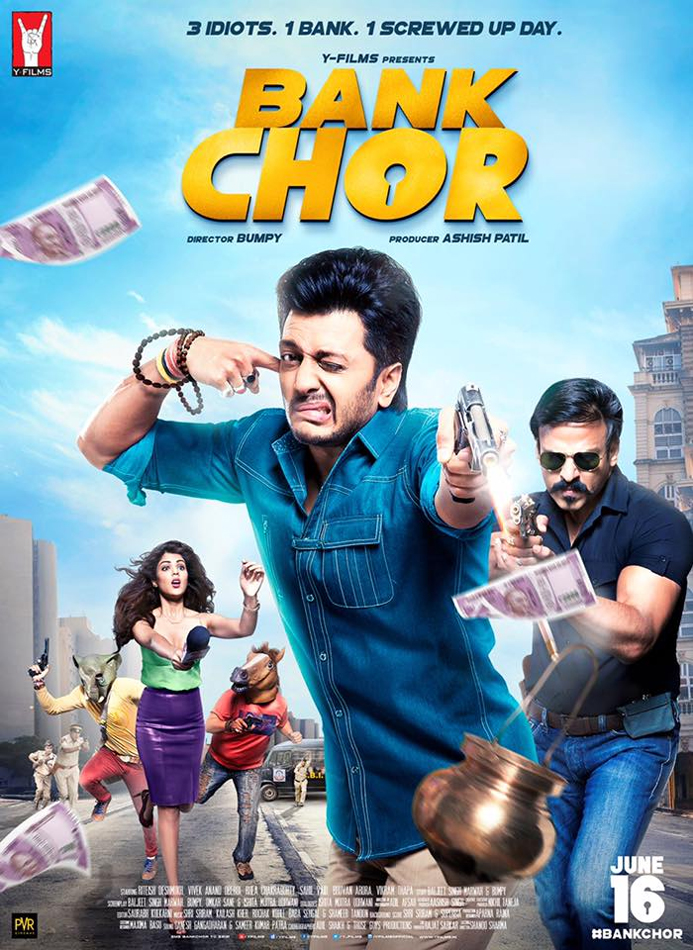