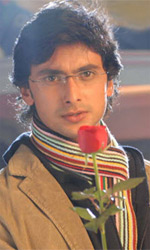 "Love Guru" does not have an unusual story, it is a love story told many times over.

But it is presented in the film with a fresh concept and a different type of background which enables it to have a larger appeal.

Director Prashanth, who has had some training in Bollywood, has brought in some novelty in presentation of songs and has ensured that all the characters in the film look real.

The highlight of the film is the composition and picturisation of songs which are done with style. Joshua Sridhar has done some wonderful work and will be remembered for this film, after his sensational music in Tamil film "Kaadal".

The film is made in a corporate background to gel with the silicon city status of Bangalore. Its appeal is largely to an urban audience.

The ambience, the clothes, the background of each sequence fits perfectly. The major characters of the film are young and behave much like today`s youngsters working in the corporate sector.

The confusion, depression, the happy mood, styles and mannerisms peculiar to the young corporate crowd has been well captured in the film. The colourful visual support adds a lot of pep to the film`s presentation.

However the way the film moves in the second half is a matter of concern and the climax is confusing. Director Prashanth should have worked out his second half a little more cautiously. That is because the first half of the film moves so well in an entertaining manner that second half may look a little dragging.

Still the seriousness that comes from Tarun`s character makes the proceedings a little interesting in the second half.

The story revolves around a young ambitious and assertive girl Kushi (Radhika Pandit) and a simple low profile Pratham (Tarun) who join a software firm on the same day. They start loving each other, but preferred to keep to themselves. Pratham tries many times to tell Kushi about his love, but all the time it ends up as a big joke. Kushi also finds Pratham little confusing and wavering. Meanwhile, Abhi (Dilip Raj) who is the boss of Kushi wants to marry her. Circumstances force Kushi to accept Abhi`s proposal. A dejected Pratham is totally confused.

Among the artistes, it is Radhika Pandit who steals the show. She is terrific with her expressions. Experienced actor Dilip Rai lives the role of Abhi. For Tarun this is certainly a big turn in his career. He has also proved to be a very good actor in this film.

The veteran artists of the film have fit in to their roles perfectly.

"Yaaru Kooda Ninna Haage" and "Thangaali Tandeya" are well picturised. Cameraman Saba Kumar has done a wonderful job with the songs. The camera work captures the sequences quite effectively. The art work is fine and matches the film`s background.

"Love Guru" is a must watch for its freshness, though the story is not off beat.