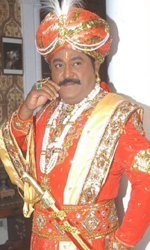 Director Guru Prasad had promised that his second film Eddelu Manjunatha would be a special film for actor Jaggesh who completed 25 years in the Kannada film industry this year. He has largely kept his promise and this film is certainly a milestone in the actor`s career.

The combination of Jaggesh and director Guru Prasad has struck again with another brilliant satirical presentation in Eddelu Manjunatha.

Guru has successfully made Jaggesh do the complex role of an alcoholic and a lazy brat who does nothing but talk. Here we see Jaggesh at his best in the role of a lazy, good-for-nothing husband.

Guru has narrated the film with a high degree of authenticity and the audience would be able to identify with the characters in the film.

The dialogues are not only realistic, they also have satirical overtones and the non-stop comedy lingers when you come out of the theatre.

The story revolves around Manjunatha, an alcoholic who refuses to change despite his wife`s efforts.

His wife works in a garment factory and takes care of the family, while Manjunatha spends his time drinking and wasting his time with his friends.

Finally Manjunatha`s wife decides to abort her pregnancy because she feels that she cannot take additional responsibility of bringing a child into the world when her husband is so irresponsible.

Jaggesh`s brilliant performance is the high point of the film. Yagna Shetty has portrayed her role quite effectively and proves that she is a talented actress.

V. Manohar has done a good job. Tabala Naani`s histrionics are worth a special mention. Anoop Sileen`s musical score goes with the tempo of the film.