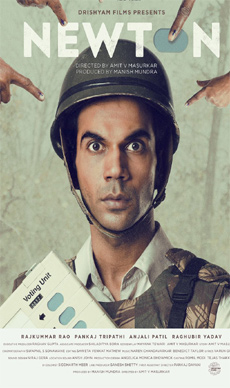 Set against the backdrop of elections in the world's largest democracy, "Newton" is an exemplary indie drama. It is the portrait of an idealistic man surviving in a society that is corrupt by tradition and lethargy.

Wanting to make a difference in society and to standout, Nutan Kumar (RajKummar Rao) who has completed his Masters in Physics, rechristens himself as Newton.

He is now working for the Indian government. During elections, despite being a "reserve" (standby) he is named the presiding officer of a booth situated deep in the jungles where 76 voters reside. The area is purported to be infested with Maoists. How Newton deals with the administration and the security forces to conduct the elections there despite the constant threat of an ambush from the Naxalites, forms the crux of the tale.

Projected in a fair and balanced manner, Newton's journey is truly an eye-opener. Initially, his gullibility is suspect, it borderlines to stupidity but Rajkummar Rao as Newton carries it with elan. You chuckle at his idiosyncrasies and conversations with his superiors and counterparts, especially when he attempts to conduct the elections by the book during the absurd circumstances. But it is his sincerity that touches the right emotional chord. It throws open questions about the democratic procedures adopted in the area and its projection by the administration to the media and the world thereby.

Rao is aptly supported by Anjali Patil as his assistant during the election process. She as Malko Neetham, the teacher in a local school and acts as a perfect balance to Rao's naive beliefs. As a local, she gives an appropriate insight into the plight of the oppressed tribals.

Raghubir Yadav and Pankaj Tripathi add some spark to the otherwise staid narrative. Raghubir Yadav as Newton's laid-back colleague, the near retiring Loknath is excellent. He keeps you entertained with his constant complaining of how he is forced to work under strenuous circumstances despite his diabetes and various health issues.

Tension brews with Pankaj Tripathi as Atma Singh the leader of the platoon deployed to provide security for Newton and his team members. He is natural with his patronising tone trying to demoralise Newton. And, it is interesting to watch him become submissive every time he tries to get his way around.

Of the supporting cast, the tribals have their moments of on screen glory. Standing out among them are the village headman, "Patil" and Mukesh Prajapati as the tribal Shambhoo, who assists Atma Singh.

Apart from the performances, the few things that stay with you much after you leave the auditorium are the visuals and the background score. Swapnil S. Sonawane's cinematography captures the rustic set-up with flourish. The music by Naren Chandavarkar and Benedict Taylor adds a subtle undertone to the sombre note of the narrative.

Overall, this simple, slice of life tale, is interesting, engaging and educative.

In Hrishikesh Mukherjee's "Satyakam", a film that echoes in unexpected ways in the new Rajkummar Rao experience, when Dharmendra the obstinate idealist, is asked why he stood second in his exams he replies: "Because the student who stood first was better than me."

Newton Kumar exactly that idealist from Hrishikesh Mukherjee's film grappling with the political irony of a country where a majority is too poor and illiterate to vote. Rajkummar's "Newton" is the guy who will shine if not outshine the competition by the strength of his convictions.

This is one more triumphant performance for Rao who has made a habit of conferring a brilliant narrative to every character he plays. Really, it's become a force of habit for this actor.

On the surface not much seems to happen in Newton. Writer-director Amit Masurkar is not sold on creating drama out of his plot's melting pot. He instead lets the characters walk that talk which exposes corruption with resorting to propagandist prattle. Newton doesn't fall into the trap of making its idealistic hero so above the democratic system to appear a messiah in the making.

On the contrary our diminutive hero often seems ridiculous in his stubborn adherence to guidelines and rules. There is a sequence at the very end where Newton's friend a level-headed quietly intlligent Adivasi girl (Anjali Patil) drops in at his office and suggests they go out for tea. But Newton won't leave for another 5 minutes until his official lunch break starts. As time ticks by we see the couple waiting, while we, sadly, must bid them adieu.

This is the kind of cinema where the characters must never entertain us by acting larger-than-life. The setting is a Lok Sabha election constituency in the heartland of Chattisgarh where Maoist violence has rendered the electorate redundant.Who was to know that a spirited idealistic election clerk would suddenly break through the inertia of non-performance in the jungles of Chattigarh.

Rajkummar Rao excels as the punctilious electoral babu trying so hard to do the right thing he finally ends up on the wrong end of the firing line. From that nervous blinking of the eye that Rao has assumed for his character to his simmering righteous indignation expressed in welters of idealism, the actor excels in a role so devoid of high points it feels like life.

Pankaj Tripathy as the local government official impatient to get the election over it and Anjali Patil as a local girl who accompanies Newton(so named by self because he didn't like his original name Nutan) to the interiors of the inaccessible jungles for a day in the electoral battle, imbue their habitual brilliance to the plot.

The narrative is in no hurry to draw up a convincing case for Newton's rigid idealism. He is what he is, and we accept his idiosyncrasies in the hope that he will eventually surprise us.And he does.

Adding to the flavour of unflinching realism is the authentic locations. The jungles virtually speak to us in every frame. Swapnil Sonawane's cinematography denudes the magnificence of the location to focus on the drama of the mundane.

As "Newton" and his bored colleagues proceed into places where voting is unthinkable, we are given a sense of the democratic process having to a go long way before the Newton Kumars at the bottom of the bureaucratic ladder can see the dawn of a new era.But then if we want to make a difference we can't remain indifferent.

"Newton" shakes us up in ways that are not visible to the naked eye.

Actor Pankaj Tripathi is broadening his horizons in regional cinema. After featuring in Tamil drama "Kaala", he is excited about debuting in a Punjabi movie.His Punjabi foray will be marked by "Harjeeta", directed by Vijay Kumar Arora.It is a biopic based on the true story of Harjeet Singh, an Indian professional hockey player, who captained the Indian squad at the 2016 Men's Hockey Junior World Cup. Pankaj will be seen playing a hockey coach to Punjabi actor and singing star Ammy Virk.Read More

Rajkummar Rao plays Newton, who is trying to conduct a free and fair election against all odds. 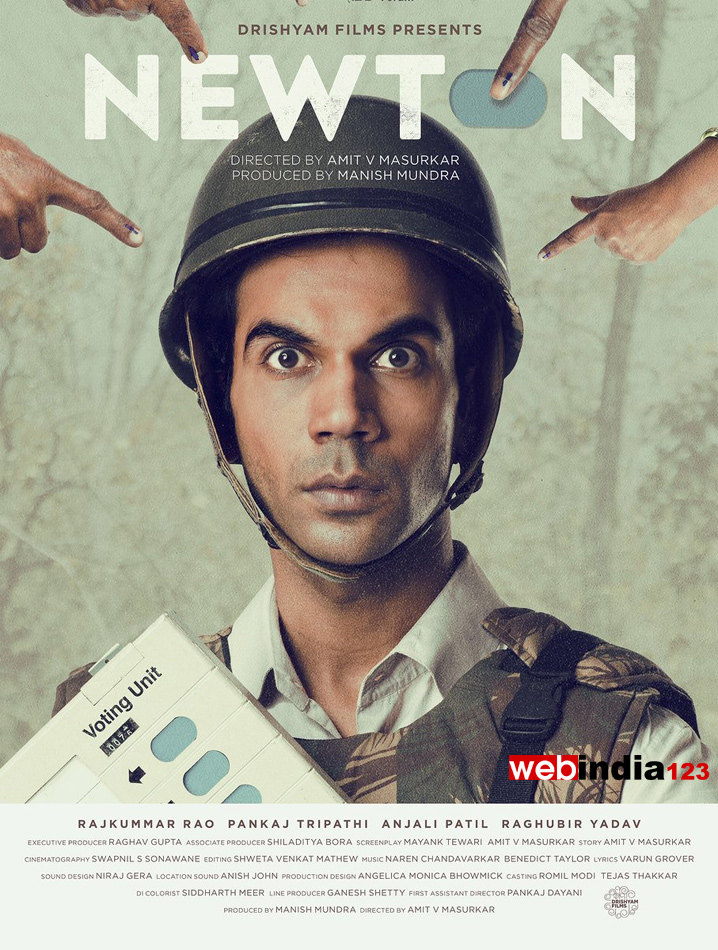 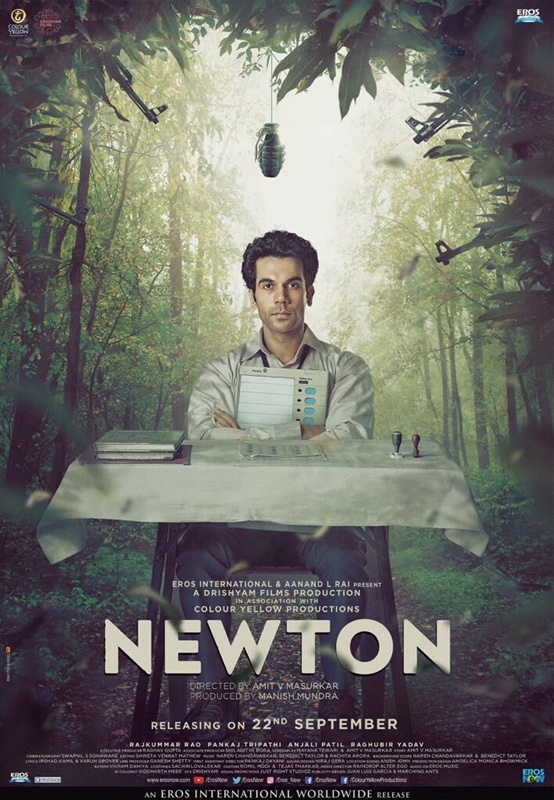 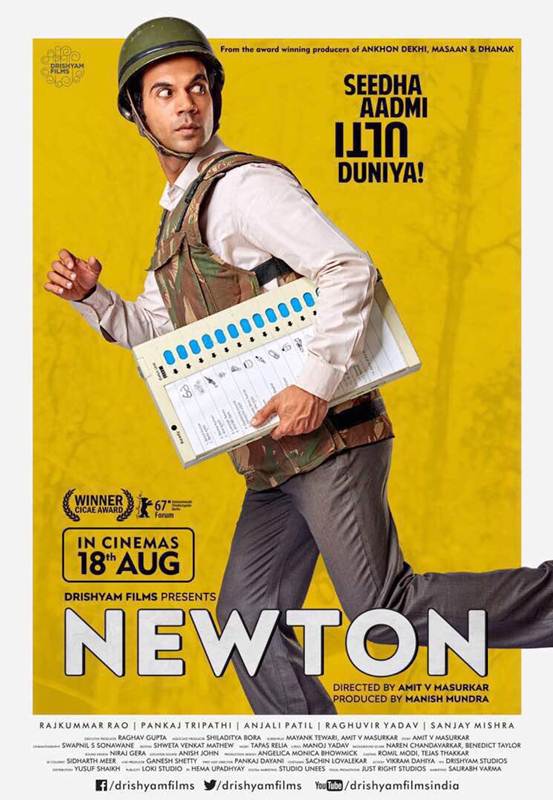