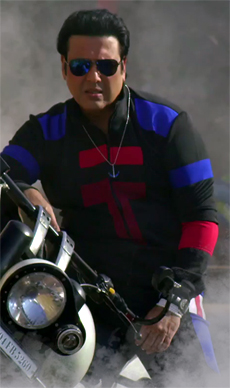 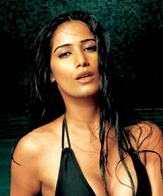 Giving this film a single star, is being gracious. This film, produced by Govinda, is supposed to be a vehicle to help him resurrect his non-existent career.

But instead with "Aa Gaya Hero", director Dipankar Senapati has ensured that he lands up being a zero.

It is about crime, criminals and a sincere police officer who is trying to correct the wrong-doers. With multiple sub-plots running simultaneously with no concrete goal, the film seems like a litany of crime gummed-up like a cheaply made documentary which is occasionally punctuated with songs.

Govinda plays Inspector Ravindra Verma, an honest, earnest and fearless police officer who is genuinely concerned about bringing down the crime rate in the country. He tries to maintain law and order by using a strategy called 'Abhinay Chakra' but not before presenting a file about this to the president of the country.

The 'Abhinay Chakra' is a philosophical take on how all of us are actors and each and every one of us are merely playing our parts.

Unfortunately, the film is obnoxiously crafted as it lacks finesse in all aspects right from the writing to the execution. The script while trying to be subtly self-glorifying, is messy, outdated and crass.

'In one scene, while Ravindra is chasing a goon with a baton ready to strike him, the goon tells him: "Tum kanoon ko haat mein nahin le sakte (you can't take law in your hands)", to which he retorts shaking the baton, "Nahin, isse hilata rahoonga," this implying a smutty innuendo and there are a few of them.

The film feels like a Z-grade film of the early 1980s. Packed with numerous characters hamming while mouthing inane lines is saying the least.

Joining Govinda in this jamboree are Ashutosh Rana and Murali Sharma as brothers and local goons, Makrand Deshpande as the spineless MLA, Surendra Pal as a politician, Harish Kumar and Chandrachur Singh as inspectors along with Poonam Pandey and Richa Sharma as their colleagues in disguise.

The film boasts of a number of songs with Govinda doing his signature steps in each one of them. Unfortunately, Govinda and his steps now seem jaded. He lacks the energy and charisma he once exuded.

On the production front, the camera work is tacky and the computer generated images are of poor quality.

Overall, even Govinda's fans would squirm while watching this film.

I went through the singular experience of watching your latest film touted as your comeback, but severely savaged by critics as being too "1990s" to be taken seriously now. In case you didn't notice, it is 2017. But when critics say "Aa Gaya Hero" is too 1990s, I don't know what they mean -- because even in the 1990s, your films made by your friends like Pahlaj Nihalani and David Dhawan, looked like they came 30 years too late.

But anyway, those films back then like "Shola Aur Shabnam" and "Hero No 1" were fun, if you liked that sort of a thing -- thrusting pelvis, double meaning comebacks... Now the pelvis doesn't thrust. It thirsts.

There was the inimitable and remarkably witty Kader Khan for company back then. Alas, Kader Khan is no more part of your journey... The wit is gone.

In a scene in "Aa Gaya Hero" (Here Comes The Hero???!!!), I was aghast to see the theatre stalwart Makarand Deshpande saying something as sleazy as -- and I translate loosely -- "When you grow older, what goes up in your younger days, stays down."

I am pretty sure that was Makarand, though I could be hallucinating. I also think I saw Poonam Pandey in one shot. I have no idea what she was doing with you, or why she was doing what she was doing/not doing. This film had that effect on me. It is like a lengthy, disjointed, incoherent, tawdry and tacky homage to the honest-cops sagas of the 1970s, executed by someone high on dope and low on hope.

"Aa Gaya Hero" could pass off as a spoof on Prakash Mehra's "Zanjeer" and Govind Nihalani's "Ardh Satya", if only the director (where did you find him???) had the sense of humour to carry off a satirical look at the khakhi genre.

You know, how "Deadpool" spoofs the superhero films? The only entity "Aa Gaya Hero" ends up ridiculing is you, Govinda -- once a star now reduced to a pale shadow of what you once used to be.

The swagger of "Sarkaye lo khatiya" is replaced by a grotesque parody of the funny-entertaining hero who once was King. Who is this impersonator on screen? And what is he doing in this pathetic patchwork quilt of a product, parody that parodies the parodic Govinda film of the 1990s, with gaping holes and ongoing continuity lapses.

Clearly, the editor has used a butcher's knife on the footage, not knowing what to cut because it was all so messy.

Where is the real Govinda? Why has he allowed this charlatan to take over? If I was you, Govinda, I would slap a defamation suit against the people responsible for this hideous travesty.

Nobody must do this to Govinda. Not even Govinda.

Actress Poonam Pandey says her newly launched app, which she promised would have "bold" content, has been banned by Google.Read More

Govinda to go live on TV