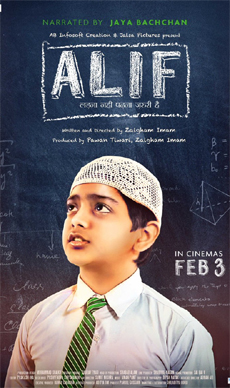 'Alif': Its statement on Indian Muslims must be seen by every Indian (Review By Subhash K. Jha; Rating: *** ½ )

Varanasi is a city of the holy waters and unholy bloodshed. The deep divide between the Hindu and Muslims is never crossed. It takes guts for a filmmaker to cross over from one restricted area into another to take a long hard look at a life lived on the fringes of both the communities.

"Alif" addresses itself to the very sensitive and relevant issue of the isolation of the Indian Muslim. It neither resorts to the stereotypes of the ‘Muslim social' nor does it look at the community as persecuted and injured by self-inflicted welters of radicalism.

This small film with big aspirations looks at the economically challenged existence hovering stubbornly at the fringe of self-destruction, trying its utmost to remain beyond the ‘isms' and the cataclysms that threaten to annihilate the community from mainstream existence in our country.

"Alif" is sometimes too eager to pack in an excess of ideas. However, the narrative is not bogged down by its own aspirations. Rather, writer-director Zaigham Imam's fortitude of conviction and sincerity of expression gives the jumpy uneven film a pattern of serene motions even when the characters' motivations and behaviour get choppy and unacceptable.

There are some glaring flaws in the narrative, too glaring to even be mentioned. And some performances are awkward and embarrassing. But what remains with us is the earnestness of a storyteller whose heart bleeds for a community.

"Alif" is the story of a young boy named Ali (played with endearing sincerity by Saud Mansuri) whose father is a hakeem. When aunt Zahara (Neelima Azeem, rousing in her impassioned dramatics) visits Varanasi from Pakistan she wants changes, radical changes in her brother's family.

In a heart-warming moment of family togetherness, the father lying inert on his deathbed is pulled out for a bath in the courtyard. The boy Ali whom Zahara soon gets to dote on must stop going to the madarsa and start attending a proper English school.

No one dares to say no.

It is here that the narrative chooses to get discernibly frank in its dissection of the discrepancy of the educational standards in the traditional madarsa and the conventional schools.

Ali's brutal humiliation in the new environment, his lack of basic schooled knowledge, are depicted in harrowingly broad strokes which, regrettably, don't work in other sections of the film.

A budding rooftop romance between a radical Muslim educationist and the girl next door is nipped in the bud when he confesses he loves only God.

"How can you love God when you can't love someone who is standing in front of you?" she screams. The performances in such sequences are caricatural. But the heart is in the right place.

This thwarted romance and many other plot manoeuvres in this loftily intended melodrama echo M.S. Sathyu's classic "Garam Hawa" on the isolation of the Indian Muslim. It is a tragic commentary on our social order that the situation described by Sathyu three decades ago remains largely unchanged for the community that continues to suffer in isolation.

"Alif" doesn't wallow in self-pitying anger. Although there are some unfortunate attempts to demonise the other community, the characters remain largely compassionate and non-judgmental.

What I took away from "Alif" was the warmth of a closely-knit family and specially the kinship that develops between the little boy and his aunt from Pakistan. Sadly, there isn't enough of this bonding in the plot which runs helter-skelter in pursuit of diverse strands in the cultural and religious contradictions that today threaten to erode the credibility of an entire community.

The film's politics is, at best, unobjectionable. It's such a pleasure to watch Neelima portray the domineering matriarch. She presides over the proceedings in her truncated role like Shaukat Azmi and Farida Jalal in their most memorable films. At one point she scolds a wretchedly mean Hindu teacher for harassing the film's little boy-hero.

"Just because he waved a Pakistani flag on Republic Day you branded him a terrorist?" she asks with an innocence that completely abnegates irony. This innocence of an apolitical entity in an environment of throbbing politics is refreshing.

For all its faults, "Alif" must be seen for its strong message on the importance of formal education for every child, even if it means offending some who would rather have the young imprisoned in ignorance. Light, says the film, is life. For this message alone, "Alif" deserves a round of applause.

As in his debut film "Dozakh - In Search of Heaven", which was officially released in 2015, director Zaigham Imam's "Alif" is a well-meaning, simple, yet layered story that highlights the need for Muslims to rise above their ghetto mentality. It mirrors the society with complete honesty.

Set in Varanasi, the film is narrated from Ali's point of view. Ali is the son of Raza, a Hakim -- a physician using traditional remedies prominent among the Muslim communities. During his formative years, under duress Ali is forced to attend a madrassa. How he breaks free to educate himself and becomes an allopathic doctor, forms the crux of this tale.

Written and directed by Zaigham Imam, the narrative is uncomplicated and sincere. The screenplay unlocks simply, through the realistic lives of its characters, bringing to the fore societal pressures like guilt, redemption, prejudices and romance in a society fragmented by religion.

Every character is intricately well-etched and the actors leave an indelible mark with their performance, albeit at times with an over-the-top recital. Nevertheless, there are a few scenes that touch the right notes. Saud Mansuri as the young Ali slips into his character with ease. Though his performance seems a bit staged, he is naturally endearing. It is equally delightful to watch his friend who plays the character Shakeel.

Apart from the kids, it is Danish Hussain who delivers a realistic performance as Raza. He portrays his guilt, angst and resentment, in an understated manner. He is every inch the remorseful brother who tries hard to attain redemption.

The kohl-eyed Aditya Om as Jamal, the newly appointed teacher at the madarassa, Bhavana Pani as Raza's wife, Simala Prasad as Shamim - Raza's niece and Jamal's love interest, are all equally effective.

In a pivotal role as Zahara -- Raza's Pakistan-based sister, Neelima Azeem although an otherwise versatile actor, is an eye-sore in this film. She hams throughout the film.

Jaya Bachchan's voice-over is distinct and adds gravitas to the narrative.

Apart from a few sound synchronization issues, the film is astutely mounted with moderate production values.

This is a well-made film that would appeal to cinema lovers who throng the festive circuit.

Alif is a movie about a father, his son and his ambition to make him a doctor. His fight with the orthodox seminary education and his fellow neighbours.Hakim Raza who lived with his orthodox family in a Muslim majority area of Benaras, wanted his 10 year old son, Ali to study in a good school but couldn't enroll because of fear of old riots as they all were in Hindu locales. His life changed after his sister came to India from Pakistan and insisted him to enroll Ali in good school. This caused a tension with his neighbor and seminary teachers who started threatening Hakim and persecuting Ali with false reasons as they wanted him to become a scholar of Quran while Hakim & Zahra wanted him to become a doctor. Could Ali become a doctor and how Hakim Raza saves his sister is all about Alif. 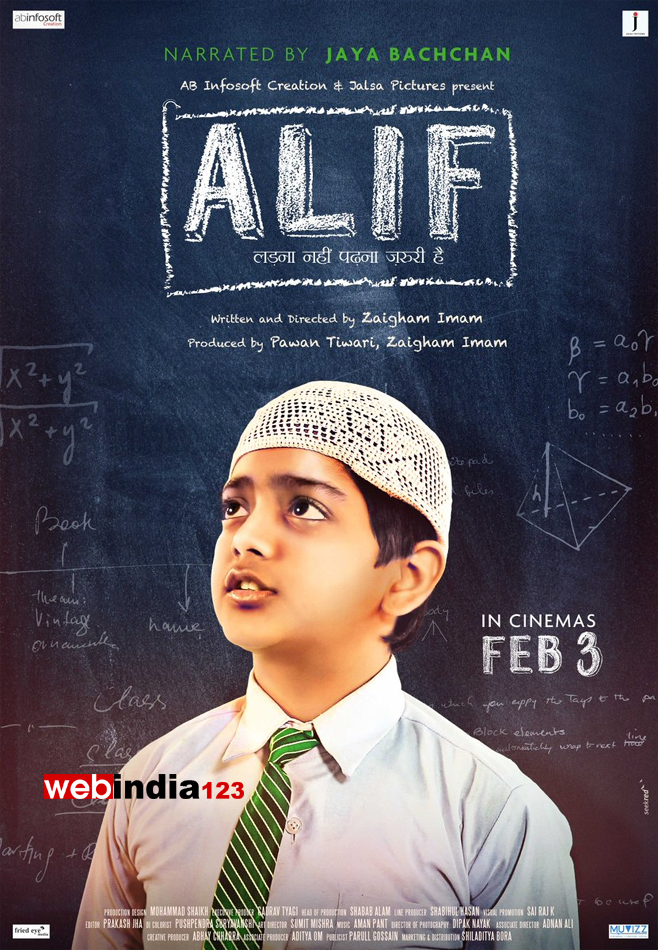 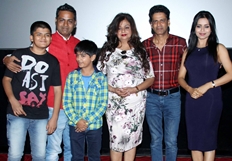