Chamkaysi Chindi Udaysi is a Kannada - movie directed by . Starring . 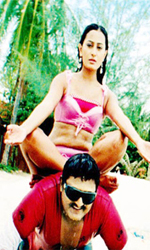 Though it was publicised as an original film, A.R. Babu`s "Chamaayisi Chindi Udaayisi" is clearly a remake of 2005 Hindi film "Deewane Huye Paagal", which in turn was inspired by Hollywood flick "There`s Something About Mary".

Babu seems to have remained faithful to the Hindi version. "Chamaayisi..." makes a good beginning as it brings the house down with comical situations, but ends up with a disastrous second half.

The second part is so dragging that it may well put you to sleep.

The story revolves around Bottu Seenu and his two friends Ramu and Raghu, who are cheated by a finance agency. Seenu and his friends, who are all bluff masters, fall in love with Kamala, who rented a house near near Raghu`s home.

The friends are disappointed when Kamala leaves for Malaysia. But a guy called Ganesh finances Seenu`s trip to Malaysia to trace Kamala. Seenu spins a long yarn and tells Kamala that he is an architect. The heroine, meanwhile, has become a busy model.

Soon Ganesh also comes to Malaysia. There is a crime angle to the story as a mafia group kills Kamala`s brother over some diamonds. What happens in Malaysia and who Kamala chooses in the end is what the story is all about.

Komal is brilliant as an actor as he literally lives his character.

Nidhi Subbaiah`s glamour quotient helps the film, but the actress isn`t great in emotional sequences. Sharan is impressive in his role and Giri flaunts his flair for comedy. Veterans Umashri, Shobharaj, Mukyamanthri Chandru do justice to their respective roles.

The film is technically sound. Well-known cinematographer and director Ashok Cashyap charms you with some fantastic visuals and frames. The dialogues by Manju Mandavya are entertaining and funny. Balaji`s music compositions include some hummable songs like "Bejaanaagi Premisu" and "Rabne Bana Diya", which are well choreographed too.

The major drawback of the film is that director Babu has failed to maintain a good tempo. Even in the first half, there are unnecessary sequences that could have been chopped off.

"Chamakaayisi..." has many loopholes but it is worth a watch for the entertaining dialogues.