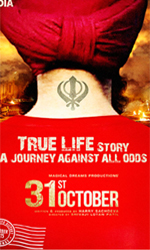 I was very young on the day Mrs Indira Gandhi died. I remember the nationwide horror of losing a beloved leader and how it was overshadowed by the horror of watching Sikhs being dragged out on the streets and burnt alive for the ghastly assassination.

I remember everyone said, 'How can the country go on without her?' But it did. History of genocide has a way of repeating itself, unless we learn from the mistakes we make in the past. So here we are 32 years later looking at a film that recreates the chilling carnage of an innocent community made vulnerable by the crimes of a few.

The film, made with touching earnestness, opens on the morning of October 31 depicting an ordinary day in the life of an affable Sikh family. The cut-and-dried treatment of the film, and our knowledge of the dreadful events that transpired on the day, give to the narration a kind of authority and power to move and shake us even when the goings-on onscreen are quite often underwhelming, both in terms of execution and performance.

Made on a meager budget, "31 October" is a big-hearted attempt to bring us the ghastly incidents on that fateful day through the eyes of a traumatized Sikh couple, played with reassuring sincerity by Vir Das(very convincing in his turban) and Soha Ali Khan(whose Punjabi accent makes a guest appearance at the start and then vanishes as we go along).

Their two little sons and their austere yet idyllic low-income existence in a Sikh-dominated locality of Delhi is ripped apart by communal violence so savage it shakes us to even see it onscreen so many years later.

Like Mani Ratnam's "Bombay", this film humanizes the terrible violence by throwing in two little boys and sundry characters who are chillingly real either in their demonized avatar or their humanism during the days of acute malevolence. Specially gripping is the Sikh family's car journey from imminent death to relative safety with the Sikh patriarch locked in the trunk of the car to avoid detection.

For all its made-to-shock manipulation, the scenes of violence and savagery shock as they are rude reminders of how vulnerable we all are as individuals and as a community. That day it was the Sikhs. On another day it is the Muslims or Hindus. Who is safe from separatist violence in this country?

The melodramatic yet moving film makes this point with telling affect. It also shows the psychological warfare that human beings unleash on one another when political crimes intervene in ordinary lives.

When the assassination happens the stunned nation is shown glued to the radio while the affable Sardar-hero is instantly isolated by his office colleagues. Outside, his wife out shopping is caught in the sudden eruption of violence. Elsewhere a drunken NRI mona Sardar pleads with the rioters to be killed like his friend was, and a drunken lout offers asylum to a panic stricken Sardarji in exchange for his cash and gold chain, only to hand him over to the mobs.

Such characters and incidents belong more to a long-running Doordarshan serial than a feature film. Much of the drama is theatrical and the acting is plainly amateurish. But "31 October" is a film that must be seen more for what it tells us rather than how it says it, about a shameful chapter from Indian history.

At the end we see the now-old Sikh couple, trapped in a web of frustration and rage, still waiting for justice.

My daughter is my latest project: Soha Ali Khan

Actress Soha Ali Khan says her daughter is taking most of her time and she is enjoying the phase.

Soha, who mesmerized the audience as the showstopper for designer Neeta Lulla at Delhi Times Fashion Week, says her daughter was her latest project.

"I think everyone keeps asking what my next project is. I think project Inaaya is taking up most of my time right now and quiet happily so," she said.

Asked about the values she would want to instill in her daughter, the actor said, "I want Inaaya to be her own person. I would like her to have open communication with me. Things likeRead More

1st October,the first mainstream film ever based on the assassination of Indira Gandhi and what it led to. Set against the backdrop of 1984 anti-Sikh riots, the film is a true-life story of a Sikh family and their fight for survival. Produced by Magical Dreams Productions Pvt Ltd and Harry Sachdeva and directed by Shivaji Lotan Patil,`31st October` stars Vir Das and Soha Ali Khan in the lead roles.

The film is a depiction of one of the most important dates in Indian history,the day India lost its Prime Minister, Indira Gandhi.She was shot dead by her own bodyguards, which changed the political scenario of the country to such an extent that many innocent lives were lost and India witnessed a black Wednesday.It is a story of human emotions,conflicts,survival and friendship.