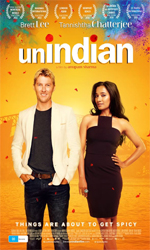 `UnIndian` could well be titled `There's a White Naked Man In Our Daughter's Bedroom`, as one of the film's intended high-points occurs when Brett Lee saunters out of his lady-love Tannishtha Chatterjee's bedroom only to run into her shocked parents in the living room.

In his nervousness, he drops his towel. The joke doesn't end there. Mira's father stares at Brett's crotch and exclaims, "You are not wearing a chaddhi."

This stating-of-the-obvious business is a force of habit in the film. Everyone is doing it all the time. Thrusting banal home-truths into our faces until we cry for mercy. But who's listening? Everybody, brown or white, is busy dancing to Bollywood beats manufactured in factory-precise doses for global consumption.

Come to think about it, from the opening shots of Mira and her sandalwood-centric parivar (family) in Melbourne, to the closing scenes where Mira must rush to the airport to stop her lover boy from flying away. Every dialogue and situation in "UnIndian" is designed as a homage to the corniest conventions of Bollywood.

All this would have been marginally enticing if done in the spirit of spoof but no, the writers and the director are fully and solemnly into the spirit of Bollywoodizing Brett. Mira's ex-husband we are told, is gay. And mean.

"I tried to help him to come out of the closet. But he thought I was trying to malign his family name," Mira whispers tragically to Will. Having played a lesbian lately in "Angry Young Goddesses", Tannishtha is well qualified for the job.

Poor Gulshan Grover, wearing a pink shirt and tie, kidnaps his daughter and is chased down by the Aussie cops. Stereotyping is so prevalent in the film, we could write a book on the various communities' characters and cultures that are straitjacketed in this fluffy over-sweetened confection.

The kindest thing that can be said about cricketer Brett Lee's acting debut is that he doesn't make an effort to act. He is happy being himself most of the time except when he has to make love to his co-star. That's when things get really uncomfortable for poor Brett.

Tannistha and Brett are also ill-matched. They seem to belong not just to two cultures and continents but two different planets. So when the boorishly scripted plot has Lee's character going suddenly crazy over Tannishtha's single-mother Mira, you wonder what he has been smoking.

And what, pray tell, was the director smoking when he embarked on this made-to-order cross-cultural romance? It reads like an immigration manual on how to hook an Australian to get citizenship in their country, or inversely a cricket manual on how a retired cricket star can make a Bollywood career.

There is no kinder way of describing the trite, corny and altogether atrocious stereotypes that the film flings in our face, presumably to promote India-Australian amity. Tannishtha, a powerful actress at best, is thoroughly miscast as the single mother struggling to bring up an increasingly demanding daughter Smita(played with a likeable gravity by young Maya Sathi).

"UnIndian" is littered with lazily written scenes with dialogues to match. The situations in the script are played out strictly by numbers. The love-making scene between Brett and Tannisha, seriously chopped off, looks like it could do with some excitement from both the parties.

The performances range from the strange (the normally likable Supriya Pathak as Mira's mother is hammy and cartoonish) to the tolerable (Tannishtha struggles to slip in a semblance of sensitivity to her uni-dimensional, single-mom character) to the genuinely likeable (Arka Das as Brett's pal gets into the swing of things even when there isn't much to swing to).

As for Brett Lee, like his namesake he gets a "kick" out of playing to the gallery.

Beautiful divorcee and single mother of one, Meera (Tannishtha Chatterjee) is an Australian of Indian origin. Smart and independent, she has carved out a successful life for herself and her daughter..despite family pressure to find 'a nice Indian match'. Then Meera meets Will (Brett Lee)..tall and blonde with a charming smile. But falling in love with an Australian man is not only scandalous - it's unindian! Does she do as her family wishes?.. Or does she follow her heart and live her life the way she wants? Highlighting the complexities of wooing another from a different culture, unINDIAN is a comedy with a lot of heart and a little spice! 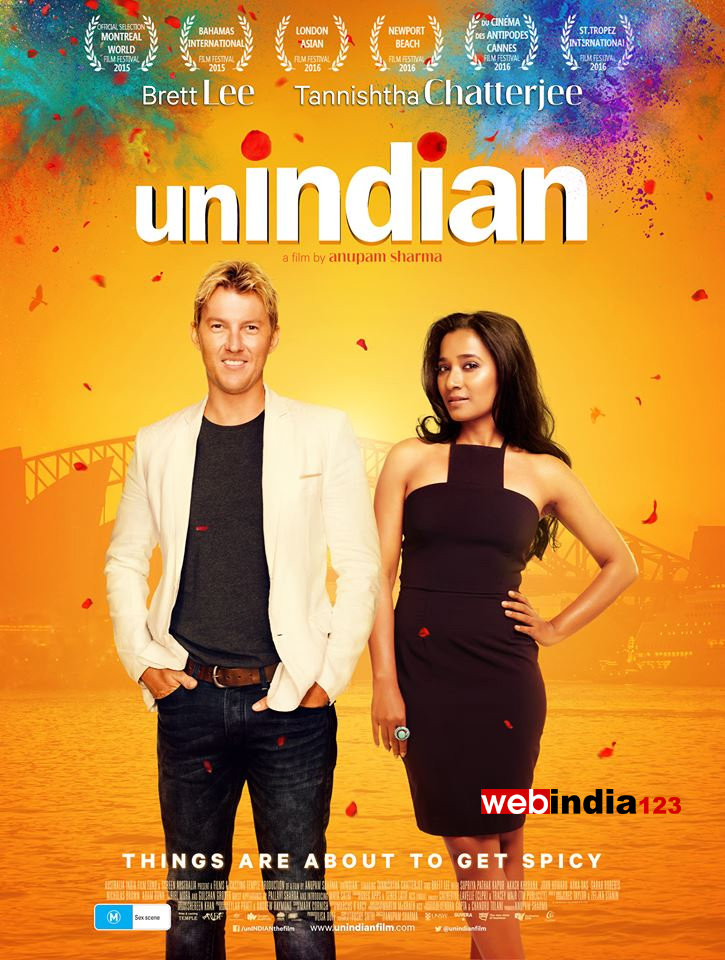