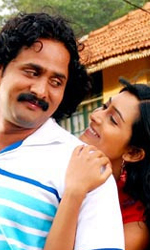 Nagathihalli Chandrashekhar is a director whose films are not formula specific, but yet have elements that engage and enlighten the audience.

Being an established writer in the Kannada literature, he has always strived to maintain a degree of creativity in his films which portray the realistic side of our day to day life.

"Olave Jeevana Lekkachara" is, however, a mixed bag.

The narration oscillates between good and very good in parts and sometimes falls steeply to negate the positive impact.

In this film, Nagathihalli takes on the pseudo intellectuals who inflict serious damages to the lives of gullible young minds. Nagathihalli portrays in a satirical fashion, how these so called intellectuals brazenly decry the values of life and yet cling to the same values as a matter of convenience when it suits them.

Nagathihalli narrates the story with a tinge of sarcasm which is a delight to watch. And he has been helped by his own writing skills. The dialogues are crisp and hard hitting.

But the film`s uneven pace in the first half and some unbelievable sequences are a dampener. And though the film picks up pace in the second half, it again loses focus towards the climax.

Balachandra comes to the town of Hallikote for studies. His college lecturer makes a strong impression on Balu and his group with his revolutionary ideas and his disdain for tradition and values.

Balachandra is in love with an innocent young girl Rukmini. The lecturer advises Balu not to value love and sentiments in life which makes Balu cheat the girl he loved.

Later he moves on to become a revolutionary unmarried college lecturer. In the college he is exposed by a well meaning lady lecturer Pavithra who makes him understand his mistakes.

Excellent performances by Rangayana Raghu, Radhika Pandit and the film`s hero Sreenagara Kitty is the highlight of the film. Pandit simply lights up the screen. She is very good in the song sequences too.

Daisy Bopanna is effective in a small role. All the other artists have performed well in their respective roles.

Mano Murthy`s compositions are good. The camera work of the film is strong.

"Olave Jeevana Lekkachara" is a film that will appeal to your intellect. It has some entertainment quotient also.