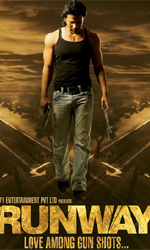 When a filmmaker doesn`t have any story to tell, he tries to perk up the narrative by using jump cuts, freeze frames and other technical wizardry - last year it was seen in "Woodstock Villa", this year it`s in "Runway".

"Runway" sets the message right at the very beginning that it is an exercise in futility.

Amarjeet Shukla, the lead protagonist in the film, becomes a contract killer to save the life of his lady love Deepal Shaw, who is dying due to drug usage. He comes in touch with people like Sharat Saxena who plays underworld English speaking kingpin who wears dark shades, is surrounded by those 80s style left over blue-n-white drums and announces - `I am not interested in your love story; I want brave people`.

Amarjeet`s friend, who introduces him to the Don also warns him - `He is a man of commitment, so be careful.`

It`s just that the `man of commitment` himself is nowhere to be seen in the entire second half as his henchman pairs up with Amarjeet to do rest of the killing. Worse, one doesn`t quite understand who is killing whom and what`s the purpose behind that?

So Amarjeet presses the trigger for the first time and just when he gets hold on a fake passport to fly back into India, courtesy Tulip, he decides to skip his flight and return to the mean streets.

By the way, Tulip plays a girl in a dance bar who `cannot be afforded`, as stated by one of her junior colleagues. She sings `bhojpuri` songs, speaks English, lives in Mauritius, fears a Pakistani don and falls in love with an Indian. A true ambassador of globalisation.

Talking about Mauritius, one needs to give a rap on the knuckles of the person who created that fancy software that plays on Amarjeet`s laptop. Mauritius is spelt as `Muritus` along with at least a couple of more English errors that is embarrassingly displayed on the big screen. Moreover, the film`s tagline `Love Among Gun Shots` isn`t syntactically correct either! But then who would have cared about such minor things when there are bigger and far more glaring loopholes in the films.

So what one gets to see is biggest contract killer in the entire globe, Lucky Ali, driving a bike on the streets of Mauritus and firing openly on poor Amarjeet.

If that wasn`t heroic enough, he also removes his helmet, proudly flaunts his revolver and keeps searching him on foot even as the entire marketplace makes way for him. He enters people`s households and hotel rooms unannounced, kills them in quick successions, always leaves Tulip unscathed and misses his target whenever Amarjeet comes in sight.

However, one chance and Amarjeet shoots him in a split second motion. Quite a feat, especially with a Mauritian super cop, who announces that `he won`t allow gang war to break in his city`, is left hardly impressed that a `common Indian` has managed to do what Interpol couldn`t for all these years.

At the end, he turns out to be even more powerful as he knocks down Amarjeet with three (or were they four?) bullets. Well, not bad.

Now if only he would have found him at the airport in the film`s beginning itself and done the honours there and then. That would have been some relief for a poor viewer who all this while was thinking of `running away` from this trash affair.