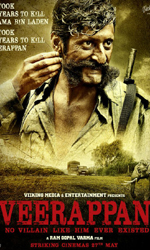 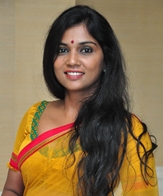 Presented in a docudrama style, Director Ram Gopal Varma's "Veerappan" is a true story on the life of the dreaded sandalwood smuggler, Koose Muniswamy Veerappan who was wanted by the police of Karnataka, Kerala and Tamil Nadu and was famously addressed as Veerappan. The film offers a dispassionate account of his life.

The film begins on a cynical note with a quote from Voltaire with states, "A society gets a criminal it deserves."

The script written by R.D. Tailang and Ram Gopal Varma, is based on narratives from N. K. Senthamarai Kannan, the Police Commissioner, who headed Operation Cocoon, an initiative launched by the Special Task Force of Tamil Nadu Police to nab the forest brigand and his associates.

The film too is narrated from the Police officer's point of view in a non-linear fashion starting from April 05, 2004 and captures the events of Veerappan's life till his death on October 18, 2004, in a drab manner.

Much of the screenplay is generic and one-dimensional in nature. Apart from killing, poaching of Elephant tusks and ambushing the police, it does not give any insight of Veerappan's personal life. While the first half of the film is engaging, the second half drags.

Sandeep Bharadwaj essays Veerappan's character with sluggish ease. It is amusing to watch him with his handle-bar moustache literally dress up and emulate Veerappan. But unfortunately, not much emphasise is given to him, as an actor.

With unflinching gaze, Sachiin Joshi plays the tough police officer from whose point of view the story is narrated. Except for flexing his muscles, he has nothing much to emote.

Usha Jadhav as Veerappan's wife Muthulaxmi is convincing. You empathise with her when she tells her landlady, Shreeya, "woh waisa aadmi nahin hai jaise police and press kehte hain."

Of the rest of the cast, Lisa Ray as Shreeya is a misfit, Nassir as the Police Commissioner is perfunctory. He just seems to be an extension of the character he plays on Television.

The character who stands out in a small but definite role is that of Kumar, the re-instated forest officer who coaxes Veerappan to step out of the forest to meet the LTTE Chief Prabhakaran.

The locales, production design which include designer Vishaka's costumes, are brilliantly captured by cinematographer Aniket Khandagale's lens. His lengthy shots panning the wild terrain, along with some top angle long shots are remarkable and worth a mention.

The computer generated images too, merge well with the live action drama.

Overall, "Veerappan" is a mediocre fare.

Veerappan is Indian docu -drama thriller based on the events leading to Operation Cocoon to capture or kill Indian bandit Veerappan. The film is all about the life events of Veerappan who
was a bandit of India. The story revolves around the search of Veerappan by a group of Police Officers headed by Kannan. Kannan is a non-conformist, one who would willingly flout rules as
long as Veerappan is captured.

The film begins directly with the planning of Operation Cocoon. This was a mission headed by the Commander of the Tamil Nadu Special Task Force, Vijay Kumar, who masterminded the final assault on Veerappan. Vijay Kumar appoints Kannan.

The plot tracks the team's attempts to corner Veerappan. Priya is by hired by Kannan to befriend Muthulakshmi, so that the STF can get closer to her husband Veerappan.

The goal is clear -Veerappan has to be lured out of the forest. Will Kannan be successful in his mission and will he be able to find Veerappan . 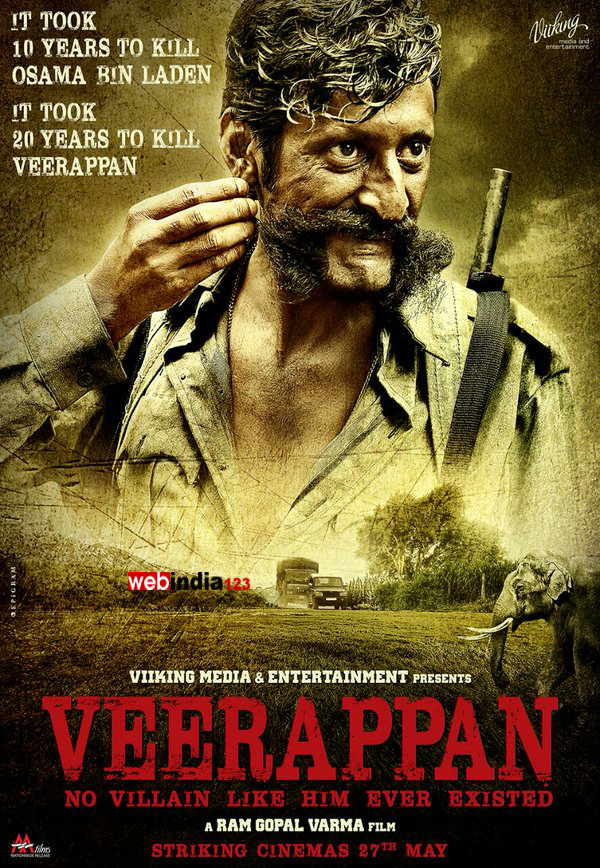