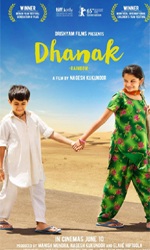 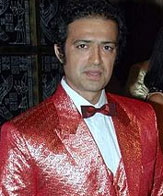 With all attention on the hyper-controversial drugged drama this week, this silent killer of a gem sneaks up on us, with the minimum of fanfare and maximum impact.

"Dhanak" is a very rare product of a breed of cinema where simplicity and intelligence come together in an unlikely marriage of excellence. The main characters are a little blind boy who is a brat and a whiner and a major drama king, and his elder sister, wiser beyond her years endlessly exasperated by her kid-brother's antics but committed to being his support and anchor as they set off to meet, hold your breath, Shah Rukh Khan who is committed to restoring his eyesight.

The journey is interspersed with an array of interesting encounters with characters who appear so much part of the landscape you wonder if Kukunoor decided to include them in his young travellers' journey just because they (the incidental characters) were around.

Do the siblings, on a cross-country trek through rural Rajasthan, meet Mr Khan? Let's just say "Dhanak" is a far better and more worthy tribute to the stardom and aura of Shah Rukh Khan than the recent "Fan" which messed it up by getting the superstar-fan relationship wrong in the second-half.

"Dhanak" doesn't strike one false note. The two young protagonists played by Krish Chabria and Hetal Gada are such natural-born actors you wonder where Kukunoor found them. The two children bring unconditional joy to the script. And they speak a language that is real, vital and believable. The conversations between the 8-going-on-9 year-old Chotu and his 11-year-old sister ring so true, it's like watching them without the camera.

As the two children set off on a cross-country journey to meet the superstar, Kukunoor's elegant simple and lucid screenplay weaves into the plot the kind of close encounters of the thundering kind that exposes the two kids into an incredibly expansive world of kindness and generosity.

Kukunoor shoots Rajasthan's desertscape with a reined-in luminosity, neither over-punctuating the topography for emotional impact nor underplaying it for the sake of counter-touristic brevity. Not since the cinema of J.P. Dutta has Rajasthan been shot with such skilful serenity. Chirantan Das is a poet masquerading as a cinematographer.

The film's other commendable component is the eventful music score by Tapas Relia. The songs and music urge little sightless Chotu's adventures into areas of sunshine even when the clouds loom large.

Barring one near-catastrophic encounter with kidnappers, Chotu and his protective sister never come face-to-face with peril. I wouldn't say that's a blind spot in the narrative. Good knows in a world that addresses itself to a drugged-out diabolism we need all the sunshine and positivity we can get. Without overdoing it, "Dhanak" offers ample doses of both.

No, you really can't pluck holes in Nagesh Kukunoor's enchanting excursion into the heart of innocence and salvation. This is a heartwarming ode to the dying spirit of the human and selfless compassion. Moving, funny and memorable, the two child actors are miraculous.

Myth, folklore and symbols can be interpreted in myriad ways that although the actual image is clear it throws up infinite possibilities just like the colourful rainbow. That's Nagesh Kukunoor's "Dhanak" for you - a captivating road film, packed with ample life's lessons.

Based on a story idea by Yusuf Shaikh, it is the tale of a blind boy, Chotu and his devoted sister Pari.

"Dhanak" is a sweet, unpretentious story of how to, "see the world not with your eyes, but with your heart." It also speaks of how anything is possible if you have faith.

Orphaned and living with their uncle and aunt in rural Rajasthan, Pari with child-like innocence, promises to take care of her younger brother and help him regain his eyesight before he turns nine years old.

Just two months before Chotu's ninth birthday, Pari is reminded about the promise when she notices a poster about eye donation, endorsed by her idol Shah Rukh Khan.

Soon she learns that Shah Rukh is shooting in Jaisalmer, which is about 300 kilometres from where they live. And knowing fully well that they won't be supported by their uncle and aunt, the duo sneak out from their home and set out to meet him. They travel across Rajasthan, in the belief that he is their only saviour who could help Chotu regain his eyesight.

The plot narrated in a straightforward, linear manner is uncomplicated and simple. It captures the innocence of the children and takes you across the state in all its glory. The characters too are distinct and well etched.

Their banter is real and full of innocent wit. There is warmth and understanding in the depiction of the sibling relationship. Their little squabbles and differences -- Chotu is a Salman Khan fan and Pari likes Shah Rukh Khan -- and their inescapable closeness is depicted lovingly.

The tale becomes doubly endearing due to the brilliant and uninhibited performances of the cast. Every actor plays their part to perfection.

Hetal Gada as Pari and Krrish Chabria as Chotu steal your heart with their flawless rendition of their characters. They are natural and completely at ease before the camera.

They are aptly supported by other actors in one scene roles, namely; Suresh Menon as the, "naata bhala aadmi" (a short good man) who helps them during their time of need, Bharti Achrekar as the gypsy clairvoyant, Ninad Kamat as the tout who makes money by fooling people, Vibha Chibber as Mata Sheera Wali, and Chet Dixon as the foreigner walking through the globe for peace.

On the technical front, the film is colourful, vibrant and appealing. DOP (Director of Photography) Chitranjan Das's camera work is remarkable. He captures the locales -- which include the sets designed by Production Designer Devika Bahudhanam, the costumes designed by Aparna Shah and the finer nuances of the actors -- with precision.

The background score along with the songs is pulsating and flows in sync with the narration. The editing by Sanjib Datta is flawless.

Overall, "Dhanak" is an enthralling film that makes you smile.

Pari has promised her little blind brother Chotu that she'll help get his eyesight back before he turns 10. When she spots her favorite star Shah Rukh Khan on the poster for an eye-donation drive, she is convinced her hero will help her on her mission.

And so Pari sets out with Chotu on a magical journey through Rajasthan where they encounter a bunch of colourful characters.

DHANAK is an enchanting fable that reinforces the belief that life is beautiful. Winner of multiple international awards including the Grand Prix at the Berlin Film Festival (Generation K Plus section), DHANAK releases in Indian cinemas on 10 June, 2016. 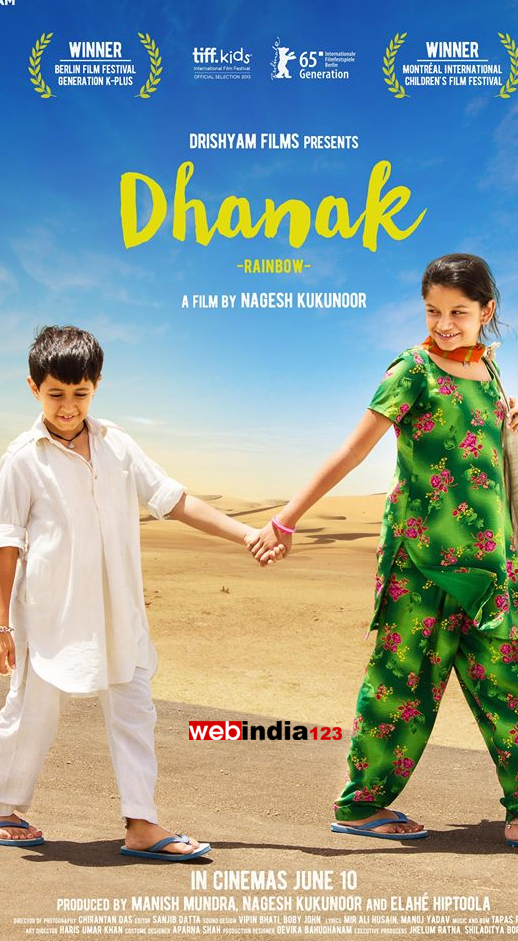