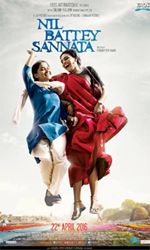 Swara's spontaneous unrehearsed seemingly uncomplicated interpretations of the most layered emotions is not only exemplary, it is a one-woman acting school on how not to like you are …well, acting.

There are many sequences in the very oddly titled "Nil Battey Sanatta" where Swara sweeps you into her character's innermost world of melancholy and despair without making you drown in maudlinism.

Playing a domestic help Chanda who dreams of making her stubborn spoilt daughter Apeksha (confident newcomer Riya Shukla) into something bigger than destiny decrees for the poor, Swara delivers a virtuoso performance. She gets the minutest of Chanda's feeling on screen without screaming for attention.

Of course it helps that Swara has stunning support from her co-stars. Chanda's rapport with her thoroughly unlikable daughter, and more specially the easygoing kinship she shares with her employee (Ratna Pathak Shah) are signs of maturity and wisdom way beyond the film's placard-flashing theme on female literacy.

Yes, there is a message. And a very basic one at that. Girls need to get educated. Period.

Happily, the film is bogged down neither by its pedantic ambitions of making a statement, nor by the protagonist's financially challenged status in society. Yes, she is a domestic help. But her employee treats her as an equal. Yes, she lives in a one-room chawl in Agra with her daughter. But the two have a television set blaring out cheesy hits which they dance to when they want, and Chinese meals are ordered for celebrations when the occasion arises.

Director Ashwiny Iyer Tiwari keeps it simple. Simple and straight. Thankfully there are no bouts of furious sentimentality. Swara plays Chanda with feisty positivity and yet this is not a character or film that romanticizes poverty. It isn't even a lyrical celebration of destitution the way Satyajit Ray's "Pather Panchali" or Mira Nair's "Salaam Bombay!" was.

"Nil Battey Sanatta" occupies a world of half-finished dreams and smothered aspirations with a spirit of positivity that is the opposite of despair. Apart from a few false notes (for example the sequence when the daughter pipes in during class to eulogize over her mother's struggles, or that utterly unconvincing sequence where Chanda visits the excessively kind collector of the district, played with a sweet sincerity by Sanjay Suri, the debutante director strikes no false notes, covers no ground that the plot needn't cover.

The casting goes a long way in adding miles to the director's long-legged uncluttered narrative. Of course Swara holds centrestage confirming her place among the most significant contemporary actresses currently on the scene. But the rest of the cast, including the young boys and girls in the class that mother Chanda and daughter Apeksha attend together, are outstanding.

Ratna Pathak Shah and Pankaj Tripathy (the latter as the extremely benign school principal) remind us what capable actors can do to a worthy film. Riya Shukla as the stubborn daughter slips into an unlikeable part. It's the kind of sullen sulky daughter's role that Swara had played with conviction just two years ago in "Listen... Amaya".

The smallest of parts in this film are beautifully carved out. Chanda's neighbour Razia is barely there on screen. But she matters. Or Ratna Pathak's husband -- barely a shadow in the background. But nonetheless a character.

This morally uplifting inspirational heartwarming fable is a must watch, if only to see how difficult it is to be simple. And how much we miss those simply told tales of life by Hrishikesh Mukherjee and Basu Chatterjee.

Nil Battey Sannata is an emotive narrative close to our spirit. Dressed in an artistic backdrop, it is about a mother and daughter bitter sweet relationship laced with fact-fiction and the color of sentiments. An organic story that creates empathy with the characters and catalyze social change. The film celebrates that, irrespective of one’s past, everyone has the right to dream, inspire and change his or her present for a positive future.

This is Ashwiny Iyer Tiwari's debut film, which she has dedicated to her own mother. Chanda is played by Swara Bhaskar of Raanjhnaa and Tanu weds Manu fame. The Film also features, Ratna Pathak Shah and Pankaj Tripati.

The Film has already garnered much appreciation in various film festivals. It was the opening gala film at the Silk Road Internation Film Festival held at Fuzou, China, where Swara was awarded the best actress award. The Film also made it to the hot ticket screening at BFI London and has also been selected for Rome film festival Alice nella cita.

Nil Battey Sannatta is produced by Colour Yellow Productions and Jar Pictures in association with Opticus inc. The film will be distributed by Eros International. And will soon release in India. 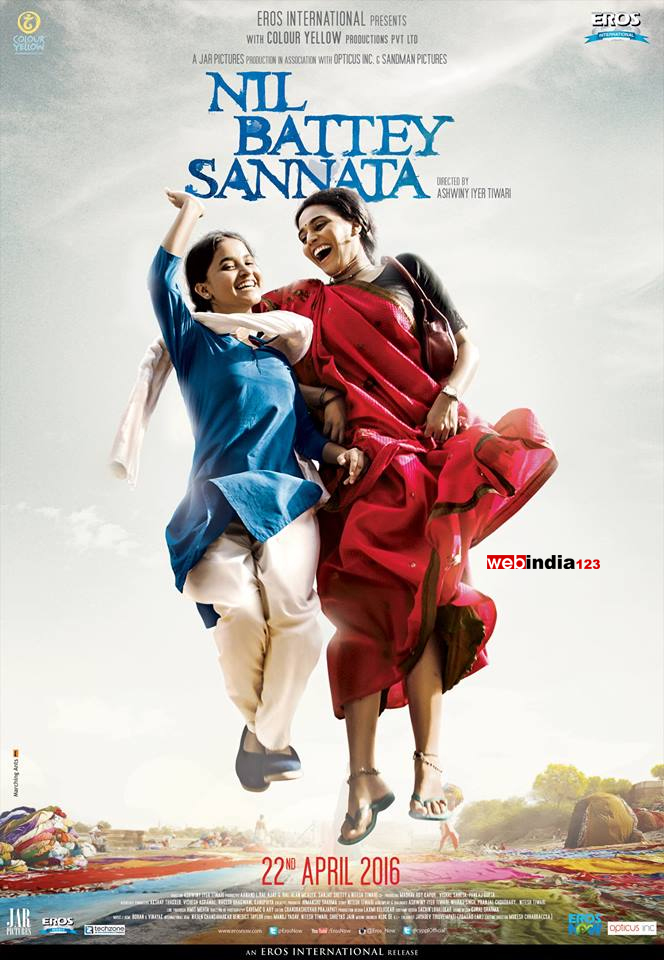