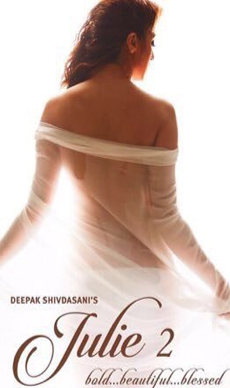 Films about the movie industry tend to demonstrate the sleazy side of showbiz - but with a gentle touch.

"Julie 2" goes about it with hammers and tongs. The story of the rise and fall of an ambitious actress has a familiar ring to it. A lot of the experiences that Julie (Rai Laxmi) goes through seem inspired from the events that transpired in the life of actress Nagma. The whole episode where Julie has a roaring affair with South Indian superstar Ravi Kumar (Ravi Kissan, delightfully Telugu in his speech and manner) is borrowed from Nagma's link-up with Sarath Kumar, as is Julie's subsequent link-up with a cricketer which ends rather crudely with the cricketer declaring to the shocked actress that he can't marry her as she has been with too many men before him.

"Not that I expect you to be a virgin. But there has to be a limit," he drawls.

This is where the audience either hopes for the character to be killed or commits collective suicide.

Then there is veteran actor Anant Jog who smacks his lips as though he has just found a juicy chicken leg when he meets the heroine.Subtlety is not a quality that the characters of this film value. Writer-director Deepak Shivdasani strings together the betrayals of the men in Julie's life with a sledgehammer impact. There is no ambivalence in the way Julie's men are presented in the plot.

Apart from her faithful man-Friday endearingly named Ambani, all the men in Julie's life are jerks, lechers and potential rapists. By the time she sobs: "No one wants to love me, they all want only my body", Julie's slump into self-destruction is nearly complete.

The only man who seems to genuinely care for her is her first film director played with an affectionate swagger by Nishikant Kamat. One of the film's most compelling episodes has Kamat ticking off a sleazy film financier who openly propositions the shocked and tearful Julie, by hinting at a sexual liaison with the financier's 18-year old sister.

At times like this, the narrative gathers its wits to deliver a telling blow on the grime behind the glitz of show world. At a time when the predatory culture of Harvey Weinstein has come out in the open, "Julie 2", in its subverted way, tells us why the sexual predators of Bollywood cannot be exposed.

The film deploys an unusual level of melodrama to create an aura of progressive ruination around its protagonist. It finally slumps to a groaning halt. But not before executing an end-game that attempts to take the saga of the casting couch to a suspenseful level. Debutante Rai Laxmi stands impressively tall even as her character crumbles to the ground. She has a fairly firm grip over her character's messy life and proves herself quite a "chick' off the old oomphy block".

It is a little startling to see seasoned actors like Pankaj Tripathy, Rati Agnihotri and Ravi Kissan pitching in with bombastic performances. But then, bombast is the need of the hour. "Julie 2" is an old-fashioned high-pitched melodramatic take on an actress' journey from zero to wow. It has plenty of unexpected twists and turns in the plot, not all of them convincing. The narrative neatly balances the engaging and the corny. 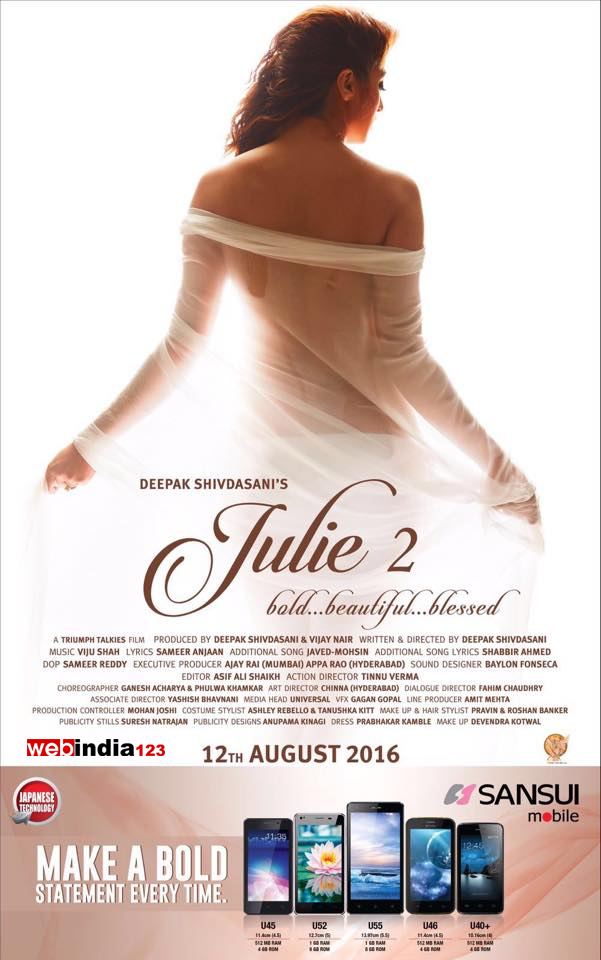